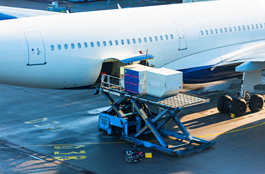 However, capacity remains unable to meet demand as a result of the loss of belly cargo operations on passenger aircraft that have been parked.

Global demand, measured in cargo tonne-kilometers (CTKs), fell by 20.3% in May (-21.5% for international operations) compared to the previous year. That is an improvement from the 25.6% year-on-year drop recorded in April.

Global capacity, measured in available cargo tonne-kilometers (ACTKs), shrank by 34.7% in May (-32.2% for international operations) compared to the previous year, a slight deceleration from the 41.6% year-on-year drop in April.

Belly capacity for international air cargo shrank by 66.4% in May compared to the previous year due to the withdrawal of passenger services amid the COVID-19 crisis (up slightly from the 75.1% year-on-year decline in April). This was partially offset by a 25.2% increase in capacity through expanded use of freighter aircraft.

The cargo load factor (CLF) rose 10.4 percentage points in May. This was a slight decrease from the 12.8 percentage point rise in April. However, the extent of the increase suggests that there is still pent-up demand for air cargo which cannot be met due to the continued grounding of many passenger flights.

Global export orders continue to fall but at a slower pace. The Purchasing Managers Index (PMI) tracking new manufacturing export orders improved from the trough seen in April despite remaining in contractionary territory.

“Air cargo demand is down by over 20% compared to 2019. And with most of the passenger fleet grounded capacity was down 34.7%. The gap between demand and capacity shows the challenge in finding the space on the aircraft still flying to get goods to market. For that the prospects for air cargo remain stronger than for the passenger business but the future is very uncertain. Economic activity is picking up from April lows as some economies unlock. But predicting the length and depth of the recession remains difficult,” said Alexandre de Juniac, IATA’s Director General and CEO.

Middle Eastern carriers reported a decline of 25% year-on-year in May, a significant improvement from the 36.2% fall in April. Despite a number of carriers in the region maintaining some cargo capacity, traffic on all key routes was low. International capacity decreased 24.4%.

African airlines posted the smallest contraction of any region in May, extending a run of resilient performance. Africa has now ranked in the top two regions for 15 consecutive months. Year-on-year international demand fell by 6.3%. The small Africa-Asia market was particularly resilient in May, down only 0.4%. International capacity decreased 37.7%.

Asia-Pacific airlines saw demand for international air cargo fall by 21.3% in May 2020 compared to the same period a year earlier. This was a solid improvement over the 25.2% drop in April. Seasonally adjusted freight volumes also rebounded slightly in May and have now reached 75% of their pre-COVID-19 crisis levels. Shipments of personal protective equipment (PPE) are helping support airlines in the region. International capacity decreased 31%.

North American carriers reported a single digit fall in international cargo demand of 9.0% year-on-year in May. This was the smallest contraction of all regions except Africa. The resilient performance is due to shorter and less stringent lockdowns in certain regions, the large freighter fleets of a few regional airlines as well as robust US-China trade volumes. Demand on the large Asia–North America route was down only 0.4% year-on-year in May. International capacity decreased 28%.

European carriers reported a 29.7% annual drop in international cargo volumes in May, the weakest performance of all regions. Limited manufacturing output and lockdowns through to mid-May contributed to the weak performance. International capacity decreased 40.1%

Latin American carriers posted a 22.1% drop in year-on-year international demand. This was a significant improvement from the 40.7% decline in April. The COVID-19 crisis is particularly challenging for airlines based in Latin America owing to strict lock-down measures. International capacity decreased 39.5%.

A Smart Supply Chain Is an Efficient One