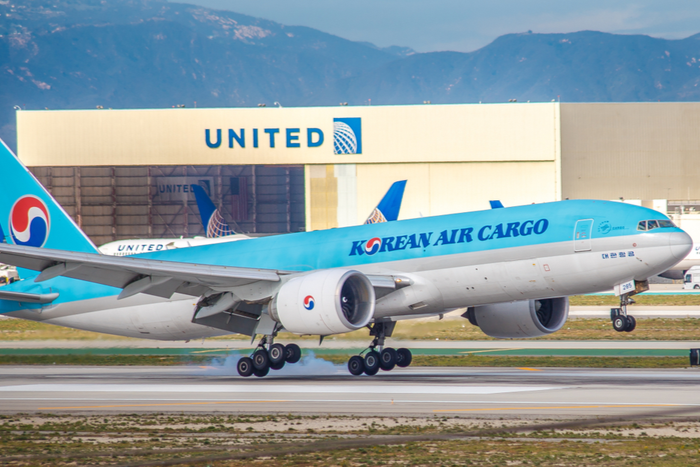 Freighters will continue to be the primary mode of transport for air cargo in the medium to long-term. Photo credit: Shutterstock.com.

Belly space in the lower decks of passenger aircraft usually provides more than 50 percent of the available global cargo capacity, but travel restrictions have kept most of those planes on the ground since March. IATA recently predicted travel would reach 2019 levels by 2023, but Tuesday extended its grim forecast by another year as COVID-19 infections spike in the United States and in developing countries.

In what may be a response to rising US infections and tight ocean capacity, air cargo spot rates from Shanghai to North America have again begun to increase, climbing 6.4 percent sequentially this week to a six-week high of $4.97 per kilogram, according to the TAC Index. That’s well below the record high of $12.27/kg that was reached on May 18, but still 34 percent higher than in the same week last year.

Forwarders also believe the air cargo industry is unlikely to see a return of significant belly cargo capacity anytime soon, keeping upward pressure on rates. A spokesperson for CEVA Logistics told JOC.com that air freight capacity would not return to pre-COVID-19 levels “until sometime down the track.”

“As long as there are travel restrictions and passenger aircraft are grounded, we will not enjoy the capacity we had before the crisis,” the CEVA spokesperson noted. “The rules of the game have changed, and the air freight market is expected to be capacity-driven until 2023.”

Detlef Trefzger, CEO of Kuehne + Nagel, said the belly cargo that was coming back into the market was in short- and medium-haul travel. “And that doesn’t help us. That is not where we transact the majority of our business,” Trefzger said during Kuehne + Nagel’s first-half earnings call July 21. And for international shippers, that short- and medium-haul belly capacity won’t alleviate tightness and rate pressure on long-haul routes.

“I would expect in the second semester that 60 percent to 70 percent of all volume will be transported by freighters,” he added. “Belly will not recover soon. It will take maybe two years before we see significant network activity that allows for using belly capacity again.”

Paul Tsui, managing director of logistics provider Janel Group of Hong Kong, agreed prices on the trans-Pacific were on the high side because cargo freighters remained the main source of capacity at the moment, and he did not see that changing soon. “My expectation is that COVID-19 [impacts] will be with us for the whole year and will likely cross over to 2021,” he said.

Airlines based in Asia carry almost 40 percent of the global air cargo tonnage, much of that below decks of widebody passenger planes. In June, however, the Association of Asia Pacific Airlines (AAPA) reported a 98 percent decline in the number of passengers compared with the same month last year. Air cargo volume was down 20 percent in June, despite all available freighter aircraft being in service.

“The prospect of a recovery in travel markets during the second half of the year is increasingly uncertain, as governments grapple with a resurgence of local infections, with the re-imposition of community lockdowns and further tightening of travel restrictions,” Menon said in a statement Tuesday.

The shortage of belly capacity will become particularly acute on the trans-Pacific and Asia-Europe trades in the fourth quarter with several smartphone and electronics product launches scheduled, said Michael Steen, chief commercial officer at Atlas Air Worldwide. He told a webinar earlier this month that the product launches would give the industry a traditional peak season at the end of the year.

But he warned that rising demand for general air cargo in a capacity-constrained environment in the fourth quarter could clash with the development of a COVID-19 vaccine. Should a vaccine be ready for public use later this year, it would require a massive distribution effort that the air cargo supply chain would struggle to support, he said.

“In the near-term, we will have to get the vaccines to the market,” Steen told the webinar. “We will see spikes driven by commercial demand, and the vaccines would be layered on top of that.”