When I last wrote on BlackLine (BL) more than a year ago, I thought that this was a company I would never be bullish on. At the time, BlackLine was forecasting its revenue growth to fall to the low 20s; profits were nascent and seemingly far from hitting breakeven, and its valuation was moderately high at a double-digit forward revenue multiple.

Fast forward to 2020. BlackLine has reported three quarters of fiscal 2019 so far, and its results have been far better than expected. The growth deceleration that the company was forecasting has not materialized (in fact, growth has even picked up), while BlackLine continues to win accolades for being a “best-in-breed” software product for its niche of the finance/ERP market, which is financial close (helping corporate finance departments and CFOs reconcile and close the books at the end of each accounting period). At the same time, BlackLine’s stock price – though enjoying a healthy ~25% gain in 2019 – hasn’t moved terribly out of line with its fundamentals, considering when many of its mid-cap SaaS peers have seen share prices double on precious little fundamental improvement.

With this in mind, I think it’s a great time to revisit the bullish thesis for BlackLine. In my view, the tailwinds for this thesis rest on three core components:

Despite my view that the market (and especially growth stocks) are headed for a correction in 2020, I believe BlackLine’s valuation is modest enough to weather a downturn and give investors continued exposure to growth. At present share prices near ~$60, BlackLine trades at a market cap of $3.35 billion. After netting out the $596.5 million of cash on its balance sheet against $378.9 million of debt, the company is left with an enterprise value of $3.13 billion.

For the following fiscal year (FY20), Wall Street analysts are expecting consensus revenues of $346.7 million (per Yahoo Finance), representing 21% y/y growth over consensus of $286.6 million for the current year (for which only one quarter remains). Given BlackLine just exited Q3 at a 28% y/y growth rate, I think a 21% y/y growth rate for FY20 is unreasonable – in my view, a 24% y/y growth estimate, or $355.4 million, is far more likely.

Against this revenue view, BlackLine trades at a valuation of 8.8x EV/FY20 estimated revenues. While certainly no bargain stock, BlackLine’s combination of mid-20s revenue growth and positive FCF margins, plus its cornering of a very niche market in the financial software sphere, gives it plenty of headroom to run.

Much better-than-expected growth in 2019

Much of my improved outlook on BlackLine has to do with its superior growth rates in 2019. As shown in the table below, BlackLine has generated $208.7 million in revenues so far in 2019, up 26% y/y.

It’s on an upward trend, too – BlackLine’s Q3 revenues grew at 28% y/y, accelerating two points over the prior quarter and far surpassing Wall Street’s expectations of +23% y/y growth. Recall that BlackLine’s original revenue outlook for the full FY19, $275-$280 million, called for only 22% y/y growth. Needless to say, the company is trending well above that.

One important driver of revenue growth in 2019 has been a technical partnership and integration with S/4HANA, which is the German software giant’s flagship ERP system. Per CEO Therese Tucker’s remarks on the most recent Q3 earnings call:

We see continued demand for BlackLine among SAP customers with an increasing number of conversations centering around BlackLine as an important first step in the S/4HANA journey. With less than one year under our belt, we believe this partnership remains a large global opportunity over the long-term.”

This partnership with SAP not only represents an opportunity for organic revenue growth, but as SAP and BlackLine become more closely integrated, we could see SAP bid for BlackLine outright, as it has done in the past with companies like SuccessFactors and Ariba.

On its own, however, BlackLine still believes its growth opportunity is vast. It estimate its TAM at $18.5 billion (in the financial close space alone, not counting any product extensions to other areas of finance software), putting its penetration at just under 2%: 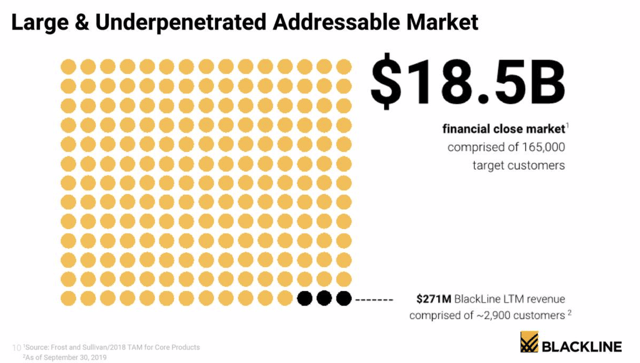 Equally important as BlackLine’s revived growth rates is the fact that the company has also managed to make progress toward breakeven profits. It’s safe to say that investor appetite for cash-guzzling tech startups has completely faded, so BlackLine’s ability to balance growth with profitability is a major win on its scorecard.

As seen in the chart below, BlackLine has been able to consistently lower its operating expenses as a percentage of revenues. Year-to-date, operating expenses have fallen two points as a percentage of revenues versus the prior year. Key to note here is that sales and marketing, BlackLine’s largest category of expenses (the same is true of virtually every enterprise software company) continues to find increased efficiency: 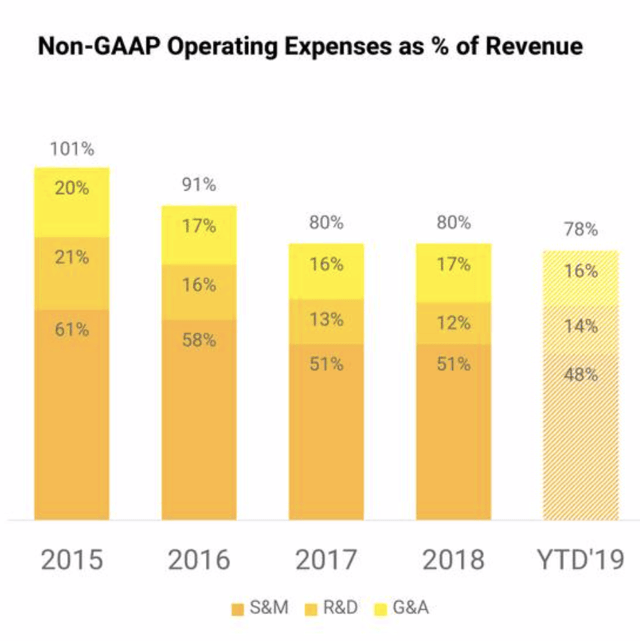 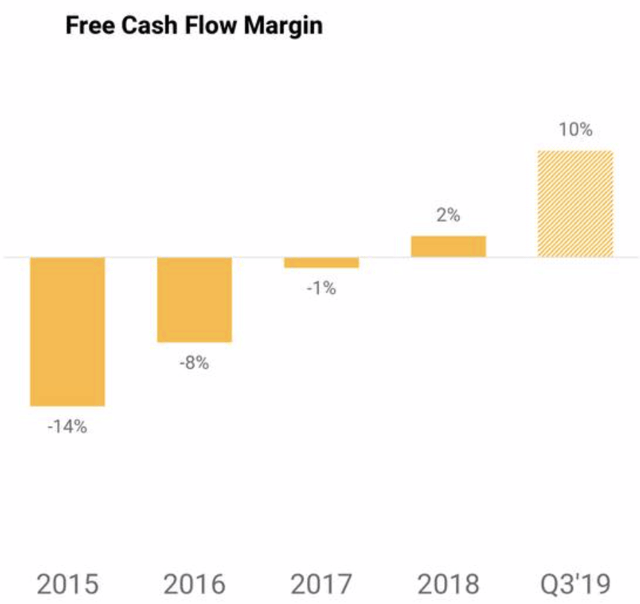 It’s also worth mentioning that BlackLine’s exclusive focus on the financial close process has won it tremendous technical accolades in the industry. Gartner, arguably the most respected neutral reviewer in the enterprise software market, has continued to name BlackLine a Leader in its annual Magic Quadrant: 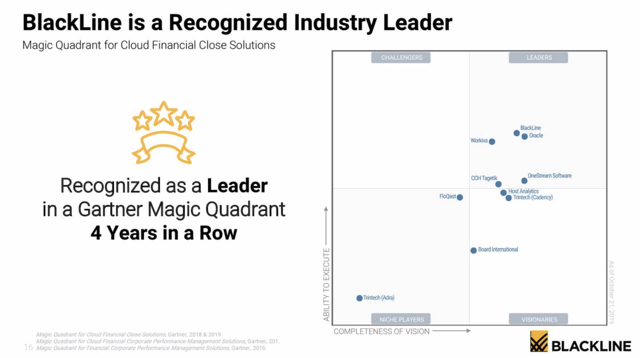 Technology expertise is perhaps the #1 determinant in being courted for a bolt-on acquisition. We’ve already discussed earlier how BlackLine has driven growth through a technical partnership with SAP. BlackLine’s argument is that while ERP systems are good at general financial management, only BlackLine’s specialized focus on the financial close can provide true support in that area. 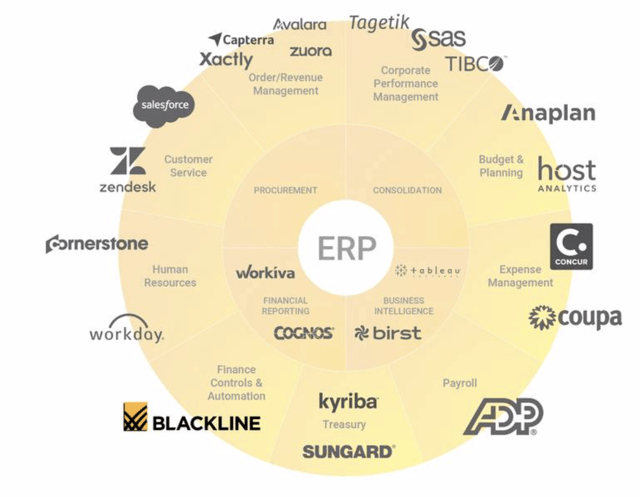 Naturally, SAP is BlackLine’s most likely acquirer, though Oracle and Workday (WDAY), each also vying for domination and breadth in the ERP space, would also be likely buyers. With an enterprise value of only ~$3 billion and a single-digit forward revenue multiple, BlackLine would be a reasonable M&A target for any of these large-cap software companies looking to grab more market share in ERP.

Improved performance, strong free cash flows, and continued technical leadership make BlackLine a solid growth pick for 2020. Though certainly not a cheap stock, BlackLine’s balanced growth/profitability profile will shield it from excessive losses in a recessionary scenario, while valuation multiple expansion and M&A possibilities are the primary catalysts to the upside.

Disclosure: I/we have no positions in any stocks mentioned, but may initiate a long position in BL over the next 72 hours. I wrote this article myself, and it expresses my own opinions. I am not receiving compensation for it (other than from Seeking Alpha). I have no business relationship with any company whose stock is mentioned in this article.