Nordstrom (NYSE: JWN) just made a bold move by unveiling a multimillion-dollar enterprise and moving into a market where other fashion retailers are struggling. The company’s flagship New York City store, which opened on Oct. 24, was planned well in advance of Barneys’ Chapter 11 announcement, and it now has a chance to ride on the shoulders of the displaced designer chain.

Nordstrom became a household name across the West Coast in the 1970s and 1980s, opening stores in major cities and gaining a reputation for great customer service and merchandise options. It has won the top spot for the past six years in the annual Market Force Information survey of retail stores for a host of reasons, including clothing size availability, value, checkout speed, and store atmosphere. Clearly, management knows what it’s doing. 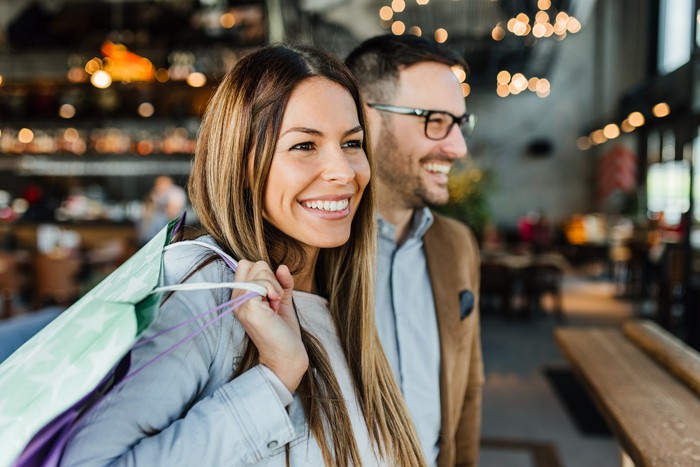 One market it didn’t approach for a long time, however, was New York, where shoppers either didn’t know it existed or thought of it as the West Coast answer to Macy’s (NYSE: M) and Bloomingdales.

That all changed in 1995, when Nordstrom opened in Westchester, upstate from New York City, after it opened its first East Coast store in 1988. The company continued to expand with stores in the metro New York and New Jersey area but never stepped into the shopping hub of Manhattan.

Now that’s changed, too, and Nordstrom has recently opened a flagship store in the heart of the luxury shopping district of 57th Street, alongside the most expensive brands in the world, such as Bergdorf Goodman, Hermes, Louis Vuitton, and Prada.

Why did Barneys go under?

Barneys was one of the most expensive designer fashion stores in New York City. It was an industry innovator, introducing top names such as Giorgio Armani into the U.S. market and creating a shopping destination with a restaurant and beauty salon on site.

Barneys also expanded throughout the 1980s and 1990s, moving from a flagship store in downtown New York City to upscale Madison Avenue and opening stores in California, Boston, Dallas, and even as far away as Japan. But with shopping moving online and a spike in the Madison Avenue store rent, from $16.2 million to $27.9 million a year, the company folded and was recently bailed out through a deal with Authentic Brands, which is known for buying out and licensing struggling brand names. The company will license the Barneys name to rival Saks Fifth Avenue, owned by Canada’s Hudson’s Bay Company (OTC: HBAYF), which will house Barneys shops in its stores.

Why Nordstrom has the ability to do what Barneys couldn’t

If Barneys couldn’t make it, why should Nordstrom’s new store, a seven-minute walk from the Barneys location, succeed? The Nordstrom concept is, in fact, very similar to the Barneys model, which was comprised of individual brand “shops” that were designed by top names. Barneys was a much-loved name by New Yorkers who saw it through its transformation from downtown chic to uptown and upscale. Will they embrace Nordstrom?

But Nordstrom indeed has a plan. It’s taking the Barneys concept and expanding it, with a British-themed Burberry store and restaurant, a Nike x Nordstrom shop with an exclusive Air Jordan launch, and six other eateries in the store’s seven-floor structure.

The company is pairing the new store with two new “Nordstrom local” shops, a strategy it’s introducing in other markets as well. The model is that the large and the small play off of each other, giving customers a complete experience where all of their retail needs are met. The smaller locations offer a more curated selection, fast order pickup, personal stylist services, and leather accessory repair, while the flagship store offers an enormous range of the newest designer styles and the total encounter with luxury shopping.

Also, Nordstrom has engineered an excellent transition online where other retailers are failing. While total second-quarter sales decreased from the year before, digital sales increased 4% and accounted for a full 30% of the company’s business. And, incidentally, New York is the company’s largest digital market. This is a third prong of the total Nordstrom experience, where customers can check online and buy in-store and vice versa, or they can order online and pick up in store.

Lastly, going back to the beginning, customers love the Nordstrom experience. If any retailer can snag Barneys expats, it’s likely to be this new kid on the block.

10 stocks we like better than Nordstrom
When investing geniuses David and Tom Gardner have a stock tip, it can pay to listen. After all, the newsletter they have run for over a decade, Motley Fool Stock Advisor, has quadrupled the market.*

David and Tom just revealed what they believe are the ten best stocks for investors to buy right now… and Nordstrom wasn’t one of them! That’s right — they think these 10 stocks are even better buys.