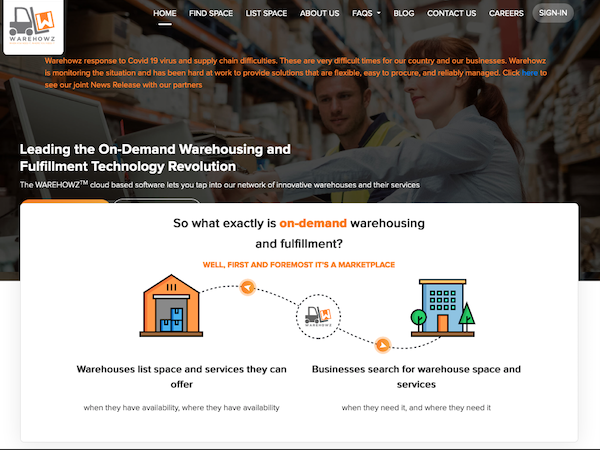 Warehowz has lined up $1.3 million in new capital to improve its platform and hire more workers. (Screenshot)

A local company that pairs warehouses with businesses in need of storage space has stockpiled seven figures’ worth of fresh cash.

The company, which formally rolled out its service in 2019, operates as an online marketplace that brings the sharing economy to the world of warehouse logistics. Users with warehouse space to spare post notices to be seen by businesses that need extra space in a service similar to Airbnb. Warehowz caters to businesses with short-term, sudden or uncertain warehouse needs, such as startups and seasonal businesses. It makes money by pocketing a percentage fee on each transaction.

Warehowz kicked off the capital raise in April, gathering funds from at least 10 investors, according to an SEC filing. Among those investors is Estes Express Lines, a Richmond-based freight transportation provider.

CEO Darrell Jervey said the capital infusion will allow it to improve its web interface and ability to integrate with other data systems. The company also aims to grow its workforce from eight to 20 full-time equivalent employees by year-end, he said.

Business has been on an upswing for Warehowz, despite the havoc the coronavirus pandemic is wreaking on the economy. Jervey said site usage has increased monthly, and has added 50 to 100 new warehouses a month.

“Our business is built on helping people in times of change and this current environment is nothing but that,” Jervey said.

Warehowz has more than 600 warehouses offering a total of 32 million square feet of available space on its site. The company has a presence across the United States, as well as in southern areas of Canada.

Warehowz is based in Chesterfield County, where it moved after it occupied space shared with Jervey’s former company Baby Fanatic, which manufactures licensed sports merchandise for babies and toddlers. Jervey sold that company in May.