Could the cargo bike market match light van sales in the next decade?

Extending this week’s coverage of the cargo bike market, Richard Armitage, chair of the European Cargo Bikes and Cycle Logistics Experts Group loads us up with insight on the trend and its steady transformation on UK shores.

Cargo bike specialists will be aware that recent data showing spiking sales did not happen by accident. Over the last decade, an immense effort has gone into pushing cargo bikes and cycle logistics into the limelight where they currently remain. 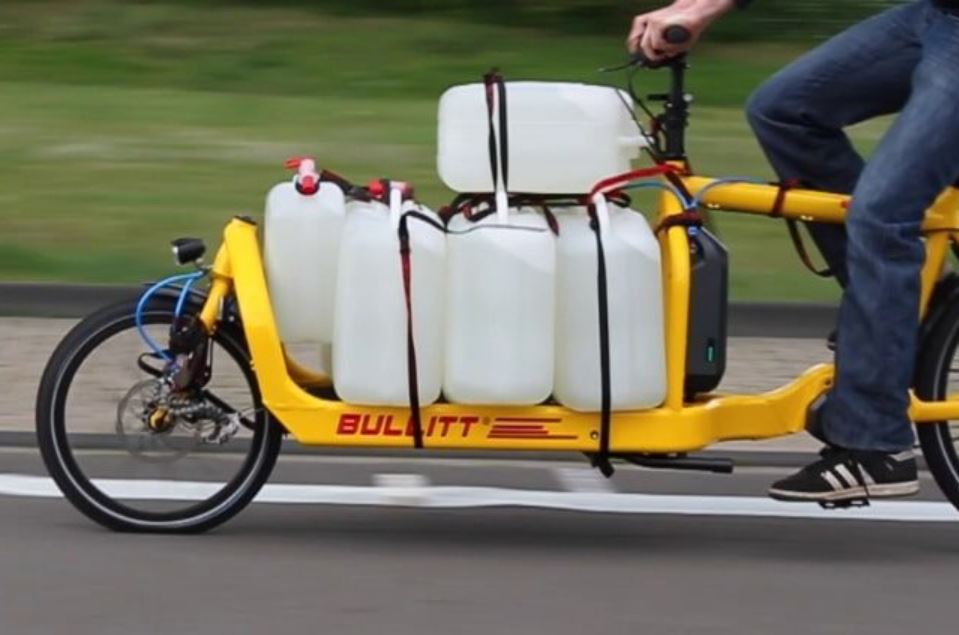 With sales increasing at over 50% a year, cargo bikes are deserving of the headlines. But how have we arrived at this point? The answer lies in years of development at last coming to fruition, with improvements in design, build quality, supply and marketing all playing their part. At the same time, the cargo bike is very much a product whose time has come: it is zero emission, quiet, safe, and efficient, exactly what is needed in the drive for liveable low carbon cities.

Working out the market size for cargo bikes is not for the faint-hearted. The FGM team in Graz (see ‘Growth through collaboration’ below) kicked off with an analysis showing that in EU cities 51% of all motorised private and commercial trips related to goods transport could be done by bicycle.

This is the scale response required to reducing motorised traffic in our towns and cities, if the targets promised by the European Commission President Ursula von der Leyen in the European Green Deal (and similar climate change and economic recovery plans adopted by countries around the continent) are to be met.

For many years the cargo bike had very low visibility, with little media exposure. Today, there is a tried and tested promotional toolkit available.

Subsidy schemes designed to kick-start a local, regional or national market, have proved very successful. In the UK, the Department for Transport’s eCargo Bike Grant Fund for businesses and organisations has awarded £2m in grants. Interest generated by the Fund lead to 58 English councils submitting bids worth £4.2m in March 2020, of which the Fund grant aided £1.6m. The UK government is left with a positive problem of whether to find additional funds for the remaining £2.6m of ‘shovel-ready’ proposals. Across Europe, however, cargo bike subsidy levels have yet to come anywhere close to the thousands (€ or £) being offered to people buying an electric car.

Try-before-you-buy schemes are working well in several different formats. Notably, the Edinburgh Cargo Bike Library, operated by Sustrans Scotland, is supplying a Carla Cargo electric-assist bike trailer to the team building the Edinburgh tram extension, enabling them to maintain deliveries in streets temporarily closed to traffic whilst the line is built out to Leith. The Team London Bridge business improvement district operates a very successful programme contacting businesses and organisations direct and enabling them to use cargo bikes for their everyday operations. Other schemes organise cargo bike loans to families or even groups of families, usually involving in a keener resident volunteering to take care of the cargo bike. Dutch company Cargoroo has a service operated similar to App-based public bikeshare schemes.

On 20 January 2020, work began on a new European cargo bike standard. CEN held the inaugural meeting of Working Group 9 (Cargo Bikes) of Technical Committee 333 (Cycles) in Delft, the Netherlands. Erik Driessen of Dutch cargo bike manufacturer Urban Arrow is WG9’s leader. The Cargo Bikes Experts Group is taking a leading role in the development of this standard, with several members formally accredited by CEN, including Arne Behrensen of cargobike.jetzt, who is representing the European Cycle Logistics Federation.

There are already national standards published in Germany (DIN) and France (NF). The vitality of the growing cargo bike market is guaranteeing a lively debate between cargo bike manufacturers, retailers and users about what the new standard should contain. Everyone is agreed that safety has to be a prime concern, but the devil will be in the detail, with different positions being taken on cargo bike width, length and payload. The Cargo Bikes Experts Group has just launched a survey seeking views on all these subjects.

There is considerable commercial advantage to be gained from successfully deploying cargo bikes. No parking fines, no parking restrictions, free flowing even when there is heavy traffic, and able to access areas where cars and vans are not permitted. As a result, third party cycle logistics companies are springing up in many towns and cities.

Businesses needing goods transport as part of their service provision are also turning to cargo bikes, whether these are plumbers, ice cream sellers or window cleaners.

UPS, the US-based global courier, already uses cargo bikes extensively in its networks, in cities like Hamburg, Germany and Dublin, Republic of Ireland. In June 2019, during the Dublin ECLF Cycle Logistics Conference, UPS launched the Breathe, a four-wheel pedelec (fully compliant with the UK Electric Assist Pedal Cycle regulations) that in style but not scale mimics many of the functions of UPS’ classic urban delivery fleet.

Peter Harris, UPS’ International Sustainability Director, attended the launch of the Cargo Bikes Experts Group in October 2019. He revealed that of its 119,000 fleet, almost 8% are alternative fuel or advanced technology vehicles (including cargo bikes). Collection and delivery is all about electrification and cycle logistics, with long haul concentrating on renewable natural gas.

Since 2017, UPS has been trialling an on-street micro-hub in partnership with Dublin City Council. The demountable truck body occupies what were car parking spaces. This is served by 2 e-trikes, one conventional trike and walkers, which have substituted for 4 ICE vehicles, With 500 packages per day removed from the ‘ICE’ van system, UPS is claiming a 40% CO2 reduction.

It is the case that cargo bike operation, whether for domestic use (see Cargoroo’s App-based locking and hire system) or for commercial and organisational use, is increasingly going to be integrated digitally with the world around it. It is no surprise to find digital innovators are members of CIE and the Cargo Bikes Experts Group. Storeshippers, for example, arranges ship-from-store logistics services in the USA, UK, France, Germany, Belgium and the Netherlands in partnership with specialized local eco-friendly couriers. CIE also has a separate  Connected Cycling and ITS Experts Group to which cargo bike market labels are invited to join.

European cargo bike manufacturers have responded to the rising sales volume. In early 2019, cargo bike dealers and distributors were surprised to receive notices from their suppliers of delivery times exceeding 26 weeks. Mounting evidence of the pressure to increase volumes was apparent at the International Cargo Bike Festival in Groningen, the Netherlands, in 14-16 June 2019. There the talk amongst exhibitors was consistently about significant investment being made or imminent in new production lines and increased production.

Since then, larger volumes have begun to be shipped. Carla Cargo, manufacturer of a three-wheel bike trailer, has sold nearly 300 units to Amazon in Manhattan, New York. Headquartered in Freiberg, Germany, its trailers are fabricated in Hungary and in a new robot-equipped factory in Germany. Over 100 Radkutsche trikes are being supplied by Dublin retailer Greenaer to An Post, the Irish postal service.

The first International Cargo Bike Festival was held in Nijmegen, the Netherlands, in 2012. By 2019, it had over 70 exhibitors. In 2011, the first of three linked EU funded cycle logistics projects orchestrated by Austrian consultancy FGM-AMOR commenced work. Today, the third project, CityChangerCargoBike, is half-way through its €4m budget, with cycle logistics expanding in partner cities all over Europe. In June 2019, the CCCB Project launched a set of four booklets promoting the use of cargo bikes in different settings found at cyclelogistics.eu/downloads/source-material.

The European Cycle Logistics Federation (ECLF) emerged in 2014, bringing together cycle logistics operators, suppliers and supporters. The 2017 ECLF Conference had 400 participants and 41 exhibitors, from 24 countries, over three days. The host, the City of Vienna, announced a cargo bike purchase subsidy scheme which was very successful in kick-starting the cargo bike market and subsequent use in the city. The event received significant support from deputy mayor Maria Vassilakou, the Green Party executive councillor responsible for Urban Planning, Traffic & Transport, Climate Protection, Energy and Public Participation.

Today the ECLF has spawned national cycle logistics associations in Belgium, Germany and the UK, whilst others are being set up. ECLF and Cycling Industries Europe have formed a strategic partnership to strengthen the impact and industrial coordination of the cargo bike sector. They have combined forces to create a stronger advocacy voice for cycle logistics businesses in EU and national government policies, ensuring representation in Brussels. In turn, this has lead to the establishment of a Cargo Bikes & Cycle Logistics Experts Group, to provide industry-wide leadership on growing the sector.

To keep tabs on what’s happening in the cargo bike market, both from a commercial and private sales perspective, keep tabs on CI.N’s new EV dedicated page that is tracking the growth of e-Cargo sales closely.