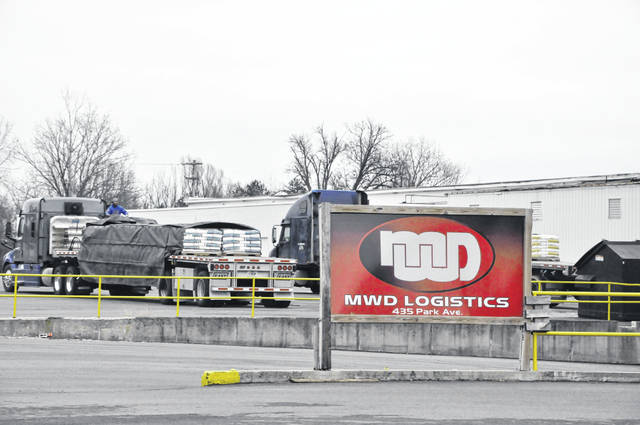 A fire broke out in a warehouse located at 435 Park Ave. in Delaware Monday.

The Delaware Fire Department responded to a sprinkler system alarm in the building at 4 a.m.

Delaware Fire Chief John Donahue said there was black smoke showing upon arrival, but the sprinkler system was “keeping (the fire) in check.”

Donahue added the problem crews ran into was the product that was being stored in the warehouse, which is owned by Milwaukee-based Phoenix Investors. He said the product was shredded coconut core, which is then dehydrated and formed into small blocks before eventually being used as a filler and to hold moisture in Scotts fertilizer products.

Because the product absorbs moisture, Donahue said the packages were being expanded and eventually ripping open due to the water from the sprinklers. He said nearly 750,o00 pounds of product had to be pulled out of the area where the fire had started to ensure they had extinguished all threats.

The crew utilized two Bobcats inside the building and a trackhoe on the exterior to move the product out and away from the building.

Due to the fire still smoldering inside, the building remained charged with smoke, which led to the fire department going through air bottles quickly. Scioto Township’s air unit was dispatched with the initial call, and Donahue said Elm Valley was later brought to the scene to provide more air after his unit had exhausted Scioto Township’s cascade system.

Donahue said the crews didn’t leave the scene until 1:30 a.m. Tuesday morning, a nearly 22-hour day for the crew.

A final total of the damages hasn’t been assessed yet, and a cause has not been determined either as the fire is still under investigation. No injuries were reported.