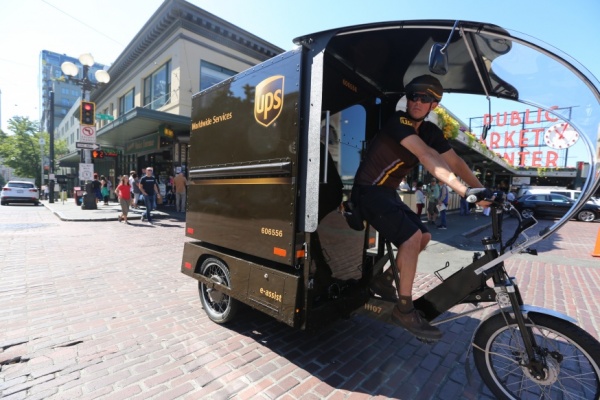 The Commercial Cargo Bike Program will bring an estimated 100 cargo bikes from major delivery companies, including UPS, DHL and Amazon, to the most crowded streets in midtown and downtown Manhattan, south of 60th.

It may expand further into the city depending on initial results, according to the Mayor’s Office.

The initiative will study whether cargo bicycles can successfully fit into the city’s streetscape, the mayor’s office said. Participating companies will send data to the DOT about the speed, parking, use of bike lanes and the size of the cargo bicycles. The DOT will then use the information to adjust its rules regarding cargo bike speed, parking rates and size.

Any freight company can participate in the program, but must follow the DOT’s rules including that the pedal-assist bikes cannot exceed speeds of 12 MPH and that cargo bike operators must attend safety training sessions.

“New Yorkers demand immediate results – whether that’s getting a package delivered or getting around the city,” Mayor Bill de Blasio said. “This is an exciting new program that will help cut congestion on our streets and speed up deliveries, all while reducing vehicle emissions.”

Many said with less trucks on the road, the program will make New York safer for cyclists and pedestrians as well.

“Cargo bikes will help shift freight deliveries away from large, dangerous, polluting trucks, and toward smaller, more appropriate vehicles for a dense urban environment,”said Danny Harris, executive director of Transportation Alternatives. “This means more space on our streets and sidewalks for people, and ultimately a better quality of life for all New Yorkers.”