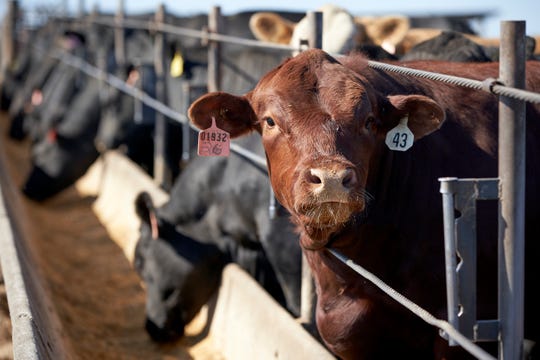 Cattle occupy a feedlot in Columbus, Neb. this summer. The overall supply of cattle on feed is up moderately over 2019, and the number of animals marketed throughout October is even with a year ago. (Photo: Nati Harnik, AP)

USDA’s latest Cattle on Feed report, released November 20, shows the number of animals on feed as of November 1 is higher than it was this time last year. The report provides monthly estimates of the number of cattle being fed for slaughter. For the report, USDA surveys feedlots of 1,000 head or more, as this represents 85% of all fed cattle. Cattle feeders provide data on inventory, placements, marketings and other disappearance.

This report showed a total inventory of 11.973 million head for the United States on November 1, up from 2019 and from last month. This 1.3% year-over-year increase is slightly below analysts’ expectations of an average increase of 1.8% in feedlot inventories, but still within the expected range. 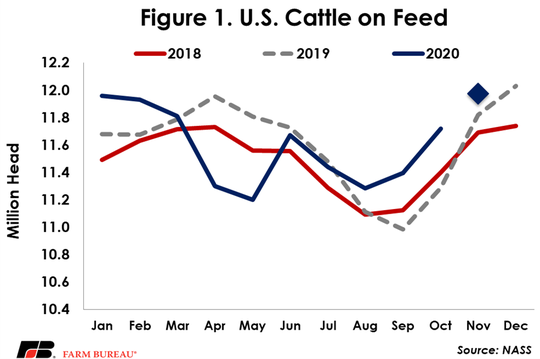 After strong impacts from the pandemic in April and May, the number of cattle on feed has largely followed seasonal patterns, but since August has been running above recent years’ levels. (Photo: NASS)

Large monthly carryover inventories helped to offset the drop in placements and pushed cattle on feed up 157,000 head over last year, making this the highest November inventory since the series began in 1996. Typically, November continues the fall buildup of animals after September lows, and it looks as if we are seeing this seasonality play out.  After strong impacts from the pandemic in April and May, the number of cattle on feed has largely followed seasonal patterns, but since August has been running above recent years’ levels.

As usual, Texas, Kansas and Nebraska led the way in total fed cattle numbers, accounting for over 7.8 million head, or approximately 65% of the total on-feed inventory in the country. Texas continued to gain year-over-year, adding 1% relative to 2019. Kansas and Nebraska saw moderately greater gains, adding 4% and 2%, respectively. 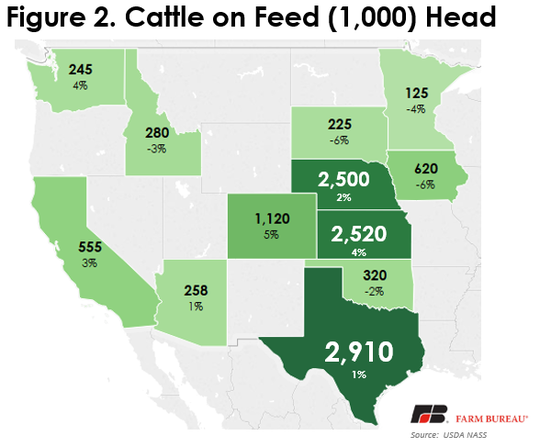 As usual, Texas, Kansas and Nebraska led the way in total fed cattle numbers, accounting for over 7.8 million head, or approximately 65% of the total on-feed inventory in the country. (Photo: USDA NASS)

While total inventories are an important component of the report, other key factors include placements (new animals being placed on feed) and marketings (animals being taken off feed and sold for slaughter). Coming in at 11% under 2019, placements in October fell below the average analyst expectation of an 8.9% decrease. The placement number was at the lower end of the range of expectations, coming in slightly above the minimum forecast of a 12.7% decrease. The relatively wide range of forecasts for placements – approximately 8% – highlights the uncertainty that can exist in forecasting this specific variable, with normal indicators such as feeder cattle imports from Mexico and auction volumes sending mixed signals.

A large driver of this pullback in placements is the fact that October 2019 placements were the highest in nearly a decade. Placements have been running ahead of year-ago levels since they recovered after declines in April and May at the height of the pandemic. In October, historically the peak month for placements, placements clocked in at 2.192 million head, bucking normal trends and coming in below September’s placements of 2.227 million head.

Marketings came in at 0.1% below last year. This is slightly below analysts’ expectations of 0.2% above year-ago levels, but well within the expected range and not a surprise. The 1.873 million head that were marketed in October is roughly even with 2019 levels even though October 2020 had one less slaughter day for the month.

This November Cattle on Feed report is considered relatively neutral to bullish. While an 11% decline in placements is bullish for future supplies of fed cattle, this was widely expected by the industry.  The overall supply of cattle on feed is up moderately over 2019, and the number of animals marketed throughout October is even with a year ago.

Looking forward, the big question mark on future reports is the level of resurgence in COVID-19 cases throughout the winter. The packing industry should have gotten better at managing this challenge after the crash course in the spring, but whether or not plants have to be closed is still a risk, albeit hopefully a lower one.

Michael Nepveux is an economist with American Farm Bureau Federation

Out of syllabus paper: 250 BBA students stare at bleak future as KU drags its feet over re-exam