The South African Logistics sector has just completed its strongest ever quarter of growth to date. As often happens the biggest decline was followed by the highest growth. With September being the end of the third quarter, Statistics SA is expected to release the updated GDP figures imminently and all indications are that it will show the strongest growth per quarter in our lifetime.

In June 2020, the Ctrack Freight Transport Index showed that the logistics sector recorded a decline of 17,6% compared to the previous quarter while the growth over the second quarter has improved with 11,8%. According to the Ctrack Freight Transport Index only two subsectors recorded a decline. Those were Pipelines, which is the smallest subsector and Storage, which is historically very difficult to predict.

“The Ctrack Freight Transport Index has been recording these trends for a considerable period of time and we have never seen such growth and recovery, which is excellent news for the economy,“ comments Hein Jordt, Managing Director of Ctrack SA.

Freight transport tracks the economy in the near real time, and this tell us that the 3rd quarter GDP will be the highest on record too. The Ctrack Freight Transport Index has a very close relationship with GDP and is also strongly correlated to the co-incident index. This is of course why we now expect the strongest GDP on record for South Africa and many other countries too.

While this recovery might seem remarkable, one must remember that if your turnover is cut by 50% from R1000 to R500 in one year and you get a 50% increase on the R500 turnover the next (year two), your turnover is now only R750, which is still 25% less than in year one.

However, this does not take away from the strength of the bounce or the record-breaking nature of the recovery, but it does indicate that everything is not back to normal yet. With normal meaning the logistics sector returning to where it was before the slowdown in mid-2019.

The effects of the second wave of Covid-19 are yet to be seen, however at the moment it seems to have hit Europe the hardest. China has recovered and is growing strongly while indications are that the recession in the US was not as bad as feared.

“We do expect some negative effects, but believe that they will not be as devastating as those of the first wave,” said Jordt.

Internal sectors are faring better than those with a bigger foreign trade factor.

The Ctrack Freight Transport Index covers six sub-sectors in the logistics arena. They all behave differently particularly during a world-wide crisis such as the current Covid-19 pandemic.

Airfreight had the strongest quarterly recovery, this is mainly due to the fact that it was the hardest hit during the Covid-19 lockdown period. The 22,5% improvement quarter on quarter is significant but still leaves Air freight transport down 33,9% compared to the same quarter last year.

No other sector was as severely impacted during lockdown and IATA, the international commercial aviation body, only expects the sector to recover to where it was in 2019 by 2022 or 2023. However, the latest reports from IATA suggest that African Air freight in total may have eked out some growth with a 1% improvement compared to a year ago.

Sea freight grew 13,2% quarter on quarter, but is still 6,1% behind the same quarter in 2019. Sea freight is coming back stronger than expected and improved by 12% in September compared to August.

There are however some disruptions in Sea freight expected with Northern Europe going into another lockdown which is causing delays in the supply chain. This will need to be monitored very carefully as waves of busy periods could be followed by relatively slow periods. The disruption is certainly not over and this sector, while less impacted than Air freight, remains volatile. 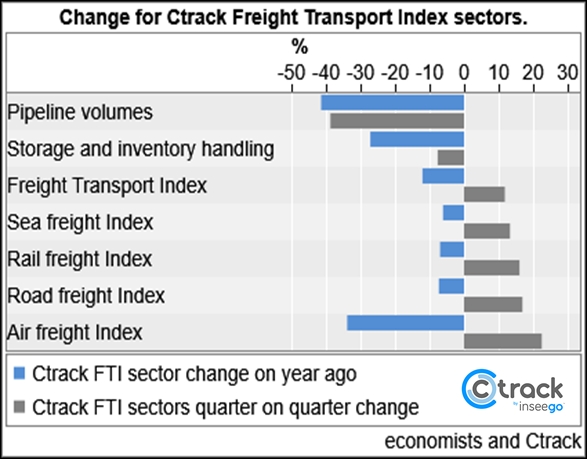 Rail and Road recorded similar increases of 16% and 16,8% compared to the previous quarter. While both major forms of land transport report disruptions, such as border delays and illegal strike action they are both only 7% behind the same quarter last year. A complete recovery is only expected in a years’ time.

The recovery in the road transport sector may be due to the move towards courier type transport, however long-distance freight transport was at a similar level in September as it was in September 2019. That being said September 2019 featured plenty of strike action and was also a weak economic quarter for the overall South African economy.

Pipelines reported the biggest decline at 38,7% quarter on quarter. This is due to the storing of massive amounts of fuel during the 2nd quarter and it may be another month or two before we see quarterly increases again. With many motorists still not driving due to widespread work from home policies, fuel usage remains below par (apart from diesel for trucking which is close to normal). 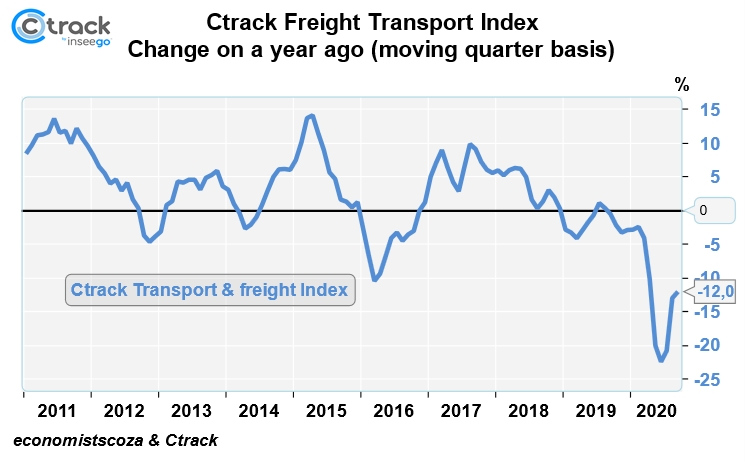 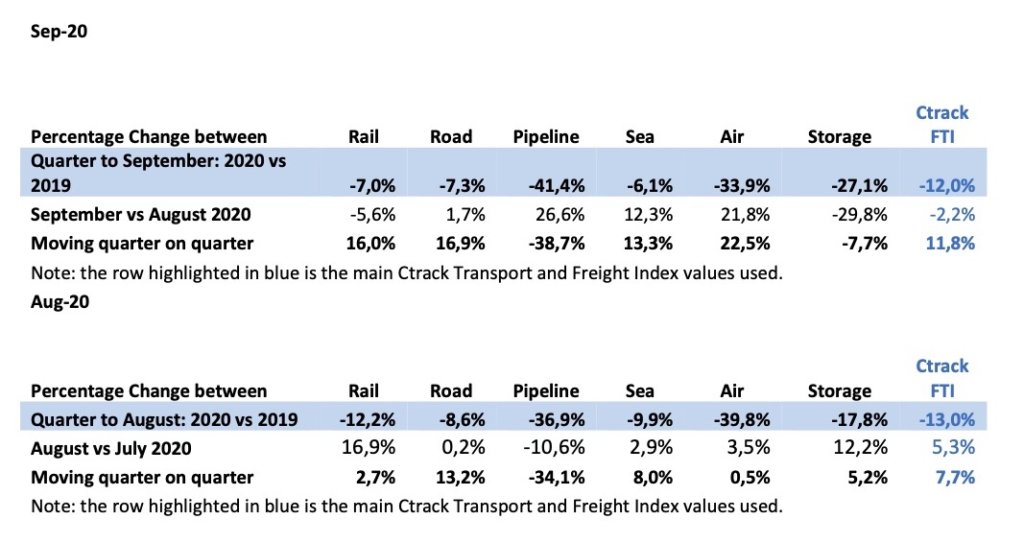 “South Africa is on the verge of climbing on the economic recovery train with companies keen to recover losses and restore their turnover figures. However, if business and the public do not continue to adhere to the basic hygiene and protection guidelines, we could be back into lockdown before we know it. Companies that barely survived the first lockdown will be sent off a cliff in a second round and the economic consequences will be significantly more severe if this does happen,” comments Hein Jordt, Managing Director of Ctrack SA.