Why the Q1 SolutionMap rankings of procurement software firms matter

Nearly two years ago, the Spend Matters team birthed the inaugural set of SolutionMap rankings unto the world.

This week, the latest quarterly update was released, showing how procurement software providers stack up against one another. So this is a good time to explore how SolutionMap came into being and explain how it works.

“Shakespeare once wrote that ‘talkers are no good doers,’ ” said Jason Busch, founder of Spend Matters, in a recent interview retrospective. “Believe me, we were talkers for too long. Everyone inside Spend Matters had an opinion about existing analyst comparative frameworks and reports. For years, we talked about how we could do it better. And you guessed it — nothing got done. Remind me never to be a talker again!”

In the end, it certainly took a village.

“Finally,” Busch continued, “after much brainstorming (I also credit the original thinking to Xavier Olivera, lead analyst, and Pierre Mitchell, chief research officer), we decided to push forward with an objective vendor ranking model built on ‘personas’ vs. a single view of the data we would collect. I think Pierre came up with fully segmenting analyst ratings from customer ratings, a hallmark of SolutionMap.”

The team decided the first three SolutionMap categories to tackle should comprise an end-to-end view of the P2P area (e-procurement, invoice-to-pay, procure-to-pay). We’re now up to 12 categories, including end-to-end suite views and contingent workforce/services, with more on the horizon.

Analyst Ratings + Customer Ratings + Persona Views = How do the rankings pan out?

Before we get to what happened in the procurement software market in Q1 2019, in addition to what’s new in the Q1 SolutionMap release, let’s address a pertinent question:

Have you taken a spin through the Q1 SolutionMap rankings yet? If not, watch this video on how to easily do that:

Secondly, Jaggaer announced the release of Jaggaer ONE, also in February 2019, which unifies three of its product lines — Jaggaer Indirect, Jaggaer Direct and Jaggaer Advantage — without moving them onto a single code base, allowing customers and prospects to select the best modules from each offering to fit an organization’s unique needs.

However, the Spend Matters analyst team has already embarked on a holistic refresh of all participating providers for the Q2 2019 SolutionMap release — due out this summer — taking an even more granular and exhaustive approach of evaluating vendor capabilities.

Which Q1 2019 SolutionMap providers are the best performers?

For now, let’s shine a spotlight on a few notable Value Leaders within the Q1 SolutionMap.

Spend Matters defines “Value Leader” as those providers appearing in the upper-right quadrant of each persona-based ranking graphic — otherwise defined as those providers achieving both a high analyst score of their solution and a high customer score. (Providers scoring highly in just analyst ratings or just customer ratings are ranked as “Solution Leaders” and “Customer Leaders,” respectively.)

In terms of the suite providers, the usual suspects that play across the entire source-to-pay (S2P) spectrum still scored strongly in multiple categories (with only minor changes in customer scoring compared to Q4 2018, in certain cases) — Coupa, SAP Ariba and Ivalua held on to their status as the heavies to be reckoned with.

In the pool of P2P suite providers, Vroozi managed to achieve Value Leader status (in at least one persona) in all three constituent SolutionMap categories: E-Procurement, Invoice-to-Pay and Procure-to-Pay. Basware and BirchStreet are two other P2P suite providers that generally ranked well in Q1.

Note: Within a single solution category (e.g. Spend Analytics), a provider may rank as a Value Leader in one persona but not in another, based on persona weightings and other factors.

To see all of the above in visual format by persona, view the free rankings here.

How to get the Insider view on rankings 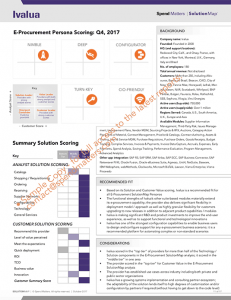 On a self-service basis, anyone can sign up for our new SolutionMap Insider subscription. This includes members-only access to Provider Scoring Summary reports and to ratings of all participating procurement software companies.

In addition to these reports, the subscription also features:

Learn more here, including how to contact us for more info, such as pricing. (Discounts are available for multiple subscription areas.)