or the first time in its 12-year history, Modern’s annual salary survey of our readers shows signs of restlessness among materials handling professionals. Many of the usual satisfaction metrics remain as strong as ever, and compensation continues to track upward in line with company performance. Ninety-two percent of industry professionals said they would recommend the career to others. But one number stood out as the lowest ever for our survey. The answer to the simple question: “Do you like your current job?” has fallen 7% to 85%.

Based on survey results, it’s possible the same factors that reinforce satisfaction might also contribute to the desire to find greener grass, technology, innovation and opportunities for challenges.

Last year, 41% of respondents indicated no interest in seeking another job, tying the record-high set in 2012. Now, 35% said they are happy where they are. Down from 39% last year, 27% said they are “always open to other possibilities.” And, 38% of respondents are now passively or actively looking for work elsewhere, up from 20% last year. Those looking to move are motivated primarily by compensation (53%), the desire for new challenges (37%) and a lack of advancement opportunities (33%).

Levels of stress seem to have little to do with satisfaction. Last year, nearly half reported their jobs are very (38%) or extremely (9%) stressful. These figures now stand at 29% and 10% respectively, while 48% say work is somewhat stressful, 10% not very and 3% not at all. Respondents are asked to compare current stress levels to those of two years ago, and the results have changed little in the last four surveys. In 2019, respondents reported more stress (44%), less stress (16%) and the same (40%). 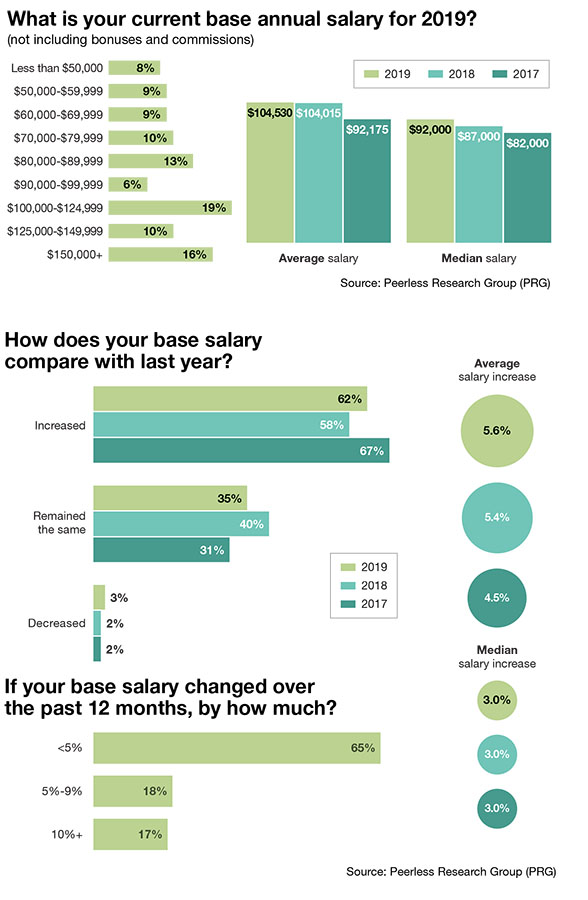 After consecutive years of decline, the frequency of dramatic cost-saving measures saw a slight uptick this year, with 25% reporting reduced overtime and 23% enacting a hiring freeze. Layoffs held steady at 19%, while reduced benefits has fallen to 18%. In 2019, 7% of respondents were personally affected by layoffs, level with 2018.

As reported by respondents, the average turnover rate within their own departments continues to creep upward, from 8.2% in 2017 to 10.2%. Five years ago, the figure hovered between 6% and 7%, and one third (33%) of respondents reported zero turnover. This year only 23% reported no turnover.

For all the innovation and upheaval in the industry, appreciation remains abundant for the job’s challenging and rewarding nature.

Why would you recommend the materials handling profession to others? (92%)

Why would you not recommend the materials handling profession to others? (8%) 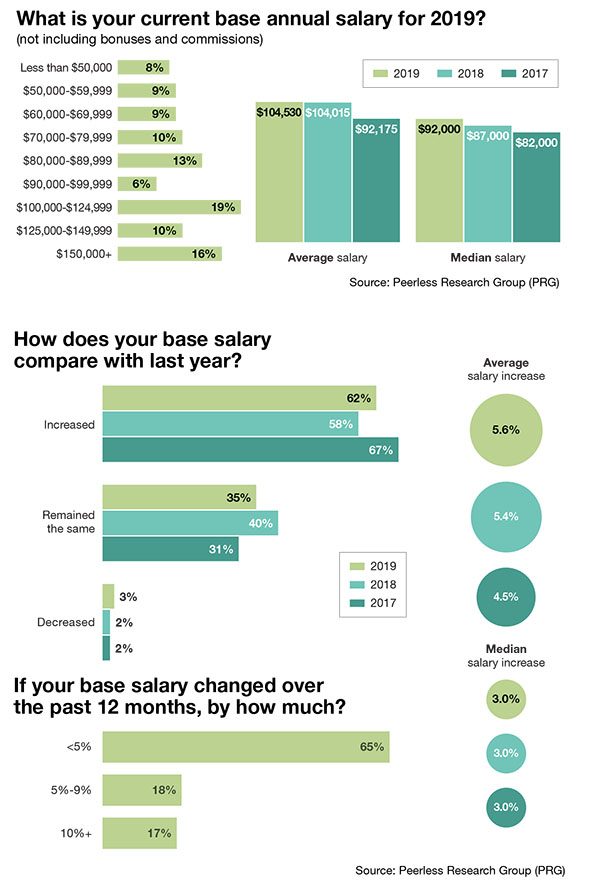 Average base salaries had dipped by several thousand before breaking into six digits at $104,015 in 2018. This year, the average stayed about level. Of the 62% of respondents who said their salary had increased in the previous 12 months, two-thirds saw increases of less than 5%, about one in five reported salaries increased between 5% and 9%, and 17% saw paychecks go up by 10% or more. The average base salary increase was 5.6%. And, 3% reported their salaries had decreased.

In 2019, three quarters of respondents expect to receive a bonus averaging $20,820. This is down from four years of hovering around $25,000. However, the median is up to $12,000, reflecting more small and medium bonuses.

More than two-thirds of bonuses are granted based on the company reaching its performance goals, a percentage that had trended slightly downward in recent years before spiking to 2014 levels. Previously on a multi-year upward trend, bonuses granted for lowering operational costs dipped to 23% in 2018 before jumping up five points. 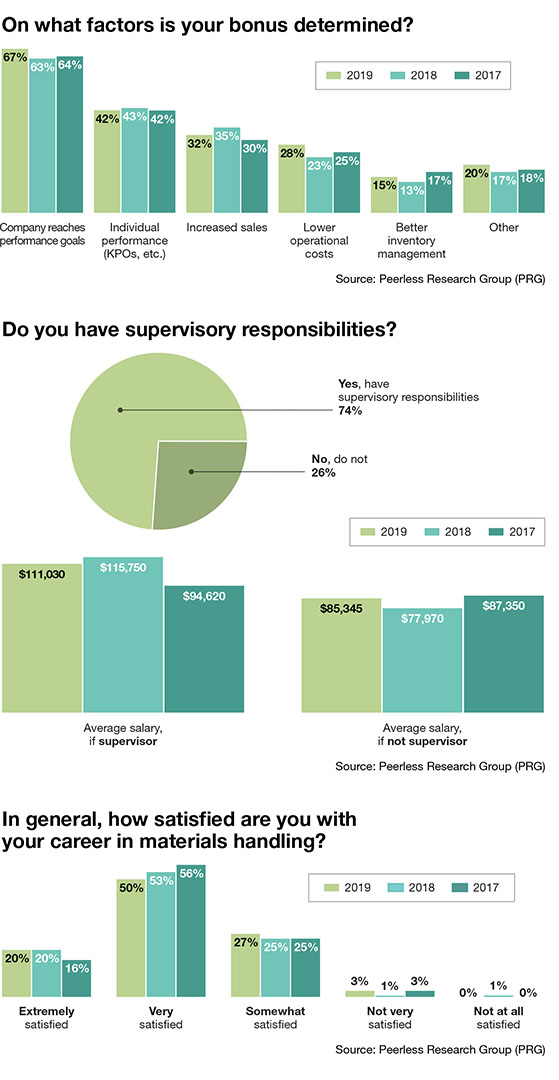 The 13% of respondents in company management (CEO, VP, GM, etc.) earned an average of $161,400. The engineers who make up 17% of the survey base have seen average salaries post small but steady gains, but this group earned $103,170, up $8,000. Last year, salaries for the warehouse, distribution and logistics supervisors who make up 35% of respondents recovered from the lowest average since 2011. This year, the cohort earns $93,980, down slightly from last year’s near-record mark.

Those with supervisory responsibilities (74%) expect to earn an average of $111,030, which is 30% more than their non-supervisor colleagues’ $85,345. That gap—which has varied from 8% to 25% in recent years—has closed significantly since last year’s aberrant 48% spread.

Respondents, by the numbers

In July/August of 2019, Modern Materials Handling subscribers received an invitation by e-mail to participate in the 12th Annual Salary Survey. The e-mail included a dedicated URL linked to a Website that hosted the questionnaire. The study, performed by Peerless Research Group, received a total of 348 responses from qualified materials handling professionals. 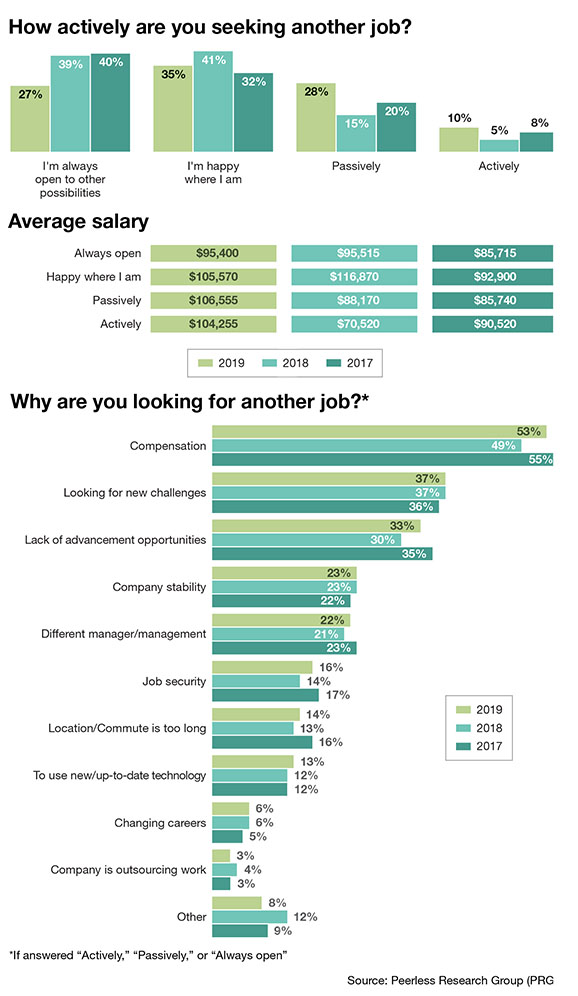 Of the 65% of respondents with budgetary responsibilities, the average oversees a budget of $208,700. This is based on the approximate spend level before respondents require management approval. About 14% have approval authority for at least $1 million, 72% manage less than $100,000, and 39% have authority over $10,000 or less. Average revenues tell a similar story, up 12% to $721 million (median: $169 million). The average company employs 2,508 people. 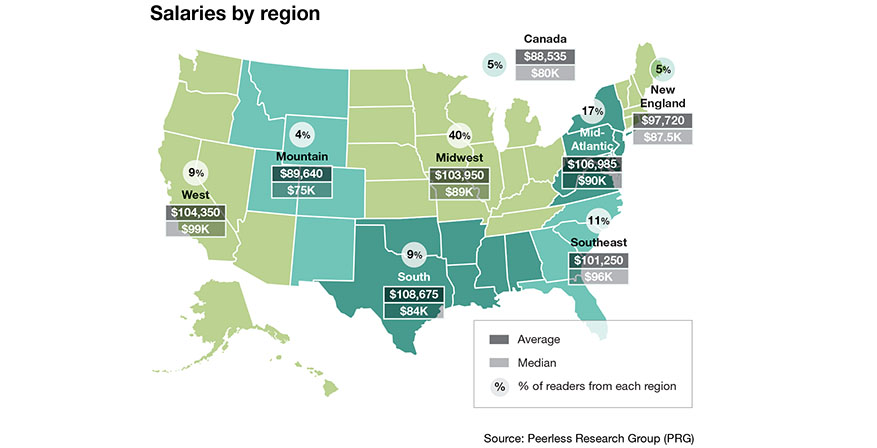