The pandemic may have nearly decimated passenger airlines, but air cargo carriers have been reeling in the business. Considering all the PPE supplies, as well as e-commerce and products resulting from increasing global production taking to the skies, demand for air cargo services has reached record highs.

Air cargo carriers have also been racking up impressive revenues. For 2020, IATA estimates revenues hit at a near-record $117.7 billion, up from $102.4 billion in 2019. By comparison, passenger service lost more than $84 billion. 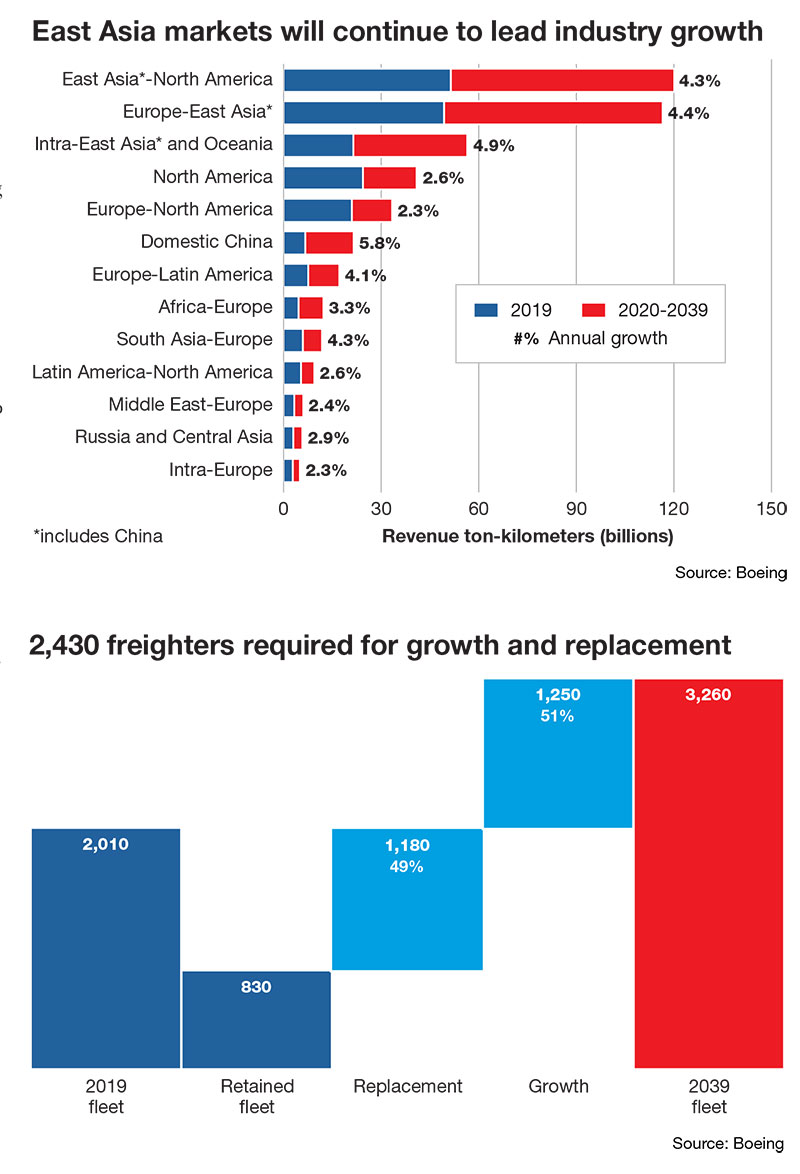 Lufthansa Cargo, for example, achieved the best result in its 26-year history, with revenues rising by 11% to nearly $3.37 billion with adjusted earnings before interest and taxes of nearly $941 million. By sharp comparison, the previous year it was nearly $1.22 million. For 2020, the passenger side saw revenues of $15.52 billion, a 61.95% decline year-over-year.

But more importantly, Lufthansa saw a 45% fall in overall capacity, driven largely by the precipitous fall in passenger demand which took out critical belly capacity for cargo (-24%), pushing yields up by 30% in 2020. Pre-pandemic, passenger flights carried about 60% of global airfreight. Case in point, Lufthansa Cargo’s average load factor may have improved by 7.8 percentage points to 69.1%, but its cargo capacity shrank by 36%.

Without pulling any punches, all of these facts spell bad news for shippers. “When passenger flights were suddenly taken away, cargo planes and charters seemed to play the role of a band-aid or temporary fix for shippers in a pinch,” says Matt Castle, vice president of global airfreight at C.H. Robinson.

High demand for cargo space created capacity constraints and consequential high rates. And while it appears the height of the pandemic crisis is over, Castle warns that shippers most likely won’t see relief from elevated rates until demand and available capacity level out.

“I’ve been in the business for more than two decades, and I can’t remember when rates have stayed elevated and capacity remained tight for so long,” adds Castel.

CLIVE data reveals that load factors continue to strain international air cargo, particularly since the traditional surge in summer capacity has so far failed to materialize. Analysts at the firm report that available May 2021 capacity was down -21% compared to May 2019, indicating the gap in airline capacity is widening compared to its -18% figure in April and -14% for March.

Based on the volume and weight perspectives of cargo flown and capacity available, CLIVE determined that the industry’s “dynamic loadfactor” for April 2021 was 71%––or 10% points higher than in 2019 and 4% points above a year ago.

“A dynamic loadfactor of 71% represents a tremendous strain on the air cargo system,” says Niall van de Wouw, CLIVE’s managing director. He reports that May 2021 data versus May 2020 show +41% growth in chargeable weight, a +42% rise in available capacity, and +1% point increase in dynamic loadfactor.

“Capacity is growing, but not quite at the rate we were expecting initially as passenger travel has been a bit slower to return,” says Maulin Vakil, managing director of customer care and performance at American Airlines (AA) Cargo. “That said, cargo performance will likely remain strong for a while as demand remains steady.”

Consequently, AACargo has been expanding its network substantially. “In June, we expect to operate more than 5,700 wide-body flights, which is great for cargo capacity,” says Vakil. “The majority of these flights are passenger flights, which is positive to see.”

Vakil adds that AACargo will continue to operate cargo-only flights based on customer demand and in certain markets where passenger service is not yet scheduled.

An Emirates passenger freighter is loaded with cargo. Photo courtesy of Emirates SkyCargo.

To create capacity, some carriers continue to use the expensive alternative of dedicated freighters as well as retrofitting upper belly space on passenger aircraft to haul cargo, creating new entities called “preighters.”

Emirates SkyCargo is one example. It was among one of the first carriers in the world to make up for the shortfall by introducing cargo-only flights on its passenger aircraft. This included loading cargo on the seats of passenger aircraft and in the overhead bins.

“We used the wide-body capacity of our B777-300ER passenger aircraft to provide much needed capacity for the movement of essential goods,” says Hiran Perera, senior vice president of cargo planning and freighters at Emirates SkyCargo. Consequently, within 100 days from the end of March 2020, when Emirates had suspended all passenger operations, Emirates SkyCargo had re-established a network of more than 100 destinations across six continents.

“In June 2020, we also removed seats in economy class from 10 B777-300ER aircraft to convert them into what we call mini-freighters,” says Perera. “To keep up with demand, we added six more mini-freighters into the cargo fleet. With this, we were able to rapidly scale up our cargo network.” Within a year, the carrier had operated more than 27,800 cargo-only flights, which he says is more than any other carrier globally.

With vaccination rates in most developed countries expected to exceed 50% by the third quarter and passenger numbers expected to recover to 52% of pre-pandemic levels, according to the IATA, more passenger aircraft should be flying and adding cargo capacity through the end of the year. Meanwhile, however, capacity remains in short supply on many lanes.

“The majority of passenger demand is domestic, so cargo planes and charters are still driving international routes,” emphasizes Castle. “Until there is greater demand for international passenger travel, it’s likely the passenger capacity that does comes back will remain in traditional hubs such as Dallas for American, Chicago for United, and Atlanta for Delta.”

Jason Berry, vice president of cargo at Air Canada, says the carriers is doing its best to place capacity where needed by utilizing its wide-body fleet of B777s, B787s and A330s. In addition to the passenger freighters Air Canada has deployed, the carrier operates upper deck/cabin load 777s and A330s. “These aircraft have played a key role in preserving the global supply chain throughout the pandemic and remain an integral part of our ability to keep critical goods moving,” he says.

With capacity remaining very volatile, trade lanes have their own challenges. Those with the most robust cargo growth also have the highest pricing. For example, the Baltic Air Freight Indices (BAI) increased by almost 17% in April over March largely driven by China (Hong Kong and Shanghai Pudong) with growth around 30%. Rates on the China-U.S. route increased 8% in April 2021 over April 2020, and 153% over April 2019.

“The BAI increased by 3% in May over April, but this is a marked slowdown on the 17% growth seen in April over March,” notes Gareth Sinclair of TAC Index. “Pricing strength continues to be seen out of China and Hong Kong to the U.S. and Europe and from Europe to the U.S., with all three trade lanes seeing price increases in May over April.”

“On the trans-Pacific, capacity has actually maintained or slightly increased, but at high rates, which is what is attracting the capacity,” adds C.H. Robinson’s Castle.

Berry concurs. “And rising fuel prices and varying levels of COVID-19 mitigation strategies have made it increasingly difficult to balance demand with capacity,” he says.

Meanwhile, Vakil reports that AACargo is operating its largest wide-body network since the pandemic’s start. “This includes growth in both domestic and international networks,” he says. “Our international lanes do very well, especially our trans-Atlantic lanes. In fact, by operating cargo only flights, we’ve effectively facilitated the return of full service, such as including passengers to markets like Paris–Dallas, Rome–Dallas, Milan–Philadelphia, Madrid–Philadelphia and Barcelona–New York.”

Vakil notes how airfreight options across several regions around the world remain very constrained. “This is where partnerships, trucking lanes and close communication with customers comes into play to meet as many needs as possible,” he says. 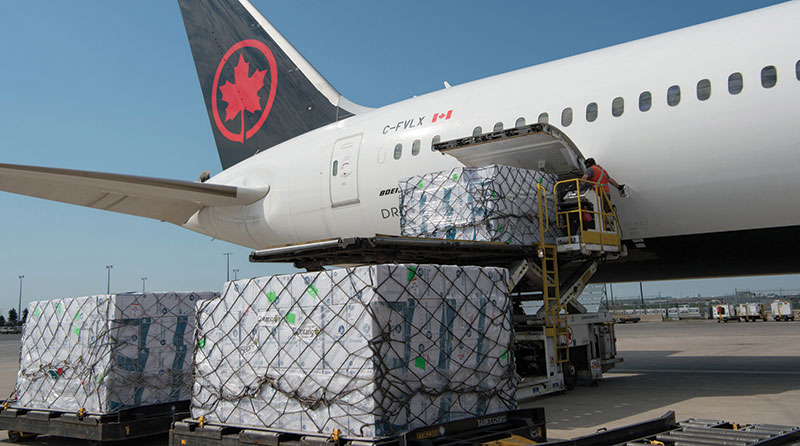 Cargo is loaded on an Air Canada aircraft. Photo courtesy of Air Canada.

The lessons learned from the pandemic are many, but a big one is how to offer a quick response.

“Early in the pandemic, critical pharmaceuticals, PPE and medical equipment didn’t have the luxury of several months it would take on other modes,” Vakil says. “In my view, shippers, forwarders and airlines are now increasingly planning proactively to avoid disruption of critical transport solutions.”

In April, for example, Cathay Pacific Cargo performed its third IATA ONE Record initiative pilot, this one at its home hub in Hong Kong. ONE Record is a standard for data sharing and creates a single record view of the shipment. The standard defines a common data model for the data that is shared via standardized and secured web API. The program builds on paperless operations of the electronic air waybill.

Meanwhile, competition is increasing. Amazon Air continues to add aircraft and gateways—the most recent being Kansas City International Airport. Ocean carriers are also jumping into the business. CMA CGM recently added an air cargo division and extended its fledgling network beyond the U.S. with destinations Dubai, Beirut, and Istanbul.

In the meantime, carriers continue to add or upgrade their fleets. Boeing, which supplies nearly 90% of the world’s freighter fleet, is seeing strong demand for dedicated freighters including new production and converted freighters. “This intensified during the pandemic,” says Boeing spokesperson Brianna Jackson.

Boeing forecasts the global freighter fleet—production and conversions—to grow more than 60% to 3,260 over the next two decades, with 2,430 freighters deliveries. Of those deliveries, roughly half will replace retiring airplanes and half will expand the fleet to meet projected traffic growth.