News out of the global container shipping sector continues apace, as the industry continues a significant transformation in the face of low rates and profits and changing business strategies.

First, in more news in the story that seemingly never ends, the container shipping sector analysts at Alphaliner say that a swath of new fuel surcharges by carriers to collect offsetting revenues from shippers for new low sulfur fuel costs lack transparency and in some cases don’t make sense.


As SCDigest has reported many times, in 2018 the International Maritime Organization (IMO) passed rules requiring ocean freight carriers to significantly reduce sulfur emissions, either through using a new low sulfur diesel fuel versus the traditional bunker fuel, or by installing emissions “scrubbers.” The rules are set to go into effect on Jan. 1. `

However, the diesel fuel is about two times the cost of the current fuel, and the expensive scrubbers cost millions per ship.


Some experts in the sector have warned that if container carriers can’t pass on the new costs to shippers, some already financial weak firms could go bankrupt.

To address that, virtually every major container carrier has recently released a new fuel surcharge regime – but an examination of the surcharge documents by Alphaliner analysts found the new policies are very much lacking in transparency – meaning the basis for the new surcharge program is not clear.

“The wide variations in the new fuel surcharge and lack of complete transparency on their calculations is bound to fuel shipper concerns of overcharging by carriers to compensate for lower freight rates,” Alphaliner said in a research note.

Alphaliner added that it could not identify any real relationship between the level of surcharge announced by each carrier and the relative fuel efficiency they should have, based on the average size of vessels deployed. And the surcharges are generally at the TEU level, regardless of the ship used for any particular sailing, even though newer and larger ships are much more fuel efficient per TEU. 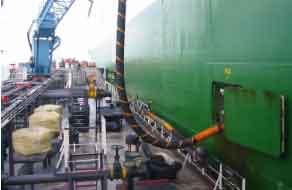 Of course, some can’t help but wonder if the fuel charges are being used to prop up revenues in the face of still very low rates.

The number of layoffs has not been fully determined, but reports are suggesting the total may be in the relatively modest 200 range, most at the company’s Danish headquarters.


More interesting perhaps is that fact that as part of the layoffs, Maersk is shuttering its dedicated sustainability team, with group leader Annette Stube leaving the company and the rest of the team moved back into other departments in the company.

Whether that means Maersk, generally considered an environmental leader in the shipping sector, has decided it needs to pare back its efforts or if it believes it has simply embedded sustainability into its operations and therefore does not require a separate group. SCDigest suspects the latter.

Meanwhile, in November Maersk took a major step in its quest to become a global true global logistics company by signing a 4PL deal with Swiss agrochemical conglomerate Syngenta. A 4PL is a logistics service provider that manages and coordinates the activities of other 3PL.

The deal an extension of the 4PL agreement Syngenta signed with Maersk’s logistics subsidiary, Damco, in 2016.

Do you think new ocean fuel surcharges need more trasparency?  Are carriers using to shore up the bottom line? Let us know your thoughts at the Feedback section below.

US Ecology (NASDAQ:ECOL) Downgraded by BidaskClub to “Strong Sell”

The global market for Hydrogel is projected to reach US$15.3 billion by 2025