Mustafa Salahuddin is the president and business agent of the Amalgamated Transit Union Local 1316 in Bridgeport, Connecticut. In this edited interview with Labor Network for Sustainability, he tells how the local became part of the company procurement process—leading the company to convert to climate-safe electric buses. Credits Taylor Mayes, Connecticut Roundtable on Climate and Jobs.

December 20, 2019 by Labor Network for Sustainability Leave a Comment 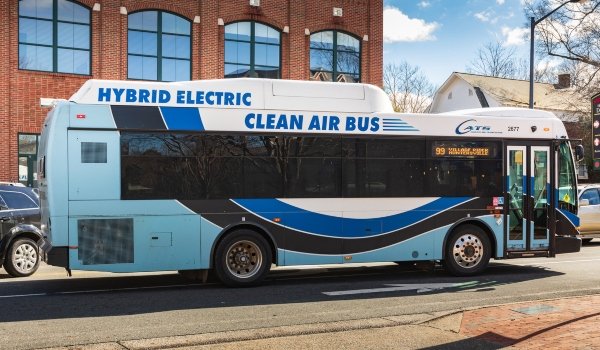 —
I had just become president in 2014. We started a campaign about the working stations. And then it occurred to me, the next time I talk to the Chief Operating Officer of the company I’m going to ask him if there is any way that someone from the union itself could be part of the procurements? He said, what kind of relationship would that be? I said, I can send you some information on what the drivers are looking for in terms of their working stations and what we believe will be essential to the needs of us being able to navigate around the city in a comfortable and safe way. So he said, OK, what are some of the ideas? I said, some drivers are talking about the monitors being in the wrong place. There are some drivers complaining about the way the seatbelt is cutting their neck, and maybe there should be something adjustable so you can change to different weights and sizes. And then there are the blind spots. What better person is there to tell you about that than the person who is actually operating the bus?

We talked about these different issues. The blind spot became a very much smaller blindspot. They put indicators on the bus—nice loudspeakers – to let the public know, bus is turning left, bus is turning right. It’s a warning—it’s loud! The CEO said, this is great! We’ve never thought of getting the union involved.

I told him, we’re both young. You should want to leave a legacy that you had something to do with renewable energy. You’re a young man. It is something to be proud of later on. Your kids can look back on it and say, my dad had something to do with that. I told him climate change, fossil fuels — it’s a no-brainer. That diesel with that air that’s going through the bus – the drivers and passengers are breathing unhealthy and detrimental air. Sit with the drivers and you’ll see. This will stop people from getting sick so much. He said, you’re absolutely right.

So he purchased about four or five hybrids. Then they ordered five to seven fully electric ones. Now he wants to go fully electric. His goal is to try to do it before the projected year of 2030.

This is a work in progress, but it is work worth engaging in. I’m looking to the unveiling of our first fully electric buses. I’m really looking forward to that.

This post was previously published on labor4sustainability.org and is republished here with permission from the author.

If you believe in the work we are doing here at The Good Men Project and want to join our calls on a regular basis, please join us as a Premium Member, today.

All Premium Members get to view The Good Men Project with NO ADS.

Need more info? A complete list of benefits is here.