For 2-ethylhexanol (2-EH), the market was hit
by year-end inflows of deep-sea cargoes. It
remains to be seen if those cargoes will
continue to make their way to Asia.

There are recent signs that rebalancing efforts
in Asia – via output cuts and plant turnarounds
– have resulted in prices bottoming out, but
weak demand could still unhinge those efforts.

Spot 2-EH prices on 6 December averaged at
$830/tonne CFR (cost and freight) east Asia,
down $5/tonne from the week before, according
to ICIS data. 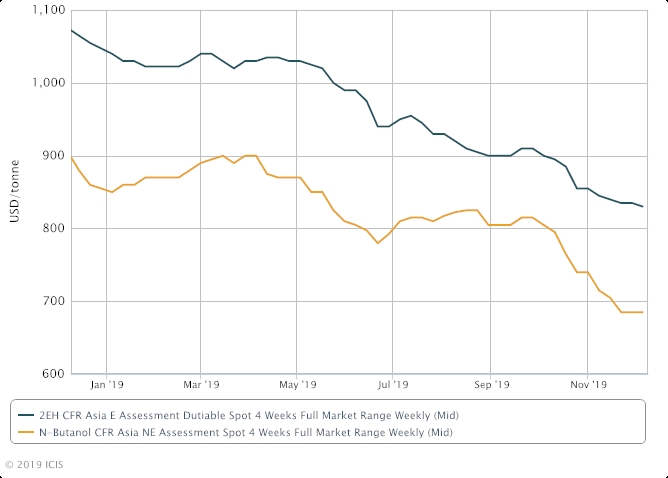 The n-butanol (NBA) market was similarly hit by
the influx of deep-sea cargoes, while demand
from downstream markets is not expected to
improve anytime soon.

A producer in northeast Asia is conducting
turnaround at its plant, while a separate
producer in southeast Asia has been clearing
out its inventories.

Asian NBA producers are generally not in a
hurry to make offers, opening the door for some
deep-sea cargoes to penetrate the market.