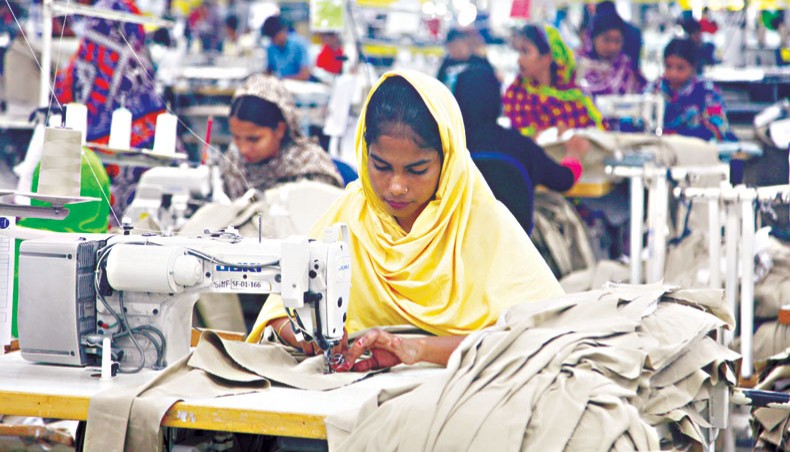 A file shows workers sewing clothes at a readymade garment factory on the outskirts of Dhaka. The Bangladesh Garment Manufacturers and Exporters Association has requested the National Board of Revenue to allow garment exporters to sell duty-free a portion of their export products to global brands’ outlets in Bangladesh. — New Age photo

The Bangladesh Garment Manufacturers and Exporters Association has requested the National Board of Revenue to allow garment exporters to sell duty-free a portion of their export products to global brands’ outlets in Bangladesh.

Local clothing brands have opposed the BGMEA proposal saying that such a move would hurt their businesses because of uneven competition.

BGMEA president Rubana Huq in a letter to the NBR chairman on January 11 said that many renowned global brands expressed interest in establishing outlets in Bangladesh but held back the plans due to ‘lack of timebefitting policy support’ in the country.

‘The country is losing foreign investment and local consumers are being deprived of the ability to buy global brands’ products at reasonable prices due to lack of time-befitting policy,’ Rubana said in the letter.

According to a statutory order issued by the NBR in June 1996, the 100-per cent export-oriented industries are allowed to sell products equal in volume to 20 per cent of their total exports of the previous year to the local market by paying the applicable duty.

‘But many of the foreign brands are keen to procure the 20-per cent  products duty free for their  outlets in Bangladesh,’ Rubana said.

She requested the NBR to formulate a policy to facilitate selling of the 20per cent products duty free and to consider the sale as export.

Citing duty-free facilities in some South Asian countries, including India, the BGMEA president said that the facility would encourage global brands to set up outlets in Bangladesh that would lead to increased investment and employment.

The brand now manufactures products at garment factories in Bangladesh and exports them to its warehouse in India and re-imports them to be sold at its Bangladesh outlet.

The brand said that it had to pay 130 per cent  custom duties for importing many of the garments and shoes, even for ones made in Bangladesh, to sell at its outlet.

Decathlon, which started its retail operations in Bangladesh in July 2019, said that one of its footwear suppliers and one of the tent suppliers, both located at the export processing zone in Chattogram, had received permission from the Bangladesh Export Processing Zones Authority to sell products amounting to 10 per cent of their previous year’s exports to the local market.

If the duty-free facilities were given to the factories to sell the products locally, the prices of Decathlon items would be reduced by around 50 per cent and would be accessible to more Bangladeshi consumers.

A number of foreign brands, including Puma, Lotto and Le Cooper, have opened outlets in Bangladesh.

Anwar-ul Alam Chowdhury Parvez, chairman of Evince Group, one of the leading garment exporters in the country, however, differed with the BGMEA initiative.

Parvez, who has also established the local brand, Noir, said that if the global brands in Bangladesh were given the opportunity to procure garments duty free, it would reduce the competitiveness of the local brands.

He said that if the prices of products at the outlets of global brands and local brands were the same, the local companies would be affected badly as they had to pay duty for import of raw materials.

Syed Azharul Haque Azad, president of the Fashion Entrepreneurs Association of Bangladesh, said that the BGMEA proposal would not be encouraging for the local brands.

As the local entrepreneurs are not getting bond facility for import of raw materials, they would disappear from the market, he said.