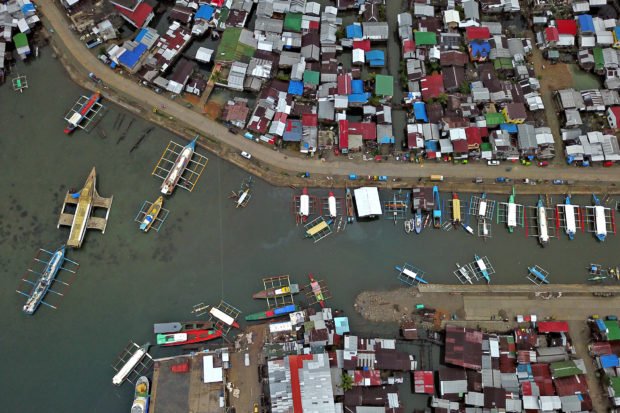 SURIGAO CITY – At least 31 cargo trucks, cars and other vehicles have been stranded at the Lipata ferry terminal here as of 12 pm Monday after the Philippine Coast Guard suspended all boat trips across Surigao strait due to Tropical Storm Ursula.

Commodore Lawrence Roque, PCG station commander in Surigao del Norte, said his office banned all sea travels across the strait as of 11 a.m., following an advisory from the Philippine Atmospheric, Geophysical and Astronomical Services Administration (Pagasa).

“Upon receiving the advisory, we immediately canceled all trips of passenger and cargo vessels at the port of Surigao City and Lipata ferry port. We have also suspended the trips to and from the provinces of Dinagat Islands and Surigao del Norte,” said Roque.

As of 2 p.m., the Philippine Ports Authority (PPA) recorded a total of 63 stranded passengers at the Surigao City port.

“The LGU’s of the island province of Dinagat and in Siargao Islands of Surigao del Norte should make the necessary precautionary measures to ensure the safety of their citizens,” said Liza Rosales Mazo, regional director of the Office of Civil Defense (OCD) in Caraga. “I would advise a pre-emptive evacuation especially among the coastal and small island communities,” she added.

Mazo warned local governments in areas placed under Pagasa’s storm signal no. 1 not to be complacent as the storm was expected to intensify in the run-up to its landfall.

“We are also looking into possible flooding and landslide not only among the island communities but also among those communities along the Northern Surigao corridor,” said Mazo.
Mazo explained that rainfall brought by the low-pressure area (LPA) across Caraga region could possibly soften the soil in landslide-prone areas and that the added rainfall from Ursula could trigger landslides and flash floods.

Ver Lancer D. Galanida, Pagasa’s chief meteorological officer in Caraga, said storm signal for Dinagat and Siargao Islands would be expected to rise from signal no. 1 to no. 2 as the storm moves closer by Christmas eve.

“We are looking at strong winds with heavy rainfall for Dinagat, Bukas Grande and Siargao islands by December 24. As for the rest of Caraga region, there will be light to moderate rainfall especially along Surigao del Norte,” said Galanida.

Don’t miss out on the latest news and information.