Kewal Kiran Clothing (KKCL) had reported 10 per cent revenue growth, a positive sign in revival of demand for branded apparel. Its leading ‘Killer’ jean brand saw sales rise 24.2 per cent from a year before; those of its other brand, Easies by Killer, grew 11.4 per cent.

“These two brands cumulatively contributed about 70 per cent to the overall sales during the quarter. The brands also sustained their market share, led by the company’s focus on branding activities like organising various large scale autumn winter bookings at a mega event organised in Goa and via other promotional activities,” said Kewalchand P Jain, chairman.


Many branded apparel players started with discounts and other promotional offers ahead of the Dussehra and Diwali consumer demand.


These lured customers to increase their purchases; seasonal discount offers were also extended beyond the normal one-month period.


“The improvement in sales and net profit of branded apparel makers was led primarily by a decline in raw material prices. Prices of all raw materials — cotton, yarn, etc — declined,” said an analyst with a leading equity brokerage. 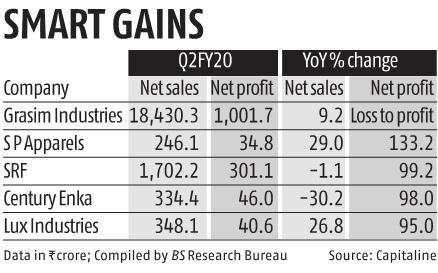 The benchmark MCX spot cotton (29 mm) price declined 8.5 per cent in the quarter to Rs 19,910 a bale (170 kg), from Rs 21,760 a bale in early July. Cotton prices fell in both October and November, too. Since October, these are down seven per cent, to trade currently at Rs 18,540 a bale. With a fall in export, cotton yarn and manmade fibre prices also declined during the September quarter. “Cotton yarn continues to see reduced export, owing to lower demand and increased competition. Export fell by 40 per cent month-on-month during July, majorly due to the 80 per cent year-on-year fall in demand from China.


China has entered into the second phase of a free trade agreement with Pakistan on goods worth $64 billion, of which cotton yarn directly competes with India’s,” said Abhishek Rathi, senior analyst at India Ratings and Research.


Manmade fibre saw a consecutive month of stabilisation on stable crude oil prices in August. However, there was instability in prices during September with the attack on the Aramco refinery in Saudi Arabia.


Price have since fallen 20 per cent with the news of fast recovery of the attacked sites. While rural economic distress continues, apparel makers have consolidated their business, with focus on profitable ventures.


While analysing Page Industries’ quarterly profit, Macquarie said: “The strong recovery in sales growth is positive but sustaining this will be key. The quarter was driven by early festivals and higher retail incentives, but there was margin pressure with this and inflation in operating cost.”