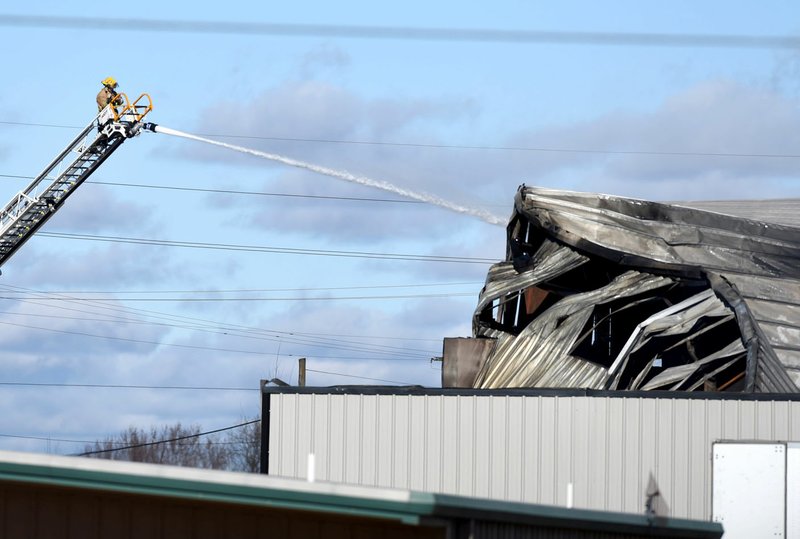 NWA Democrat-Gazette/DAVID GOTTSCHALK A city of Springdale firefighter hoses down the southwest area of the A-Advantage Warehouse, Distribution & Transportation, at 659 E. Randall Wobbe Lane on Monday in Springdale. The fire at the warehouse fire started around 2:30 p.m. Friday. The Springdale Fire Department is fighting and monitoring the fire from the exterior.

SPRINGDALE — Inspectors from the Fire Department and insurance companies can’t enter a warehouse to determine what caused a three-alarm fire until the building is made structurally sound, Fire Chief Mike Irwin said.

He said department inspectors will cooperate with insurance company inspectors for various clients that had items in the building. They will enter the building together to determine the cause and path of the fire after it has been made structurally fit, he told the City Council on Monday.

He added inspection probably will involve moving pieces of debris one at a time.

“But we never really declare a fire out until we can physically get in there,” said Capt. Matt Bagley.

The fire department determined Dec. 27 to let the fire continue to burn until the contents of the warehouse fueling the fire were gone.

Capt. James Kehrli was injured when he was trapped under fallen debris on the first day of the fire. He is recovering from his injuries, Irwin said.

Irwin said several other firefighters were strained and very sore from working the fire line, and they also were given time to recover.

The department’s investigation has started with interviews of warehouse employees and reviewing videos.

“There’s too much money for the insurance companies to let this go. There’s millions of dollars involved,” Bagley said.

The fire department must “make a reasonable attempt to determine the origin and the cause” under state law, he said.

Phil Phillips of Springdale, who owns the warehouse, referred comment to Jim Calton, his insurance company investigator. Calton did not return a phone call Tuesday.

Phillips purchased the building in 2003, according to county records. The building was constructed in 1985 as a furniture plant for Whillock Manufacturing Co.

Among other items, the building was being used to store Styrofoam containers for the Cargill poultry processing plant across the street. Irwin listed boat and car covers, glass jars, plastic “and I don’t know what all else was in there,” he said.

Styrofoam stacked to 25 or 30 feet in the warehouse challenged firefighters, Irwin said. City fire codes restrict storage heights according to the products stored. The limit is 6 feet for Styrofoam, he said.

Irwin noted other items with other height allowances might previously have been stored there.

The high stacks probably led to a very hot fire near the roof, which led to its collapse, Bagley said.

Irwin said the sprinkler system of the building was working when firefighters entered, but the system collapsed fairly early in the fire.

Irwin said his department wasn’t equipped to fight that large of a fire.

“You can’t really plan for these,” he said. “You can’t have all the personnel on staff. We could have used 100 firefighters, and there’s no way we can staff 100 firefighters on a shift. But fires like this don’t happen that often, thank goodness.”