SACRAMENTO, Calif. (AP) — California expects to start administering the new Johnson & Johnson vaccine next week and to receive more than 1.1 million of the single-dose shots in the next three weeks, Gov. Gavin Newsom said Friday.

The vaccine, still in the final federal approval process, has fewer handling restrictions than the Pfizer and Moderna vaccines now being used. Those vaccines require two doses to be fully effective and must be stored at extremely low temperatures.

News of a possible third vaccine came as California announced it would be able to administer 3 million doses a week starting Monday, even though it’s currently doing about 1.4 million shots due to constrained supply. 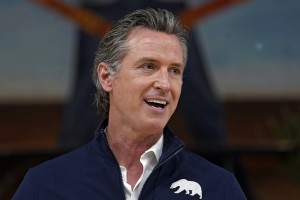 FILE – In this Feb. 21, 2021, file photo, California Gov. Gavin Newsom takes questions from the media during a visit to a mobile vaccination site at Ramona Gardens Recreation Center in Los Angeles. Newsom signed a $7.6 billion coronavirus relief package on Tuesday, Feb. 23, 2021, that will give at least $600 one-time payments to 5.7 million people while setting aside more than $2 billion in grants for struggling small businesses. (AP Photo/Damian Dovarganes, File)

The state is in the process of switching over to a centralized vaccine appointment and delivery system administered by insurer Blue Shield that should be complete by March 31. State officials also announced that as of Monday, all residents would fall under the same eligibility criteria to receive the vaccine regardless of where they live in the state.

Currently, some of the state’s 58 counties are vaccinating teachers, food and agriculture workers and other essential personnel as well as seniors 65 and older, while other counties are sticking solely with seniors. It was unclear what this would mean in terms of getting appointments on Monday.

The Biden administration has told California it can expect to receive 380,000 Johnson & Johnson vaccines next week and Newsom said he expects the same amount each week for three weeks, but it’s just a preview.

“It’s consistent based on that three-week window,” he said at a Fresno news conference. “We will figure out where to land in terms of the distribution.”

Distribution of the J&J vaccine still is contingent upon federal Food and Drug Administration and Centers for Disease Control and Prevention action, though Newsom said he is confident of the quick approval and availability.

Addition of the J&J vaccine would come as California is seeing dramatic drops in virus cases and hospitalizations after record highs in early January. The 5,590 people hospitalized now are only about a quarter of the peak total, while the rate of people testing positive in the last week fell to 2.7%.

“There’s bright light at the end of the tunnel,” Newsom said during what have become near-daily appearances at vaccination centers around the state.

Newsom, a Democrat, faces the possibility of a recall election later this year over his handling of the pandemic, and regardless must run for reelection next year. And despite the positive trends there remains continued uncertainty over unequal, sometimes chaotic, vaccine distribution and testing.

Newsom said he wanted a more seamless vaccination system when he announced in late January that he had tapped Blue Shield to develop a statewide vaccine network that would meet equity metrics and get doses out quickly.

The no-bid, $15 million contract, which Blue Shield says it will not profit from, calls on the insurer to develop an algorithm for vaccine distribution but critical components are unknown, such as how to measure equity and what the monthly equity target will be.

The switch has been fraught with uncertainty as counties that had developed their own methods of signing up residents will have to turn over scheduling to a new statewide appointment and data collection system called My Turn.

Paul Markovich, president and CEO of Blue Shield of California, said in a Friday call with reporters that they are talking to counties and their hope is to not make material changes to the networks in place. He that about 30 providers have signed contracts to administer vaccines under the new system, including hospitals, a federally qualified health centers and at least one pharmacy chain.

“Give us a chance to make this work,” he said. “I think there’s been a lot of speculation of all the things that could potentially go wrong. It’s our job to get this to work and work for everybody.”

The remaining counties, including much of the San Francisco Bay Area, will begin the switch March 7 with Blue Shield taking full management control March 31.