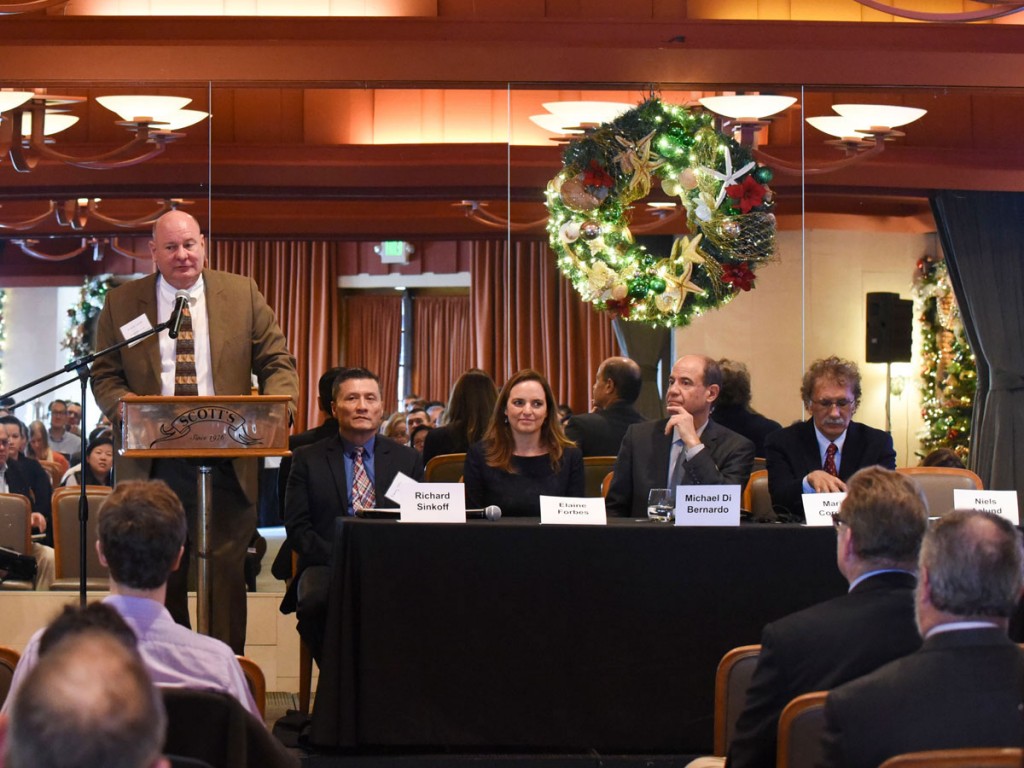 The majority of California ports came together on December 3rd to announce their plans for improved defense against sea level rise recognizing that climate change poses a serious threat to U.S. ports and coastal communities.

The “Storms, Flooding and Sea Level Defense” conference was coordinated by the Propeller Club of Northern California and took place at Scott’s Seafood in Oakland, California.

Mario Cordero, executive director, Port of Long Beach cited the Port’s collaboration with the Port of Los Angeles on the Clean Air Action Plan to reduce emissions at terminals and by trucks picking up and delivering freight. The Port has published a detailed sea level and climate adaptation plan addressing future increases in sea levels.

Niels Aalund, president, Propeller Club International and senior vice president, West Gulf Maritime Association, Houston, Texas told conferees that Texas has been experiencing growing disruptions from storms such as Hurricane Harvey, which caused $125 billion in damage to Houston and nearby communities in 2017. Storms pose a growing threat to Texas ports, communities, commerce and the petrochemical industry in Galveston Bay. As a result, plans are under way to build a huge storm surge barrier to protect Galveston Bay that is projected to cost $40 billion.

Phillip Gibbons, program manager, energy and sustainability, Port of San Diego said the conference provided a benefit to California ports because “this was the first time that ports had the chance to sit together and speak with a collective voice on the importance of our maritime industry and the unique setting in which we are located.”

Adrienne Newbold, senior civil engineer and program manager, Port of Los Angeles said the Port was focused on efforts to “develop a management system to track extreme weather events and associated damage and disruption to justify funding for future related projects” and develop a “feasibility study to determine most appropriate temporary flood protection based on storage, cost, erection, and maintenance.”

Kristine Zortman, executive director, Port of Redwood City, noted that the Federal Emergency Management Administration (FEMA) had “designated the Port as an FSA (Federal Staging Area)” following the Port’s $17M capital investment to raise the height of its wharfs that “can accommodate 3-5 ft. sea level rise” and a “8.9 magnitude earthquake” The result is that the Port is playing “a critical role in recovery efforts for the South San Francisco Bay region.”

Giles Pettifor, environmental manager, Port of Hueneme said the Port had suffered damage from Hurricane Marie in 2014 that also impacted the Ports of Long Beach and Los Angeles. The Port of Hueneme is upgrading its defense against future storms.

California Insurance Commissioner Ricardo Lara urged insurance companies to seriously factor the future costs of climate change including storms, flooding and sea level rise. He said many people still do not realize the importance of recalibrating insurance toward climate change so as to anticipate future climate events rather than try and repair the damage after the fact.

Kate Gordon, director, Governor’s Office of Planning and Research, told a luncheon audience that the State of California will increase its support of climate change initiatives taken by ports, regional and local governments.

Joost de Nooijer, project engineer flood risk management, Port of Rotterdam, said in an interview: “As a result of the acceleration in the rise of sea levels, the Port of Rotterdam is developing strategies for the port area and facilities to anticipate for long-term risks. This is based on the theory that it is better to make the investment now rather than pay the costs of a disaster later.” The Port of Rotterdam has “worked out strategies together with companies like Shell, Exxon Mobil and British Petroleum and will begin working with container terminals in the Maasvlakte complex.” De Nooijer noted: “The Port of Rotterdam has a dredging company under contract to perform maintenance dredging of all port facilities. This allows the Port to keep all berths and ship channels fully operational at all times.”

André van Hassent, asset manager constructions and dredging, Port of Rotterdam has responsibilities for construction and dredging and has worked for the Port of Rotterdam for 31 years. He specializes in maintenance dredging. In an interview, he said that Dutch dredging companies emphasize deploying modern state-of-the art vessels and equipment for dredging. As a result, a typical dredging job at the Port of Rotterdam might cost as low as 2 euros per cubic meter which translates into U.S. $2.22 per 1.3 cubic yards. In comparison, a California port reported that it paid $37 per cubic yard for a maintenance dredging project in 2019. California port officials note that in California and other Pacific Coast states environmental regulations limit the number of months dredging companies can dredge so as to protect fish spawning. In addition, dredging costs rise with the use of mechanical clam shells to scoop out dredge material that are sometimes needed to protect sensitive environmental areas. Both factors increase dredging costs compared to hopper dredging that is routinely used in the Netherlands, utilizing hoses to suck up dredge materials in a faster and cheaper manner. Placement of dredge materials into wetlands also requires more precise work and adds to overall costs. In the Netherlands, Van Hassent said that a dredging company will routinely charge the equivalent of $111,000 per week for a dredging job.

Patrick Barnard, research geologist, U.S. Geological Survey (USGS), led a team that released a USGS report on March 13th, that projects a “likely” 0.25 meter or 9.8-inch sea level rise by the year 2040. The impact to California factoring “an extreme storm … would cause substantial flooding that would directly affect over 150,000 residents and $30 billion in property damage.”

Juliette Finzi Hart, oceanographer with USGS, who also helped organize the conference, noted: “The (USGS) report incorporates new science that provides us with better projections because historical data is not as relevant when sea levels are rising. In California, wave energy adds to storm surge as well as sea level rise to create a stronger effect on coastal communities… This is happening sooner than expected… In California, emergency services agencies are pretty savvy on the threats posed by sea level rise…”

The Coastal Storm Modeling System (CSMS) used for the projections in the USGS report “was designed to thoroughly assess future coastal flooding exposure by integrating SLR (sea level rise), dynamic water levels and coastal change.” Hart said CSMS “can be used by planning, emergency services and insurance companies to make risk assessments for new and existing cities, ports, airports, highways, rail lines, bridges and levees. Local, state and federal emergency services agencies need to upgrade their planning to take into account intensifying damage from sea level rise beginning in 2040 and not 2100. The sea level rise threat is a world-wide threat: six hundred million people live in coastal zones around the world today and one billion will live in these coastal zones by 2050.”

Rob Cifelli, radar meteorologist, National Oceanographic and Atmospheric Administration (NOAA), collaborated with USGS on the CSMS. At the conference, he outlined the Advanced Quantitative Precipitation Information (AQPI) system that is being developed for the San Francisco Bay Area with the “goal to improve early warning through monitoring, and prediction of precipitation, streamflow, and storm surge integration of capabilities for many users.” The benefits will help “flood mitigation, waste water management, water supply, water quality, emergency management, transportation.” Cifelli said that he is hopeful that machine learning will accelerate the ability to quantify data and projections. He cautioned that promises by developers of experimental super-fast quantum computers have yet to be proven.

Amy Hutzel, deputy executive officer at the California State Coastal Conservancy, discussed how Measure AA, the Clean and Healthy Bay Parcel Tax of 2016, a nine-county funding measure in the Bay Area that is generating $25 million per year for San Francisco Bay restoration through a $12 annual parcel tax for the next 18 years. The San Francisco Bay Restoration Authority is a regional agency responsible for funding to projects that restore, enhance and protect wetlands and wildlife habitat in San Francisco Bay.

In May 2019, the Conservancy disbursed funding to the U.S. Army Corps of Engineers (USACE) San Francisco District to pay for the incremental cost of placing the sediment at restoration sites. The Corps can use a beneficial placement site if the cost is paid by a non-federal sponsor. In this case, the Conservancy acted as non-federal partner to make the beneficial placement possible.

Stu Townsley, deputy for project management U.S. Army Corps of Engineers, San Francisco District hailed the cooperation with the Coastal Conservancy and Bay Restoration Authority in expediting the deployment of clean dredged materials, including from port maintenance dredging, to wetlands sites in the Bay Area. In the past, dredge materials were often dumped into the Pacific Ocean. Increasing the growth of wetlands allows them to naturally absorb higher water levels without the construction of levees. Critics say levees move high water to places that are less protected.

Townsley noted that 3 million cubic yards is annually dredged from the San Francisco Bay. In June, Townsley told a public meeting in San Francisco that the Corps is constrained by federal budgets that are not increasing. This complicates the effort by the Corps to address the growing problems of flooding and storm surge challenges.

Steve Goldbeck, deputy director for the San Francisco Bay Conservation and Development Commission (BCDC), says his agency, which regulates new development in the Bay, has adopted new rules to expedite the permit process for the deployment of dredged materials towards wetlands augmentation.