Canada ‘will stop at nothing’ to bring in vaccines: procurement minister

In an interview with As It Happens host Carol Off on Friday, Anita Anand echoed Prime Minister Justin Trudeau’s earlier reassurances that Moderna and Pfizer will hold up their end of the bargain to send six million vaccine doses to Canada by the end of March, and 70 million by the end of September.

This is despite vaccine delivery delays over the last month due to manufacturing issues in Europe.

Here is part off Anand’s conversation with Off:

Do you understand why Canadians might worry that when they watch the flow of vaccines from both Pfizer and Moderna reduced to a trickle, that they are in a bit of a panic about this?

I do understand and I am also disappointed about the temporary reduction that we experienced last week. But I want to assure Canadians that the shipments of vaccine did return over the past week. And so we are continuing to ramp up with our vaccine delivery and we will see a steep incline come the middle of February through to the end of March and then into the spring.

That’s our commitment to Canadians, and that’s what we’re working on every single day. 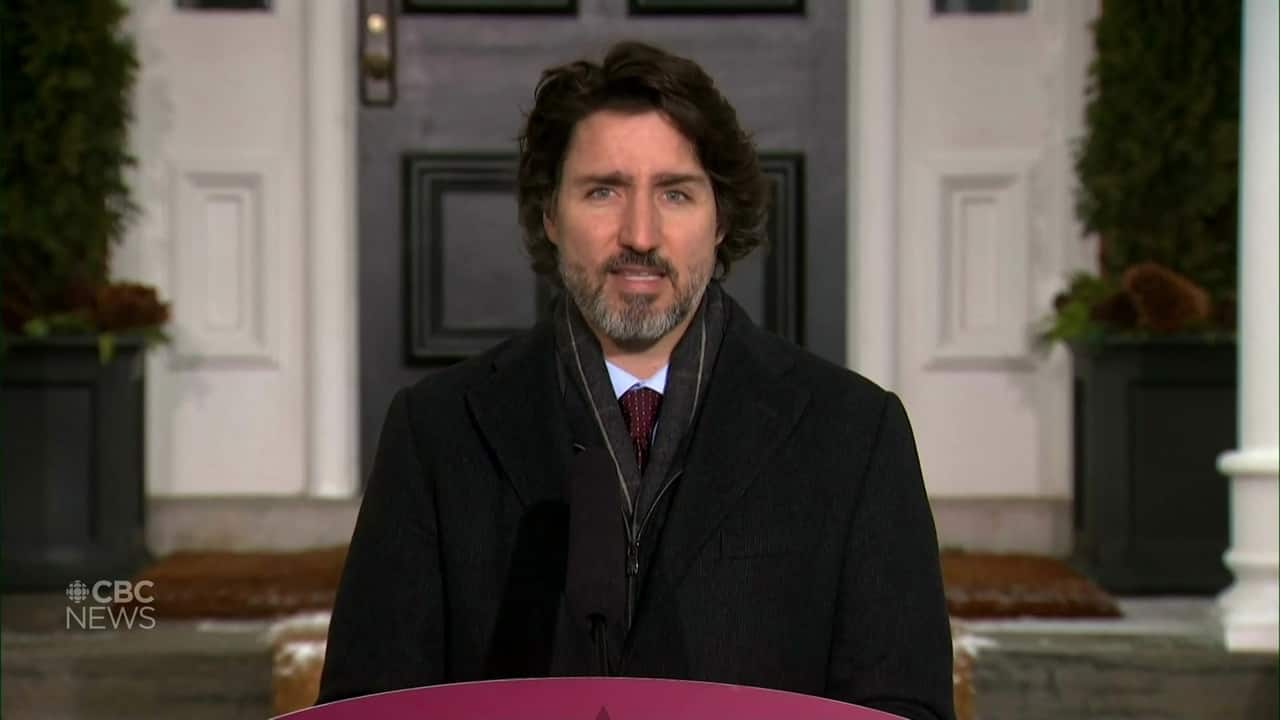 Prime Minister Justin Trudeau made the remarks during his opening address to Canadians about the state of the fight against the virus on Friday. 3:02

Your government promised 366,000 Pfizer doses per week in February. I’m not saying that you’re at fault for this, but do you think that your government set up expectations that you simply could not deliver on?

One of the things that I want to make sure everyone realizes is that our vaccine contracts specify quarterly delivery timelines, and they have from the very beginning of the contract. We always knew that we would be entitled to six million doses per quarter.

The delivery schedules that we provided are provided in order to allow provinces and territories to plan. They are for planning purposes only. And so the commitment for six million vaccines by the end of the quarter remains.

We are simply trying to deal with a slowdown in the production facilities in Europe of these vaccine manufacturers. And once we deal with these temporary reductions, we will then be back on track to ensure we meet our quarterly delivery timelines.

We did expect some turbulence, but we are overcoming it in order to remain on track. For example, we did have our vaccine shipments leave Europe despite the fact that Europe did put in place a control or transparency mechanism that affected most countries.

I know you’re saying [these are] quarterly contracts … but you gave specific numbers that were going to arrive, and those numbers have not happened…. Do you think that you should not have, in retrospect, given those kinds of commitments, set up those kinds of expectations, that you were unable to deliver on?

We are in a global environment that is extremely competitive, where production is being ramped up around the world. And the reason why we provided those numbers is because that is what the vaccine manufacturers told us. And we want to be transparent with Canadians, and certainly with the provinces and territories who are seeking to plan.

We were surprised and we were disappointed when the vaccine manufacturers revised the estimate that they provided to us on a week-to-week basis. By the same token, we sought assurances that they would not renege on their quarterly deliveries, and that’s exactly what we were able to receive from them. 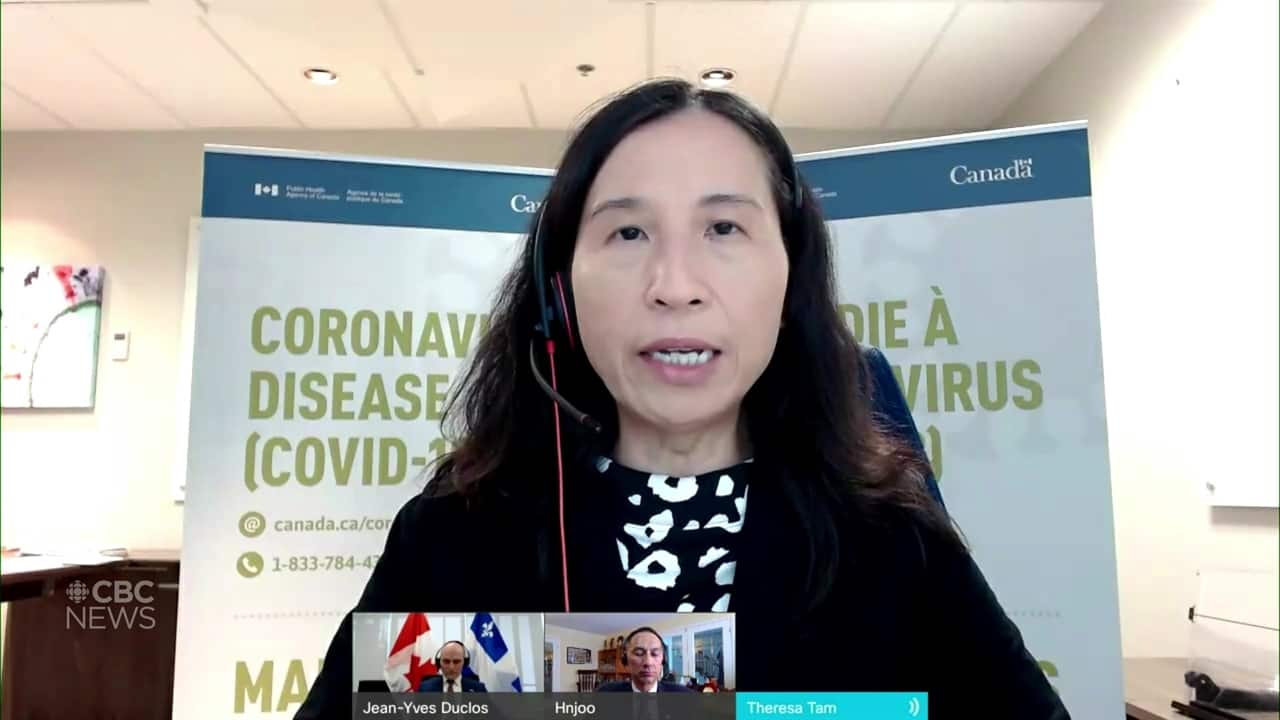 Dr. Theresa Tam responds to questions about at what point will Canada’s vaccination rate lead to lifting stay-at-home orders. 2:28

You were surprised and disappointed because they told you those numbers, and you told us those numbers. And now you’re telling us numbers that they have told you again. And so why should you trust them, and why should we trust you?

Whether it is good or bad news, we come to Canadians with the information that we have. That’s very important to me as a minister, and that’s important to our government.

We have 1.4 million vaccines which have arrived in this country,

The important point that we heard at the bargaining table was from the vaccine manufacturers. [Setting] up new manufacturing of the vaccine requires resources from the producer. Given the scarcity of these resources, producers emphasized that locations had existing capacity. And we needed to make sure that they would be able to manufacture quickly at a global scale. That simply wasn’t present in Canada at the time we were concluding our bilateral agreements.

And so we pursued a two-track approach. The first track was to secure seven bilateral agreements, which led to us having the largest number of doses per capita of any country in the world [from] over seven vaccine candidates.

And the second track was to build up domestic capacity. So we invested in the [National Research Council Canada] by $126 million. VIDO-InterVac in [Saskatchewan], $35 million. Medicago, $173 million. Providence [Therapeutics], $5 million. Precision Nano[Systems], $25 million. And then the Novavax contract this week for domestic production.

We have a pandemic, as you know, that is killing hundreds of thousands of people around the world. And yet we have to depend on Big Pharma and being part of highly competitive contracts, many of them secret, to try and get access to something that is going to save the lives of people in our country and others. Is that a really big problem for all of us, that that is what it comes down to?

I realize that there is the desire to see these contracts. I just want to emphasize, as a former law professor, that contracts are bilateral agreements made between two parties and therefore, the government of Canada cannot simply take a unilateral decision to release our contracts without putting in jeopardy our entire vaccine supply.

How worried are you that these drug companies could hang us out to dry?

At the current time, our negotiations with these drug companies have been very solid. We are working to make sure we have a stable relationship with them so that they work hard to get the shipments into Canada each and every week. And that’s exactly what we’ve been able to do over the last week with getting shipments out of Europe on Friday, on Wednesday and again today.

I would like to reassure Canadians that we are on it each and every day. We are on top of this file. It is our government’s top priority. And we will stop at nothing to make sure that vaccines come into this country.

Written by Sheena Goodyear. Interview produced by Kevin Robertson. Q&A has been edited for length and clarity.