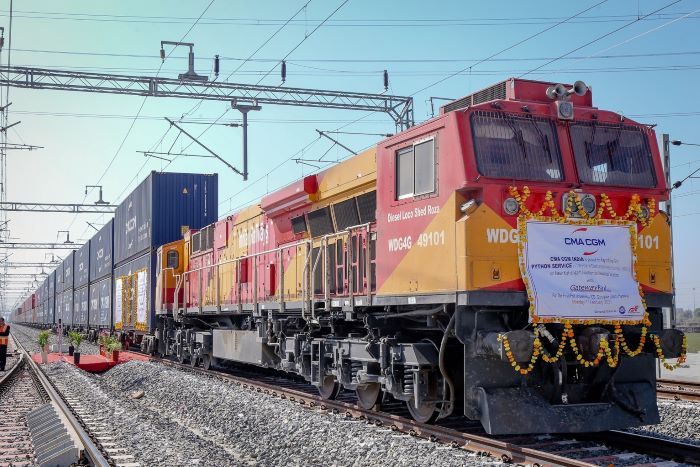 Container carriers active in trades out of India are increasingly investing in double-stack block train offerings bundled with priority terminal handling as they are primed to capitalize on national rail upgrades under way. That, in turn, is accelerating the pace of intermodal activity that has long proved less appealing to hinterland shippers traditionally favoring trucking for multiple competitive factors.

The latest rail push comes from CMA CGM, which boasts an expansive ocean-side network out of Indian ports. In an industry-leading inland pitch, the carrier last week rolled out two parallel double-stack train services — designed on a “ship-to-rail” model — from private ports Mundra and Pipavav to Garhi Harsaru, an inland container depot (ICD) in Haryana state, involving complex changeovers en route. Operated in conjunction with private intermodal company Gateway Rail Freight, the trains were integrated into a single railcar at New Kishangarh — an intersection point leading to the newly opened 306-kilometer high-speed rail stretch — and later decoupled from each other at the New Ateli rail junction for their hauls to the final destination.

The French liner, in a statement to JOC.com, said this unique rail offering — dubbed “python” — has the potential to speed ICD cargo flow to and from the national capital region, the bulk of which moves through Mundra and Pipavav.

“The Python rail service is one of the premier services and will be a game changer for the industry,” Atit Mahajan, managing director of CMA CGM (India), said in a statement. “It will increase our cargo capacity and will also enhance our intermodal offerings to our customers [through the western dedicated freight corridor].”

In a broader sense, higher carrying capacity is the key draw for double-stacked trains — generally 180 TEU versus 90 TEU for a normal haul — which is a win-win situation for all stakeholders.

For CMA CGM (India), this specialized rail activity builds on its ongoing efforts to solidify customer-centric inland services after the company began running single-stack freight trains between Mundra and ICDs at Dadri and Tughlakabad, near Delhi, in 2008. The carrier currently has nine direct, long-haul weekly calls at Mundra alone, besides regular feeder activity there.

“We are seeing a tremendous industry response to our block train expansion as customers are able to enjoy shorter transits and time-definite delivery of their exports and imports,” the company said.

The block train solution typically offers a ramp-to-ramp transition from sea to rail and vice versa for containers booked by a single carrier.  By contrast, under off-terminal yard activity, boxes of multiple liners are railed in/out on a first-in, first-out (FIFO) basis, often causing turnaround delays. A recent Maersk-led block train movement from Kolkata to Jawaharlal Nehru Port Trust (JNPT) is another example of that rapidly evolving dedicated intermodal trend.

Additionally, JNPT is actively exploring piloting double-stack train service with “dwarf containers,” which are relatively shorter than other conventional boxes and can play a major role in addressing trainload height concerns while traversing tunnels and bridges.

“The [freight] corridor will increase the transportation efficiency and reduce the cost for customers,” Gateway Rail said in a statement.

Bency Mathew can be contacted at [email protected].