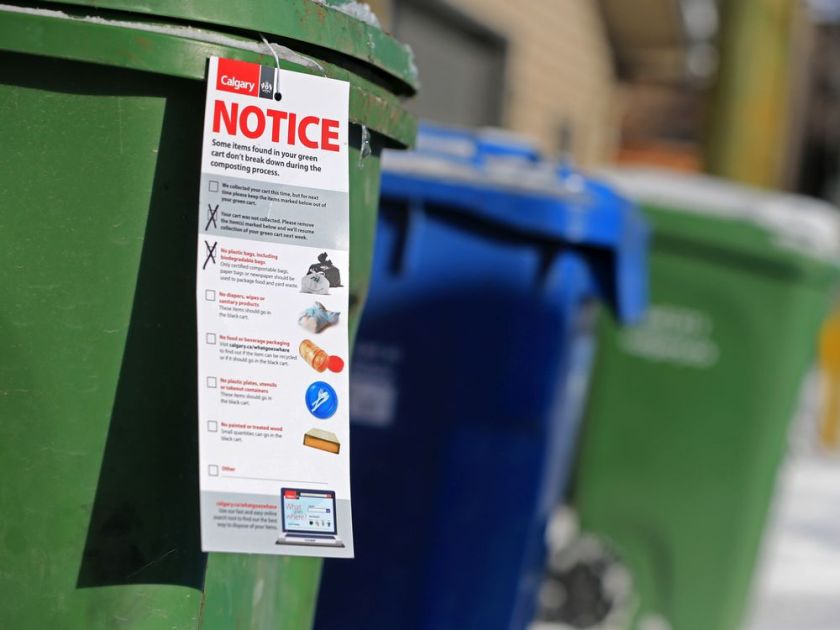 Different stakeholders are at odds over a spot-check waste and recycling program that significantly expanded this year to ensure proper refuse is being deposited in green and blue bins as contamination rises.

The cart-check program, where staff search through residential bins and tag offenders who dispose of the wrong materials, has grown to inspect more than 200,000 homes, compared to just 5,000 the previous year.

Responsibilities were also shifted from city staff to a third-party outfit responsible for checking, tagging and reporting on green and blue cart usage.

Sharon Howland, leader of program management for waste and recycling, said it’s been a highly successful expansion that will save the city money and ensure worker safety.

“It’s all about protecting our fellow Calgarians, our family, our friends that work at the recycling facility, the composting facility and are out there driving those trucks,” said Howland.

She explained that when contents are contaminated, the city has penalties applied to them by the parties that sort the material. Additionally, safety incidents, like if Calgary fire needs to put out a blaze at facility, comes with associated costs.

It’s not helpful when elected officials refer to this as the garbage police.

“So we’re spending money on the front end to have the cart spot-check program to prevent contamination, in order to avoid all those costs on the back end,” said Howland.

She said numbers from this year’s program showed four per cent of green carts, for organic waste, and 29 per cent of blue carts, for recycling, were contaminated. Those bins were tagged with notices detailing appropriate waste for each bin.

When Tetra Tech, the company who took over the program, re-visited the offending households the program proved successful as contamination decreased by 17 per cent, said Howland.

However, not everyone is convinced of its value.

City Coun. Jeremy Farkas said waste and recycling is a top issue for his constituents and he’s heard from many who dislike the snooping program.

“There are serious consequences of contamination, including harm to people, damage to equipment and significantly increased costs if we can no longer market the material, but at the end of the day it’s both citizens and, especially, the city that need to take responsibility,” said Farkas.

“I personally hate the idea of the garbage police. I have to question if it’s effective versus educating people directly. People don’t like the idea of the city going through their garbage and I have to wonder if there are more effective ways of fighting contamination.”

He said council was warned about increased contamination when the city shifted from weekly to bi-weekly black bin pick-up. Farkas wants additional information on whether reversing that shift might be a better option than the spot-check program.

On the flip side, Howland said residents have been receptive to the program and most concerns are erased once workers explain the goal of the program and how it’s cost-effective and increases safety for fellow Calgarians.

Last week, members of the audit committee heard from professionals involved in the blue cart contamination prevention audit and Farkas posed questions to Howland and others on the merit of the program. During the meeting, Coun. Jyoti Gondek said some people have dubbed the workers “garbage police,” much like Farkas stated.

Just before the audit was carried out, Coun. Diane Colley-Urquhart said using that type of language when speaking about the program is unacceptable.

“It’s not helpful when elected officials refer to this as the garbage police. Citizens have a significant responsibility in a city service that’s provided,” said Colley-Urquhart. “In our communication, our language needs to be very careful in how we reference this whole area.”