CME: Cattle Inventories in Feedlots Up from a Year Ago 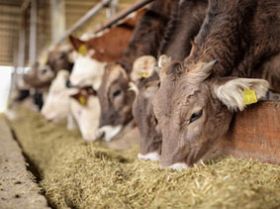 CME: Cattle Inventories in Feedlots Up from a Year Ago

US – Cattle inventories in feedlots with a capacity of 1,000
head or more on 1 December were up 2.5 percent from a year
earlier, according to Steiner Consulting Group, DLR Division, Inc.

Placements in November exceeded the expectations of industry analysts that expected placements to be up only 1 percent, on average.

Marketings of cattle from 1,000 head capacity feedlots in November were down 3 percent from a year earlier, in line with expectations.

Marketings have been well balanced against inventory. Inventories of cattle on feed longer than 120 days on 1 December were up from a year earlier by 98,000 head.

A month earlier, inventories were up 87,000 head. The modest increases relative to a year ago do not seem to reflect restrained packer interest in buying cattle as Choice steer prices have moved up 14 weeks in a row as of this week.

Inventories of cattle on feed ranging between 90 to 120 days are tightening, which could be supportive for cattle values in the late winter and earlier spring. That component of feedlot inventories has been running below a year earlier since 1 September.

The premium to the December futures contract is about $4, currently, similar to a year ago, but down from a $5 premium a month ago.

The strength of the cash cattle market in recent weeks has made it difficult for deferred contracts to maintain the premiums that existed in prior weeks. 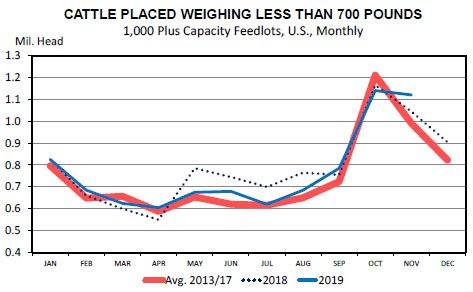 Excluding the increase in light weight cattle, placements would have only been up 1.8 percent, which was in line with pre-report expectations.