Following IHS Markit’s previous update on the upside risk of winter demand, dry bulk vessels anchored near the northern Chinese ports have increased significantly to an average of 372 vessels in week 3 (starting on 11 January 2021) from an average of 281 vessels in week 50 (starting on 13 December 2020) a month ago, and an average of 130 vessels a year ago owing to record-breaking cold weather in China that caused the delay in vessel operations in northern China. As of 14 January 2021, around 36.2 million deadweight tons of dry bulk fleet are sitting off the coast of North China, including 11.8 million metric tons of iron ore, 6.2 million metric tons of thermal coal, and numerous coastal vessels awaiting for domestic coal shipment to South China.

Since China transports domestic coal from northern Chinese ports to other Chinese regions, the delay in northern Chinese ports worsens the coal shortage situation in China amidst the already severe tightness in domestic supply. Many domestic coal mines in China had announced plans to cut production at the end of December to ensure safety at the end of the year along with the ongoing crackdown on illegal mines. Moreover, recent increase in COVID-19 cases made inland transportation more difficult. Consequently, Indonesian shipments increased significantly to South China (8.1 mt, up 89% y/y) and East China ports (8 mt, up 123% y/y) to replenish thermal coal stockpile of power plants in these areas, while shipment to North China slowed to 1.3 mt during December 2020, according to Commodities at Sea. 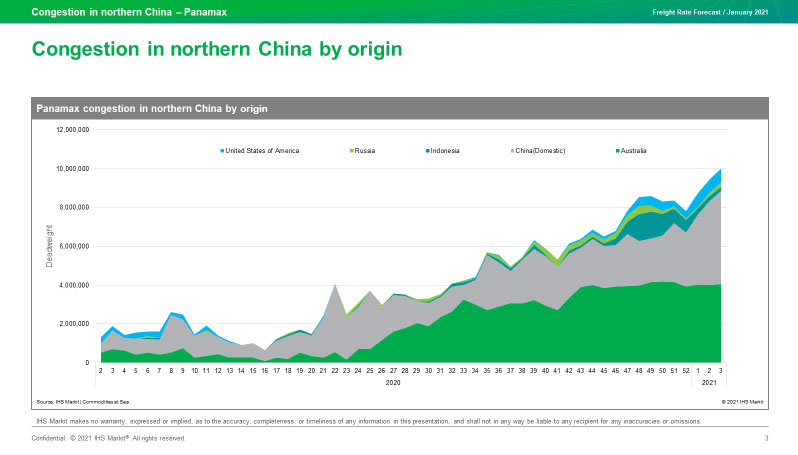 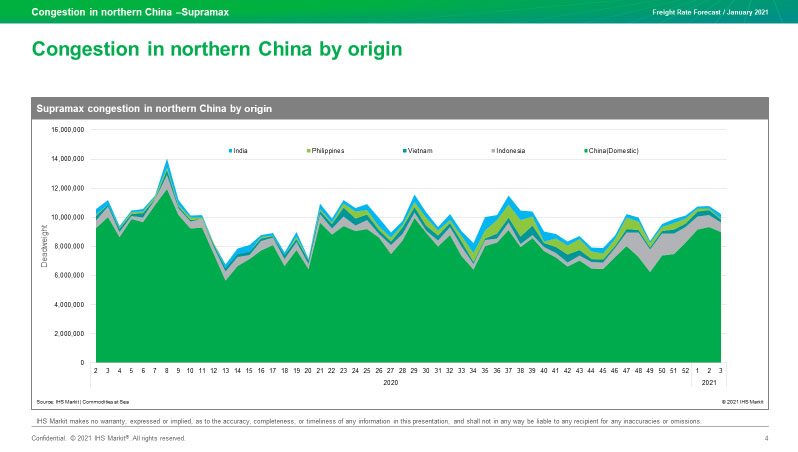 IHS Markit CMM (Coal, Metals and Mining) group believe that despite the rise in temperatures, buying interest remains strong and continues before the Lunar New Year, because domestic miners are already operating at full utilisation rates and are expected to soon prepare shut down for the long holidays.

All of these factors are expected to support count-seasonal strength in dry bulk freight rates in the short-term However, downside risk still remains for vessels opening in February because (1) China’s import control will continue after winter period, with China affording no new quota for traders yet and (2) restocking activities will slow around the Lunar New Year period. (3) Most importantly, there will be an increase in the number of ship’s opening in the Pacific once the weather improves, and will likely face high competition to find next employments until (4) the Brazilian new grain season starts which is expected to be delayed.
Source: IHS Markit