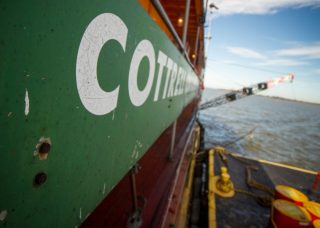 The U.S. Army Corps of Engineers and Cottrell Contracting are set to begin dredging the Norfolk Harbor Inner Channel and channel to Newport News on Saturday.

Norfolk District will manage the operations and maintenance project as part of an effort to remove shoaling, allowing safe and unrestricted navigation for the largest commercial and military vessels transiting into and out of the Port of Virginia.

Officials expect it to take five months to complete the work.

The $10.4 million contract, awarded in August to the Chesapeake-based company, permits the dredging of 1.1 million cubic yards of sediment from the federal channel. Cottrell will pump it by pipeline to Craney Island Dredged Material Management Area in Portsmouth.

Steve Powell, Norfolk District project manager, said that Cottrell is dredging to a depth of 52 feet below mean lower low water, a formula based on the lowest tide’s average height measured over a 19-year period.

“This dredging depth ensures that as the channel shoals in between maintenance cycles, the shoals will still be below 50 feet, the depth required to keep commerce flowing in the Port of Virginia,” he said. “It will be performed in a manner that ensures the continued safe and unrestricted navigation in the harbor.”

Maintenance dredging is required every 12 to 15 months in Norfolk Harbor Channel and every three to four years in the channel to Newport News. Without it, the high rate of shoaling would severely restrict vessel movement within the port.