Bodyboards are for sale for less than $10 at a Kahului store on Wednesday. The Maui County Council is considering a bill that would prohibit businesses from selling and renting disposable bodyboards in hopes of cutting down on the amount of foam left on beaches and in landfills. — The Maui News / MATTHEW THAYER photo

Hoping to build on recent efforts to outlaw foam containers and disposable foodware, the Maui County Council is considering a ban on the sale and use of polystyrene foam coolers and ice chests as well as disposable bodyboards.

Disposable bodyboards made with lower-quality materials like polystyrene foam are not long-lasting and “leave a lot of rubbish,” Paltin said during the committee meeting.

“After a swell, the beach would be filled with four to five broken styrofoam boogie boards,” she recalled. “The effects that we’re seeing, the buildup in the landfill, the hidden costs to the community of all this rubbish — we’re going to have to expand the landfill. It just kind of made sense. This is a raise-some-awareness type of issue.” 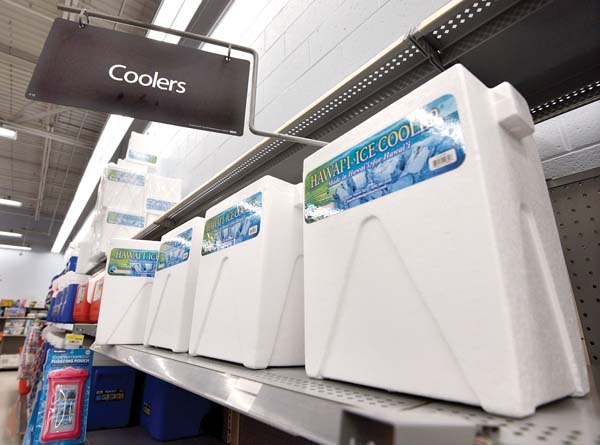 Retailers and renters are subject to the restrictions. The bill does not prohibit the usage of the boards and is not meant to penalize those who may already own disposable bodyboards, Paltin said, but rather to encourage the use of environmentally friendly and more durable boards, which would reduce the burden on landfills and protect marine wildlife from microplastic pollution.

The bill would take effect Jan. 1 and would also differentiate between a durable board and a “cheap board” is that is not intended for wave riding.

Violators would be subject to fines, which would be deposited into the environmental protection and sustainability fund.

Maui County has taken steps in recent years to reduce the use of disposable and foam products, implementing a ban on polystyrene foam food service containers in 2018 and approving a measure in 2020 to ban plastic disposable foodware — including forks, knives, spoons, straws, coffee stirrers, cocktail picks and chopsticks — starting in 2022. The council is now proposing to add polystyrene foam coolers and ice chests to the definition of plastic foodware.

The intent of the bill is to expand the definition of single-use plastic foodware and add more items to the list of products “that we don’t want on the island,” said Council Member Kelly King, who chairs the committee and proposed the update.

“To me, it was just a problem if (foam coolers and ice chests) were used at all, because they do generally end up on a beach or at a park and then deteriorate and end up in our ocean,” she added.

Deputy Director of Environmental Services Shane Ogawa said that plastics and foam products have the “slowest degradation rates” at the landfill. Foam is the second biggest contributor to wind litter at the solid waste site, behind plastic bags.

Council members agreed that the bills will be effective in keeping plastics and polystyrene foam from polluting land and marine wildlife and resources, but Council Member Mike Molina questioned how the county would enforce the measures.

Tamara Farnsworth said that the Maui County Department of Environmental Management supports all efforts toward a plastic-free island and is “happy to get ready to implement and enforce” rules outlined in the County Code. However, she was concerned that the department doesn’t currently have the staffing or experience to confront violators.

“This is something we would really have to think about,” Farnsworth said. “It’s not something we have encountered previously. . . . What we do is provide education at first and then allowing them an opportunity to change their behavior.”

In addition to education, Molina suggested adding signage at beaches to notify the public of the potential ban, as well as campaigns to promote alternative foodware and container options or recycle old coolers and bodyboards.

Both bills will head to the full council for consideration.

The committee also unanimously backed a resolution that urges Hawaii’s congressional delegation to support amending the Solid Waste Disposal Act and support the Break Free from Plastic Pollution Act, which aims to reduce the production and use of certain single-use plastic products and packaging by keeping large businesses accountable.

The Surfrider Foundation was instrumental in supporting and helping to write the resolution.

“Our beaches are supposed to be filled with natural materials — coconut, driftwood, rocks, sand, life,” said Lauren Blickley, Hawaii Regional Manager of the nonprofit on Maui, who displayed a photo during her presentation of a local beach littered with trash. “What this act does is shift the responsibility of addressing the waste, reducing the waste away from our community members, away from our nonprofits, away from our children and the next generation, and begins placing that burden on our very large industrial corporations and plastic producers.”

The handful of testifiers at the meeting last week were all in support of the proposed changes, and the council members said they have not received any pushback from businesses.

Meanwhile, the Department of Environmental Management is planning changes to its administrative rules that would update the ban on “polystyrene foam food service containers” to apply to “plastic disposable foodware.” “Plastic” would mean any material made from petroleum or petrochemical compounds that are not compostable, as well as all forms of polyethylene, polypropylene and polycarbonate or petrochemical polymeric compounds and additives. The changes would also include removal of the exemption for foam coolers and ice chests.

Testimony can also be submitted to [email protected] mauicounty.gov or Department of Environmental Management, EPS Division, 2145 Wells St., Suite 103, Wailuku, HI 96793 and must be received by the department before the hearing closes on Wednesday.

* Dakota Grossman can be reached at [email protected]


Today’s breaking news and more in your inbox

Malama Maui Nui will host the next Go Green Recycling Event from 9 a.m. to noon July 17 in Lahaina, Maui County …

The Ukumehame Firing Range will close for maintenance and repairs from Monday to July 16 and from July 19 to 23, …