The cost of shipping goods into Nigerian ports is among the highest in the world, with the figure for Apapa port costing more than thrice of that to Tema, Ghana, according to new research by SBM Intelligence.

The organisation tracked shipments to three African ports between September and November 2019 and came up with the average cost of shipping goods in from the European Union, the terminal charges on containers while they are in those ports, and the average cost of local transportation from the port to selected warehouses within the port cities.

According to the research, the cost of shipment to Apapa is nearly five times that of Durban, South Africa.

“While each of the component parts of this dataset, shipping charges, terminal charges and local transport, are highest for Lagos, it is local transport, 10 times the cost in Lagos than in both Durban and Tema, that really makes Lagos an expensive place to do business in.”

Nigeria has six seaports – Apapa and Tin Can in Lagos, Onne and Port Harcourt in Rivers, Warri in Delta, and Calabar in Cross River, according to the Nigerian Ports Authority.

For several years, the cost of doing shipping business in these ports, particularly the ones in Lagos, has ranked among the highest in the world.

In May 2017, Vice President Yemi Osinbajo, who was acting president at the time, signed an executive order directing 24-hour operations at the Apapa ports and outlawing touting by official and unofficial persons at the ports. The order also barred agencies such as the Standards Organisation of Nigeria (SON) and the National Food, Drugs Administration and Control (NAFDAC) from operating within the ports.

The order was aimed at improving the ease of doing business and reducing the high costs at the ports, but maritime experts say sundry charges and extortions by government agencies and law enforcement officers at the ports continue till today.

Kayode Farinto, a freight forwarder, said regulatory agencies such as the SON and NAFDAC have now become revenue-generating agencies.

“The other one is the issue of the Nigeria Customs Service,” said Mr Farinto, the managing director of Wealthy Honey Investment Limited.

“A lot needs to be done about them because if you have a consignment, you cannot specifically say the exact amount you will pay as duty. Until you pay all these, you cannot take your containers from the port.

“Even when it is out, there are other Customs interventions here and there; about six task forces holding consignments and it’s not as if they are adding value but clear extortion.”

A PREMIUM TIMES’ check on some of the monies payable at the Lagos ports showed that numerous fees paid to sundry government agencies are non-receipted.

When a container is offloaded at the port, there is a Wharf Landing Fee of N1,000, if it is a 40-foot (N500 for 20-foot), payable to the Lagos State government and is receipted. 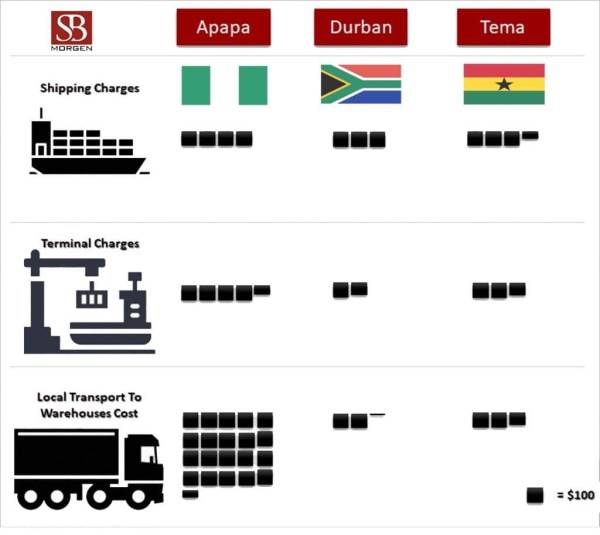 For an empty container to enter the port, the transporter parts with about N150,000, paid to a ‘Joint Task Force’ that includes officials of the police, navy, truck owners association. It is also non-receipted.

Sometimes, after a container has been ‘gated out’ from the port, Customs officials stationed outside impound the container for being undervalued and slam additional charges on it.

Naturally, the transporters transfer all the charges to the importers.

PREMIUM TIMES learnt that transporting a 40-foot container from Apapa to Ijora (a four-kilometre distance) is N600,000; Apapa to Signal Barracks in Mile 2, (about eight kilometres) is N630,000; while Apapa to a location in the South-East is, at least, N1.1 million.

While the shipping and terminal charges in Apapa cost about twice that of Ghana, local transportation costs nearly ten times more in the former.

Mr Farinto attributed the astronomical local transportation cost to bad roads. Last month, he paid N1 million to transport a container from Apapa to Kano. The fee is currently not less than N1.2 million, according to him.

“We have been talking about this issue for a very long time, clearing of consignment in Apapa is very expensive compared to other African countries,” said Mr Farinto.

A few years ago, Nigerian importers protested the huge cost of doing business by withdrawing their services at the ports.

But even such extreme measures did little to assuage the problem, according to Stephen Ibe, an importer, who participated in the protest.

“Instead of these operators to come to a round table on solutions, they will go behind us, lobby heads of the stakeholders, and at the end of the day, everything will be in futility,” said Mr Ibe, the managing director of Stephens Global Services Limited.

“The shipping companies and terminal operators are the ones perpetuating the crime of hike in doing business in the ports.”

Increase Uche, the national president of the National Association of Government-Approved Freight Forwarders, said they have been advocating for a reformed port system for decades.

“As at 2000, we foresaw the ports system degenerate to this level,” said Mr Uche.

“We made a proposal to the government, after which we met the Oba of Badagry to allow government establish a deep sea port in Badagry and the man accepted.

“So, we continued the advocacy but nothing came out of it. The only hope we have is government should ensure laws are promulgated, like the ports and harbour bill, and should give the Shippers Council more power of enforcement of policies.’

The Nigerian Ports Authority is a federal government agency under the Ministry of Transport, that governs and operates the ports in Nigeria. Its spokesperson, Jatto Adams, said regulating shipping rates is out of the agency’s purview since a visit to any port is derived from the serviceability and turn-around possibilities.

“Also, freight is not under our control as it is a relationship between shipping lines and consignees.

“It should equally be noted that NPA has very limited control over shipping regulations possibly due to reporting patterns of agencies operating in the maritime sector to diverse supervisory ministries.

“Not until the activities of various players in the industry are integrated to operate a single window (one-stop-shop) that we could see reduction in the cost of shipment into Nigeria.”

The Nigeria Shippers’ Council, another agency under the Ministry of Transport, is charged with the responsibility to protect cargo interests in Nigeria and act as the nation’s ports economic regulator.

Speaking on the high cost of doing business at the ports, Hassan Bello, the NSC’s executive secretary, said shipping charges would be reduced by 35 per cent by the second quarter of 2020 as the agency is concluding negotiations with shipping companies.

“After that, NSC will negotiate with terminal operators and government agencies, that would be in the third quarter and it would further reduce cost,” he said.