LOS ANGELES (CBSLA) — Dozens of families in the South LA neighborhood where a botched illegal firework detonation led to an explosion last Wednesday were still out of their homes a week later.

The City of Los Angeles Office of Emergency Management said Wednesday about 22 families were told they had to evacuate after the explosion and are expected to be able to return to their homes in the coming days.

“The night of the explosion they told my mom to stay inside. We got off of work and we weren’t allowed to go in,” said Marina Baltazar, who was locked out of her home in the days following the incident. “They told us if my mom got out she wouldn’t be able to go back in.”

The 26-year-old man arrested by Bureau of Alcohol, Tobacco, and Firearms agents in connection to the 32,000 pounds of illegal fireworks allegedly found in his homemade his first appearance in federal court Tuesday. 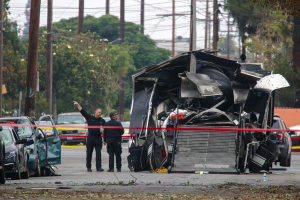 At the scene of a fireworks explosion that destroyed an LAPD bomb squad vehicle on June 30, 2021, in East Los Angeles. July 4, 2021. (Irfan Khan/Los Angeles Times/Getty Images)

Arturo Ceja was expected to be released from federal custody on an unsecured $25,000 bond signed by his parents, according to the U.S. Attorney’s Office. He is expected to be arraigned on Aug. 2.

Arturo Ceja was initially arrested on state charges after the June 30 explosion, but over the weekend, ATF agents took him into custody on federal charges. Ceja faces a criminal complaint charging him with transporting explosives without a license.

The federal complaint alleged that Ceja took several trips to Nevada where he purchased the firework and transported them back to L.A. in rental vans. Most of the explosives were purchased at Area 51, a fireworks dealer in Pahrump, Nev. The complaint notes that fireworks in California can be sold for as much as four times what purchasers pay for them in Nevada.

On June 30, after receiving a tip that fireworks were being stored in Ceja’s backyard, LAPD officers responded to his residence on East 27th Street. At the house, officers allegedly found more than 500 boxes of commercial-grade fireworks in large cardboard boxes. LAPD officials said Ceja’s 10-year-old brother was also at the home at the time of the fireworks discovery.

While trying to remove the fireworks from Ceja’s home, the LAPD Bomb Squad discovered that some of the fireworks contained explosive material. They decided that the explosive material was too dangerous to transport and placed about 10 pounds of it in a specialized armored truck known as a total containment device that is used to detonate dangerous material. When they attempted to detonate the material, however, a massive explosion occurred.

Some 17 people were injured and many residents in the blast zone suffered property damage so severe that they have been unable to return to their homes.

Ceja was initially arrested and booked on the day of the explosion on state criminal charges of possession of a destructive device and child endangerment and was released after posting $500,000 bond on July 1. Two days later, however, he was taken into federal custody pending Tuesday’s initial appearance before a federal judge in downtown L.A.

“What is going to happen with us?” said Berardo Becerra Tuesday, one of the explosion victims. “What is the next step? We don’t have a secure roof.”

Becerra and his family of 10 were left with several injuries and nowhere to go.

Becerra said he and his brother, who are both self-employed, lost their livelihoods when their vehicles were destroyed in the explosion, they told CBSLA Tuesday. Their elderly aunt suffered a broken nose.

The family is living in a motel after a homeless services organization stepped in to help.

If convicted as charged, Ceja faces a maximum sentence of up to 10 years in federal prison, according to the U.S. Attorney’s Office.

If you would like to contribute to a GoFundMe page to help the victims of the explosion, go here.