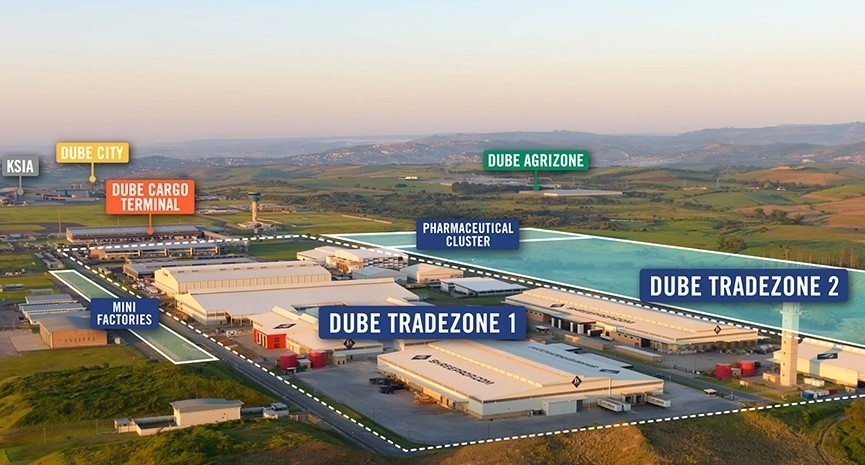 Durban is now connected to over 700 destinations around the world through its current airline partners operating from King Shaka International Airport.

January 27, 2020: King Shaka International Airport’s air cargo through Durban witnessed a 47 percent growth for the 2019 calendar year. Following the increased capacity in Durban’s airfreight market as British Airways operated three flights a week to London and Qatar Airways introducing a larger A350 on the Durban-Doha route, as well as Emirates introducing an additional four flights a week from mid-June to early August 2019 in response to the growing, passenger demand for travel during this period.

Over the first three quarters ending December 2019, King Shaka saw both international and domestic passenger numbers grow by 7.5 percent and 7.4 percent, respectively, exceeding the average growth rate for the region.

Hamish Erskine, CEO Dube TradePort Special Economic Zone and co-chair of Durban Direct noted, “The overall passenger numbers show that there has been an additional 63,000 more passenger’s that have flown into Durban compared to this time last year.

“This growth is a direct result of intensive collaboration with our airline partners and tourism authorities, provincial and local government as well as other members that form part of Durban Direct initiative that is responsible for facilitating the establishment of new regional and international air services to and from Durban.”

Since establishing the route development programme in August 2014, Durban Direct has successfully secured six new routes in the last six years. Durban is now connected to over 700 destinations around the world through its current airline partners operating from King Shaka International Airport.

Phindile Makwakwa, acting CEO KwaZulu-Natal Tourism and co-chair of Durban Direct said, “Durban Direct has been running a successful marketing campaign in partnership with British Airways in the UK and other tourism markets like Germany and France, increasing the visibility of KwaZulu-Natal as an attractive tourism destination.”

The number of passengers arriving and departing during December last year through King Shaka International Airport near Durban grew more than 11 percent compared to the same period in 2018, making it the fastest-growing airport in South Africa.

The airport facilitated the journeys of more than 616 000 passengers arriving and departing during December last year, up from 553,000 for the same period the previous year.

“Most airlines operated at near to full capacity during the peak holiday month as both international and local visitors flocked to Durban for the end-of-year break,” said Terence Delomoney, King Shaka International Airport general manager.

“The growth in passenger numbers reflects not only the increasing attractiveness of Kwa-Zulu Natal as a tourist destination but that flying directly to their destination has become more affordable and convenient for more visitors. We are proud to say that December 2019 yielded the highest passenger volumes for the first time in its history, of which 93 percent of total pax were domestic travellers.”

Delomoney said the growth in international traffic was the result of several international airlines operating direct routes to Durban from major cities such as London and Dubai. It also indicates that the domestic airlines were at capacity to ensure passengers had more choices for local destinations including Durban. With Durban being an events destination with sport, the conference, and music added to the destination of choice for people traveling to Durban and KZN.

As part of this MoA, the parties have committed to the development approach (for their respective landholding within the Northern Development Area) that builds resilience into their spatial planning and infrastructure development.

In line with the framework, Dube TradePort Corporation is now prioritising the acquisition of land parcels that possess critical biodiversity assets such as grasslands and wetlands. This is particularly premised by the understanding that grasslands and wetlands account for approximately 65 percent of the terrestrial and aquatics carbon stocks. “For instance, of the total 800 hectares of land purchased from private landowners between 2014 and 2018, approximately 200 hectares is being used as wetland mitigation offset, thereby contributing to the climate change resilience of the Northern Development Area,” said Erskine.