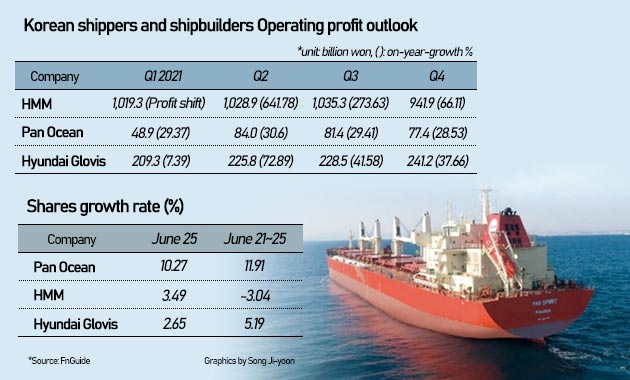 Shares of South Korean shippers, both sea container and bulk carriers, turned northbound ahead of the second-quarter earnings season amid soaring shipping rates.

The summer rally owes to jump in freight rates.

The Baltic Dry Index (BDI), which tracks rates for capsize, panama and supramax vessels ferrying dry bulk commodities, hit 3,255 Friday after touching 3,267, the highest in 11 years. The index that had continued its rise since the beginning of the year crashed nearly 25.9 percent from May 5 to June 8 on concerns about Beijing’s regulation on steel output.

The Shanghai Containerized Freight Index (SCFI), widely cited metric on market freight quotations, soared to the highest of 3,785.4 as of Saturday since related data started compiling in October 2009.

“Pan Ocean has expanded its fleet of bulk carriers to 231 from 186 in December. It is expected to report 97.5 billion won in operating profit in the second quarter, well above the market consensus of 84 billion won,” said Hwang Uh-yeon, an analyst at Shinhan Investment Corp.

Hyundai Motor Group’s logistics unit Hyundai Glovis shares also rose 2.65 percent to close at 213,000 won on Friday with its earnings outlook revised up recently. NH Investment & Securities has upped its earnings estimated for the company – operating profit up 4.5 percent and revenue up 3.8 percent.

“Hyundai Glovis’s operating profit is estimated to reach 237.2 billion won, slightly higher than the market consensus of 225.8 billion won in the second quarter thanks to profit improvement amid surging freight rates,” said Jung Yeon-seung, an analyst at NH Investment & Securities.

HMM shares, however, has been trading in a boxed range as the stock price has already tripled this year. The shares that peaked at 50,600 won on May 27 plunged 17.79 percent in a month, with some of the losses pared on Friday.

HMM’s price per earnings ratio or PER, which measures the stock price against a company’s earnings per share, is estimated at 4.63 times, hovering much below the ratio of industry peers – 16.68 times of Pan Ocean and 11.72 times of Hyundai Glovis, according to Seoul-based financial data provider FnGuide.

By Moon Ga-young and Lee Ha-yeon