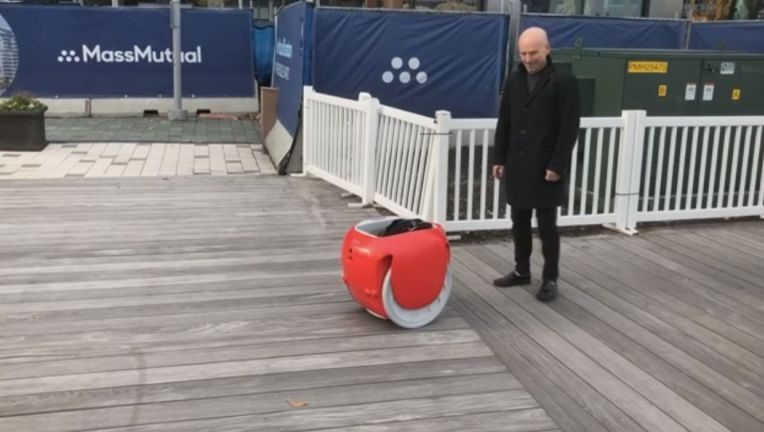 Gita the robot is shown in Italy.

Gita the robot obediently followed one of its creators in a recent demonstration.

It can be turned on and off with the push of a button.

Corporate giants like Amazon, FedEx and Ford have already been publicly experimenting with sending delivery robots to doorsteps.

Now Piaggio, the Italian maker of the Vespa scooter, is offering a consumer version – albeit one that weighs 50 pounds and costs $3,250.

It’s named the Gita after the Italian word for a short, pleasurable excursion.

Its creators have such trips in mind for the “hands-free carrier” that can hold produce and other objects as it follows its owner down a sidewalk.

“Gita is a mobile carrier, it’s a robot and it enables you to make pedestrian mobility choices: Instead of reaching for the keys to the car, you can go out for a walk with Gita,” says Jeffrey Schnapp, the co-founder of Piaggio Fast Forward, a subsidiary of the Italian automaker.

A pedestrian walking by takes interest in the Gita, which swerves around, keeping in pursuit as she switches directions.

Get breaking news alerts in the FOX5NY News app. It is FREE!

The Gita doesn’t require a phone or intrusive people-tracking technology such as facial recognition or GPS.

It locks on to people using cameras and sensors and then tracks them, according to Schnapp.

The startup’s chief executive, Greg Lynn, says the aim was to get people away from their screens and out into the real world.

“After a year and a half of research and design, we decided to focus on helping people be pedestrian and outdoors rather than giving them another thing to ride on, but something to walk with,” he says.

Other startups like Starship Technologies have a more conventional business plan for their own delivery robots.

The company charges a delivery fee starting at $1.99 if you order its rovers to bring you a Starbucks coffee or a takeaway lunch.

So far, the best habitat to find Starship’s six-wheelers in the wild are relatively confined spaces such as college campuses; the University of Houston and the University of Wisconsin-Madison rolled them out this fall.

The robots, which look kind of like oversized ice chests on wheels, can carry up to 20 pounds.

“I love them, I think they’re so cute,” says University of Houston freshman Sadie Garcia as one of the machines rolled up with a bagel sandwich she’d ordered.

She says she was so cold she didn’t want to leave her dorm.

The San Francisco startup once looked at selling the machines directly to consumers but dropped the idea after realizing it would have to price them at more than $3,000.

Amazon is experimenting with a similar-looking machine that delivers retail goods in a handful of US neighborhoods.

FedEx is testing its own delivery rover in partnership with Pizza Hut, Walmart, Target and Walgreens.

So far, none are as far along as Starship, which has hundreds of its machines already in service.

Forrester technology analyst J.P. Gownder is bullish about delivery robots of the Starship variety because their autonomy will help save labor costs, though he says it’s still an open question whether ground-based rovers or aerial delivery drones will prove more successful.

“So, I think what people can expect from the immediate future of physical robotics is that they’re not going to look like what we have imagined in the movies. They’re not going to be humanoid devices that look exactly like people or even animals. The idea is to solve a problem, whether it’s for a consumer or for a business. And that could mean anything from something that doesn’t look like a robot at all that’s just a voice, like Alexa; to something that is mechanical in nature, but that is doing it very, very simply.” he says.

Both types of cargo robots still have significant limitations.

Customers also have to check a phone app to tell the vehicle where to go and to unlock the bin once it arrives.

The Gita, meanwhile, might still be impractical for many people.

It favours paved environments that are dense enough to have stores in walking distance, but not so dense that the machines get lost in the crowd.

And anyone who is simply looking to pull home groceries without heavy lifting can find durable wagons online for less than $100.

But its creators remain optimistic.

“We expect a very wide range of people to be interested in Gita. From young families that move around the world with all their kids’ toys to people going for a five-block trip to the local grocery store, to people going out to parks and having picnics,” says Schnapp.