The many industries that make up the world of freight have undergone tremendous change over the past several decades. Each Friday, FreightWaves will explore the archives of American Shipper’s nearly 70-year-old collection of shipping and maritime publications to showcase interesting freight stories of long ago.

The following is an excerpt from the March 1966 edition of the Florida Journal of Commerce magazine, which over the years grew into American Shipper. FreightWaves acquired American Shipper in July 2019.

Click here to view the entire edition of the Florida Journal of Commerce – March 1966.

The arrival this month of the Douglas-made Saturn IV B missile at Port Canaveral places the manned moon effort in the realm of near reality, and places the overall program on a definite schedule.

Saturn IV B, the second stage of the moon craft, arrived at the Port Canaveral wharf aboard a specially constructed barge, the USNS Point Barrow, and was transferred to a second barge that carried it through the Canaveral lock to the Vehicle Assembly building at the National Aeronautics and Space Administration Kennedy Space Center, where it is undergoing tests for launching later this year.

The USNS Point Barrow departed Sacramento in January and made the fifteen day trip to Point Canaveral with a complement of four engineers aboard. Engineer Bill Walford, assistant branch chief of criteria development and transportation, and his crew were met at Port Canaveral by an 18-man team of Douglas engineers under the supervision of Frank Mahone, supervisor of Environmental Control and Stage Handling. This was the second SIV B configuration to arrive at the Port by barge. The first arrived late last September 19 and has been undergoing tests and checkout and is scheduled to be launched February 22.

The February flight of the two-stage Saturn carrying an Apollo spacecraft, designed to carry three men on later missions, marks a definite step toward the moon project. The Apollo Spacecraft made its debut on this suborbital flight.

With ten successful Saturn launches behind them, five with one stage (made by Chrysler) and five with dummy second stages, the February 22 launch marks another step towards the moon and NASA officials and contractors of various components say the program is definitely on schedule.

This is the first of at least two unmanned missions for the Saturn-Apollo hardware that is tentatively scheduled for launching a three man Apollo crew later this year into orbit.

The Apollo, on its maiden voyage, will be rammed back to earth from the suborbital flight at 18,750 miles per hour for a special heat shield test. Later when astronauts return from the moon the heat shield will protect them at 25,000 miles per hour. 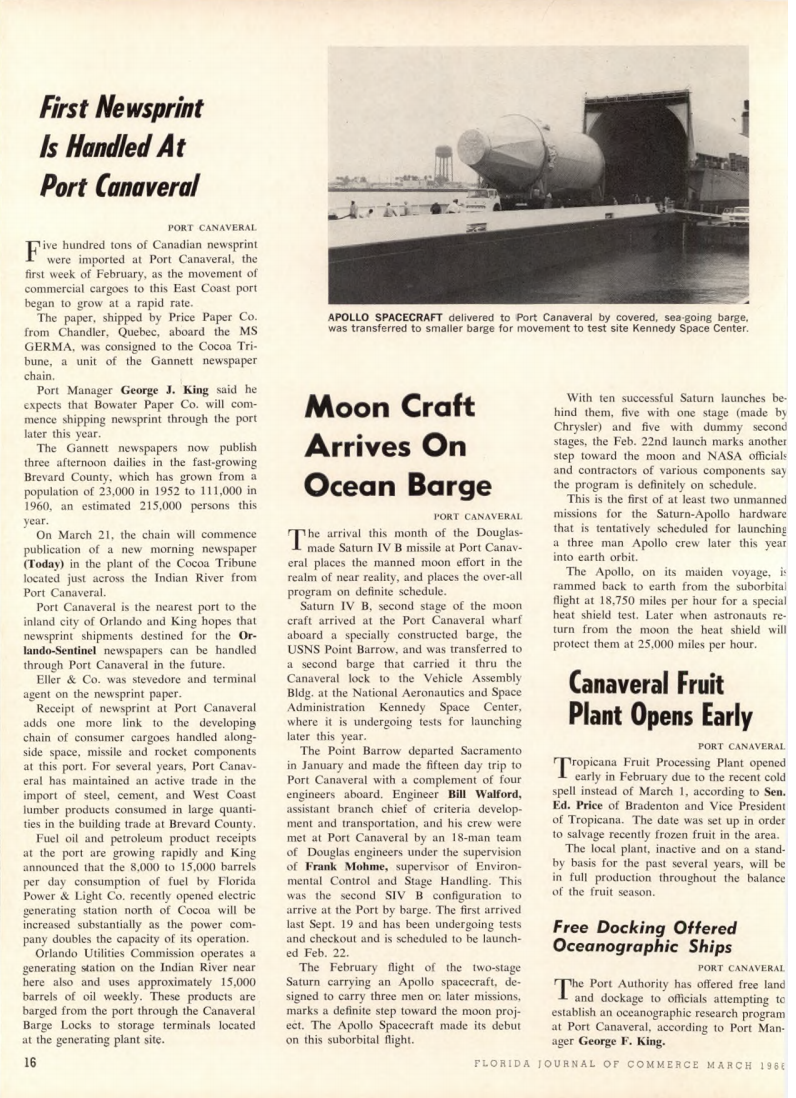