Of the 350 corporates and 150 investor bodies with the world’s highest involvement in supply chains with high deforestation risks, around half have not publicly committed to eliminate deforestation from their value chains. 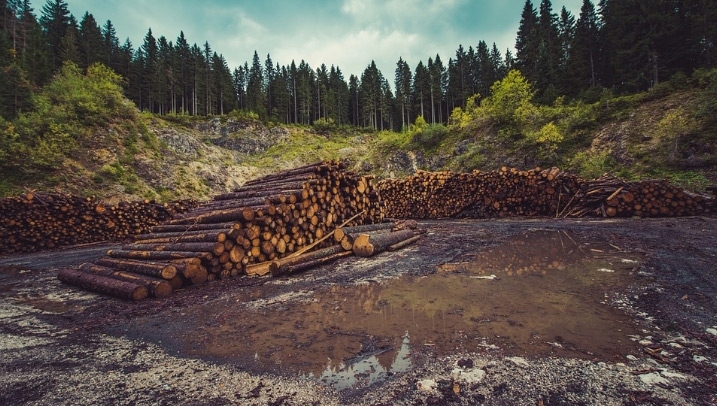 Companies assessed have sizeable links to the world’s six most at-risk supply chains, in regards to deforestation.

That is according to a damning new report from NGO Global Canopy, which assesses large companies sourcing six globally traded commodities with links to deforestation – palm oil, soy, beef, leather, timber and pulp and paper – as well as their investors.

The organisation’s latest Forest 500 report, published today (12 February), states that 242 of the 500 analysed firms have not yet made a public commitment to tackle all deforestation in their supply chains.

Capri Holdings, the parent firm of Versace, Michael Kors and Jimmy Choo is also named in this cohort, alongside BlackRock, Vanguard, State Street and Fidelity Investments. Global Canopy estimates that the investors in this group collectively manage $17.6trn of assets.

Of the remaining 258 firms, Global Canopy states, the majority have “presented no evidence” that they are taking action in line with their commitments. It urges firms including Nike, Walmart, Carrefour, General Mills and Yum! Brands – the parent firm of Taco Bell, KFC and Pizza Hut – to report annually on progress to tackle deforestation.

Moreover, the report accuses many of firms with commitments of “backsliding” – either weakening commitments or making progress towards their goals initially before lagging behind.

It states that of the 157 firms to have originally signed a pan-industry declaration to end deforestation by 2020, seven have dropped the commitment entirely and 18 have changed the deadline. This assertation from Global Canopy echoes recent research from CDP, which found that broad failures to deploy ambitious forest and land-use practices mean the 2020 pledge won’t be met overall, despite strong action from a handful of corporates.

“While some companies have shown real leadership on ending deforestation, overall progress has been painfully slow and this highlights that voluntary commitments by the private sector alone cannot be relied upon to drive change,” report author Sarah Rogerson said.

“The devastating scale and impact of tropical deforestation is evident to all and there is no longer any excuse for companies and institutions to plead ignorance.”

edie has contacted the companies named above as having no public deforestation commitments for a response to the report.

As of the end of the working day on 11 February, Tyson Foods was the only non-financial business to provide a response. A spokesperson said the firm is working with Global Canopy to digitally map its supply chain, and separately, with Proforest to conduct a deforestation risk assessments of all direct operations and suppliers globally. The risk assessment will inform the development of a company-wide Forest Protection Policy, the spokesperson added.

From the finance sector, BlackRock emphasised its procedures for engaging businesses it backs with sustainable agriculture, and its position statement on environmental and social stewardship via investments. Vanguard, meanwhile, highlighted its membership to the UNs Principles for Responsible Investment, with a spokesperson stating: ““Vanguard’s Investment Stewardship team spends a considerable amount of time assessing and engaging with companies on a wide range of ESG topics.”

As for Fidelity International, the company recently made sustainability within the palm oil industry one of its core sustainable investing priorities, a spokesperson told edie.

“In 2019, we engaged with various companies along the palm oil production value chain; increased our due diligence with various stakeholders across the industry; encouraged better transparency and disclosure with focus companies; and engaged with the RSPO regarding new policies and their procedures and grievance policies,” the spokesperson said.

“This year, we will continue to expand our engagement activities, with a focus on Indonesian and Chinese companies and regulators, and explore further collaboration with NGOs.”

Global Canopy said in a statement that one positive of the missed 2020 deadline is that it should “governments and consumers to increase pressure on [companies and investors] to prove that they are taking real action.”

These comments echoed those made by former UN climate envoy Mary Robinson at last week’s Sustainability Leaders Forum. Robinson told of how, amid a backdrop of public and investor climate activism is forcing governments to bolster green legislation, companies are being “squeezed” from the top-down and bottom-up.

Global Canopy is specifically urging governments to implement better due diligence legislation requiring companies to assess, prevent, mitigate and report on deforestation risks in their supply chains and operations.

The EU recently considered a Communication on the Adoption of Stepping Up EU Action to Protect and Restore the World’s Forests, for example, as part of its Green New Deal development.

The Communication has kick-started procedures to assess and implement new measures to redirect finance to forest conservation and restoration and to change trade agreements to ensure the bloc is not relying on deforestation-linked commodities from elsewhere.

Global Canopy sees the Communication as “a clear signal” that stronger forest legislation is, and should be considered – particularly in the wake of forest fires in Amazonia and Australia and in light of new scientific research on land-use’s connections to climate change.