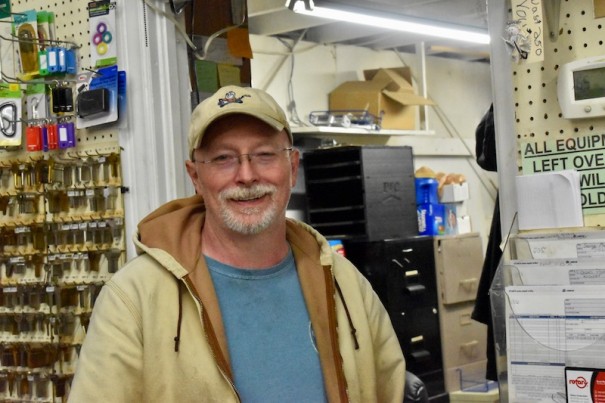 HORSE SHOE — If you visit Horse Shoe Hardware for the first time and you’re greeted by a cheery “hello” and you see no one, you haven’t lost your mind. You just failed to notice Java, the store mascot.

A 48-year-old African gray parrot, Java sits in her cage behind the counter, occasionally talking.
“‘Are you hungry?’ is her favorite,” says Dustin Hamilton, one of the three employees of the store. “We hear that all the time.” She also says hello and thank you and if that sound like a friendly bird, well, a sign on her cage warns that she will bite. People are satisfied to look, not touch. “She seems to be most of the time the main attraction,” Dustin says.
Java is one of the things that has stayed the same at Horse Shoe Hardware while other things are changing, sort of incrementally.
When Dwane Byrd and his wife, Melinda, bought the store in September, they completed a circle that goes back 40 years. Dwane worked at the store in high school and went to AB Tech to learn small-engine repair before hiring on at the G.E. plant in East Flat Rock. Melinda worked at the hardware store when the Briggs family owned it. She and Dustin, her cousin, are related to Jerry Hamilton, who sold the store to the Byrds.

“I’m within five years of retiring from G.E. and this became available,” Dwane says. “I met my wife here 26 years ago. She was working here then. We’re just trying to get the word out that we’re here to serve the community and help out.”
A 1982 graduate of West Henderson High School, is in charge of maintenance at the G.E. plant. After he knocks off from his day job, he relieves Melinda at the hardware store until closing time.
The store is old-fashioned, in a good way. Dustin, Dwane and Melinda know where everything is and can walk the customer to it. You can buy one lag screw when you need only one, and not package of six or a dozen. And Dwane fixes everything that runs.
In the rural area around Horse Shoe, “you’re 20 minutes away from any big box store,” Dwane says. “We try real hard to keep stuff a handyman, homeowner/do-it-yourself person needs. You get in and out real quick. We’ve got fair prices and we’re getting in new stuff.” Under the previous ownership, he acknowledges, the shelves had gotten “pretty bare.”
The store specializes in Case knives, custom-made Oregon chainsaw chains, ice melt, snow shovels and sleds and repair of lawnmowers, chainsaws, generators, leaf blowers and other equipment (with pickup and delivery). Hamilton and the Byrds seem to know most customers who walk in.
As for the others, “We’re easy to get to know,” Dwane says. “We’re friendly folks. We’re trying to help everybody out. So far it’s working pretty good. One thing I’d like to stress is the appreciation me and my wife have for the people supporting us.”