How Thiruvananthapuram cleaned up its act

Thiruvananthapuram, the capital city of the state of Kerala, has shown how decentralised waste management is the answer to minimising waste creation.

In 2011, the city was in the eye of a storm when its only municipal landfill at Vilappilsala was forced to shut down, following local protests over the mismanagement of waste at the site.

The model has brought rich dividends to the city and offers an excellent lens to understand the implementation challenges, politics of priorities, and the roles of different stakeholders in the road towards zero waste.

How did they do it?

Thiruvananthapuram, with a population of approximately 0.9 million, is spread over an area of 214.86 square kilometres and is divided into 100 wards.

Following the 2011 protests, the TMC introduced segregated collection of waste to ensure maximum efficiency. It formalised and institutionalised source-level composting and decentralised resource recovery as part of city waste management.

The entire process of waste management in the city now is based on the principle of proximity which ensures the least amount of displacement of waste. Bulk generators or commercial establishments, meanwhile, are required to take responsibility for their own waste.

Bulk generators include hotels, restaurants, commercial establishments, community halls, and institutions. For residential flats and gated communities, the TMC offered a 50 per cent subsidy for setting up organic waste management in situ. For low-value non-recyclables such as laminates, households are encouraged to drop them off in TMC collection centres.

According to TMC officials, presently, 1,25,000 households (50 per cent of the total households in the city’s 100 wards) as well as 350 bulk generators compost their wet waste.

Close to 100 bulk generators and 4,000 households have set up biogas plants for in situ treatment of waste. These plants have been placed in the households at zero cost.

The technologies used for composting in households are pipe, kitchen-bin and pot / bio composting. For communities, aerobic bins are used.

Many of the bulk generators use organic waste converters for composting as well. This diverts 67 per cent of the waste from the city’s landfills (see below). 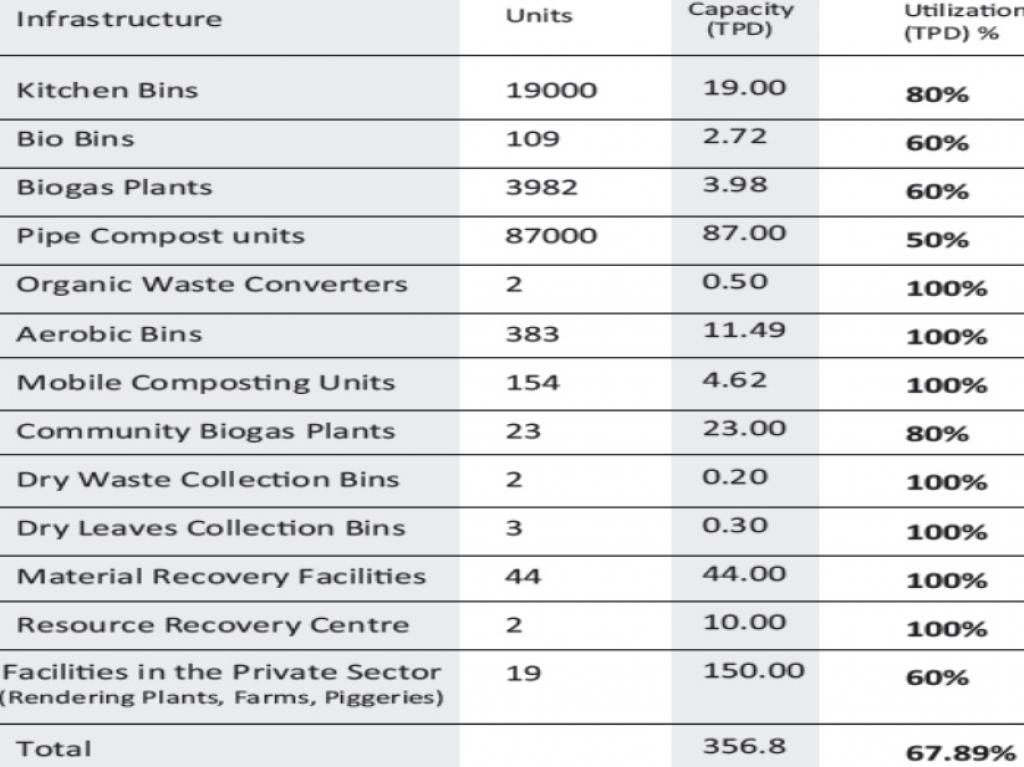 The strategy of sector-wise waste management has been a novel and practical idea implemented successfully by TMC, Shibu Nair, India coordinator of Global Alliance for Incinerator Alternatives (GAIA), said.

TMC also organizes periodical collection drives for specific types of non-recyclable discards. The materials will be sent to the authorized recyclers.

TMC runs a resource recovery centre which is operated by Clean Kerala Company, a state-owned enterprise that processes low-value plastics for road construction and recycling. The agency is also responsible for managing and processing electronic and domestic hazardous waste.

Further, the Anti-Littering Enforcement Team (ALERT) launched by the civic body ensures that citizens do not litter public places or water bodies. The team functions 24 hours under the watchful eyes of a patrolling squad which comprises officials belonging to the corporation’s health wing.

The public is also empowered to alert the squad if they come across instances of waste dumping at night. The information about the solid waste management (SWM) service delivery is also made available to the citizens through the Smart Trivandrum application.

Besides providing periodical alerts on collection of segregated dry waste, the app also helps users locate the SWM infrastructure such as the nearest material recovery centre or community composting/biogas plants.

Today, Thiruvananthapuram generates about 350 tonnes of waste per day. Out of this, about 49 per cent is from households, 11 per cent from commercial centres, 10 per cent from hotels and restaurants, and the rest is from other segments.

About 83 per cent of the total waste generated in the TMC is compostable, 11 per cent consists of inert, seven per cent forms paper, five per cent makes for plastics and the rest comprises other dry waste.

T’puram, a pioneer on zero waste

The TMC’s waste management plan was not the first of its far-sighted measures to manage waste. It brought in the green protocol for the first time in India to tackle plastic pollution.

The protocol was first practiced at an international workshop on zero waste in Kovalam in 2000. Many institutions have adopted this initiative, including the state legislative assembly complex in the city.

Attukkal Pongala, a religious festival where over four million women congregate in the city, has enforced the methods of the Green Protocol, Nair added.

So what is Green Protocol? It is essentially a set of measures, which when implemented, results in a significant reduction of waste.

He added that TMC had succeeded in ensuring public participation in its SWM programme, and had excellent institutional mechanisms and stakeholders including elected representatives, officials, volunteers and private entities.

“All these make TMC a pioneer in decentralised SWM,” Nair said.

This is the fifth of a 10-part series

We are a voice to you; you have been a support to us. Together we build journalism that is independent, credible and fearless. You can further help us by making a donation. This will mean a lot for our ability to bring you news, perspectives and analysis from the ground so that we can make change together.