Shaken, not stirred.” We all know James Bond’s preference for martinis. Simple enough, but there was more to the story. Bond insisted on a precise mix of vodka, gin and dry vermouth garnished with a lemon peel. Sounds good but seems to border on advanced mixology.

Coincidentally, your maintenance scheme for materials handling equipment follows a similar path. It would be nice if “shaken, not stirred” translated easily to “in-house, not contract” or “contract, not in-house.” But the decision-making process is not quite that simple or straightforward.

“It really depends,” is the definitive statement from Michael Felbinger, vice president of customer service at Swisslog. While he apologized for his “lawerly” reply, he didn’t have to. In speaking with suppliers of several different types of materials handling equipment, “it really depends” is very much the right answer to the question for going in-house or contract for maintenance.

Several factors should be considered when deciding what is best for your operation. These include equipment complexity, staffing, skills and culture, to name a few factors.

Cost is also a consideration. However, it is also the toughest of the bunch to pin down precisely since it really is a facility-by-facility decision. So, we won’t delve into the relative or specific cost of the approaches here. But do keep in mind, you should have a favorable return on investment for the path you follow.

As to details about how to best manage spare parts (that’s yet another in-house vs. contract decision), see the story on pg. 12.

Unless your company is a startup, you already have an approach to maintenance. Beyond in-house and contract, it could even be a blend of the two. At the highest level, at least, you probably have a good idea of how well your in-house or contract scheme is working.

Since MRO costs are tracked today like never before, management knows how cost effective your approach is. Furthermore, the operations people can tell you, at least anecdotally, how well your maintenance approach supports their daily metrics.

Assuming all is working well, there’s no real need to reassess. Right? Sorry, but that would be the wrong response. And, it would be especially wrong if you are adding equipment with greater complexity, bringing in automation or lift trucks for the first time or opening a new facility.

“Most companies live in the here and now,” says Conveyco’s vice president of operations Larry Jones. “In fact, they should be looking at now as well as 18 or even 30 months from now when it comes to maintenance,” he adds.

Jones continues to say that “the best leaders make decisions on what they are trying to accomplish and the impact it will have on the overall business. They are also focused on running the business. They don’t expect it to just run.”

That is especially true for the in-house or contract maintenance decision as conditions at the company and its facilities change over time.

The general rule of thumb is the more complex the equipment, the stronger the case to consider or adopt contract maintenance. It’s true regardless of the equipment.

So much inventory to fill orders and so little time for equipment downtime.

Over at Yale Material Handling, director of parts sales Tracy Minto says a fleet of non-specialized lift trucks can easily be managed by an in-house maintenance team. But as new, more sophisticated trucks enter the fleet, contract maintenance deserves a look. In that case, the technology built into the trucks could well be beyond the capabilities of the staff in place. That is not an uncommon occurrence.

Anthony Branch, director of product service and support at JBT, says the addition of guided vehicles to a lift truck fleet changes the maintenance dynamic. “For instance, the team in place may not have the electrical skills to maintain the new AGVs,” he says.

Building on that pyramid, an automated goods-to-person system with robotics, for instance, requires a different level of maintenance expertise than those needed for lift trucks or conveyors. That’s according to Hedges at OPEX. “More sophisticated automated equipment requires a unique expertise and level of skill, and that usually leads to a contract maintenance arrangement,” adds Hedges.

As Swisslog’s Felbinger explains, “some techs are best with mechanical systems. Others are better at electrical or software. The skills needed depends on the equipment in place or being introduced to the facility. And, equipment complexity is more important than size of the system or fleet. As you move up the complexity ladder, contract maintenance becomes a better choice.”

The problem, Felbinger adds, is if an in-house team is already in place. “In these cases, most companies don’t make the right decision. They usually go with in-house maintenance. They figure the current techs can handle the new equipment. That typically leads to a rough start for an automated system.”

At this point, it’s starting to look like there is no hard and fast standard to decide when to go with in-house or contract. Fact is, a blend of the two is often the right approach. It could be for a short time or for longer, but a blended approach is increasingly common.

“In some ways, blended is the best approach,” says Minto. “It can be the best of both worlds for trucks where it’s possible to use an in-house team to control travel and expenses on scheduled maintenance items that don’t require a high-level skill set. Bigger jobs that require more specialized skills are suited to contract maintenance. Furthermore, the specialized skills of contract techs ensure the parts changed out are the right ones to fix the problem.”

Jones typically recommends a blended approach for a new system, especially for highly mechanized and automated ones. But there are challenges, he adds.

“A blended approach can really challenge the culture of the place,” says Jones. “If you have in-house techs who are trying to keep a piece of a system just so they look good, that is a less than an ideal situation. To bring in contract maintenance to any degree, you need an open, partnering, non-adversarial culture. Otherwise, you’ll never get the full benefits of contract maintenance.”

Both Felbinger and Hedges point out the value of highly trained supplier techs for automated equipment. While both generally prefer a contract approach longer term, Felbinger sees the value of contract in different situations.

For instance, he recommends contract techs for a major system startup. It might be for a year or even as long as three years if the ultimate objective is to maintain the system in house. “During that time, the contract techs not only help smooth out startup and get the system into an operational rhythm, but they act as mentors for the in-house team as it learns the system,” says Felbinger. “That’s a huge benefit to the in-house team that they can’t find elsewhere,” he adds. 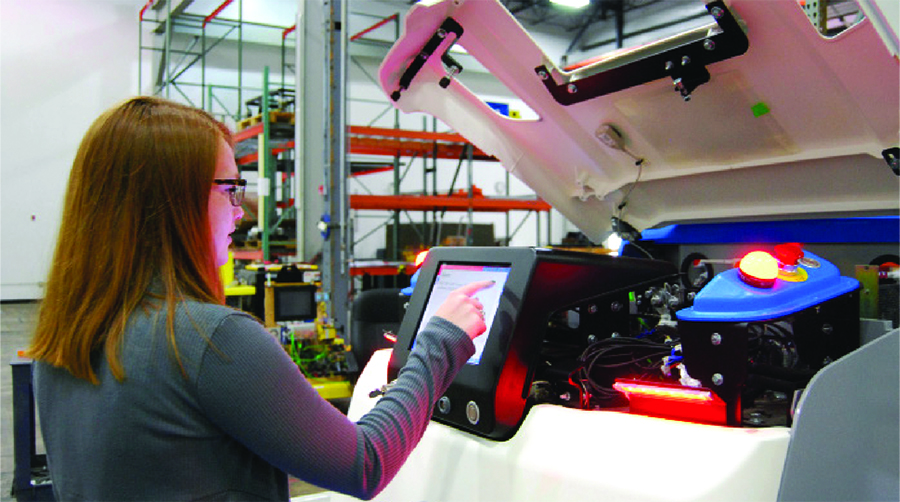 The more complex the material handling equipment, the stronger the case for contract maintenance.

No doubt, the in-house or contract maintenance decision is a complex one with many different factors. Not the least of which is culture, which Jones mentioned earlier.

“Systems that operate best have a true champion that holds ownership of the system,” explains Glenn Zetterberg, JBT’s product service and support sales manager. “Too many people bring in automation and think it just runs itself. It doesn’t work that way. That’s why a champion for either an in-house or contract team is so important.”

Similarly, it’s always good to identify who on the in-house team understands the entire system, says Jones of Conveyco. These are the people, he says, who are best to mentor. And that mentor can be a contract team that will be there short term or in-house management. “The techs are not just maintenance, they impact how the entire facility operates,” says Jones.

“Training and mentoring an in-house team generally delivers higher equipment performance and a faster ROI,” says Felbinger. “It’s a matter of turning equipment into a system that becomes a long-term solution,” he adds.

There are also several warning signs that the current arrangement is not working. For instance, it’s not good if the in-house team is a collection of firefighters. “If that’s the case, they are only treating the symptoms not the root cause of problems with the equipment,” says Jones. Other warning signs include inadequate skills and lack of appreciation that the operations people are the ultimate customer.

But above all else, a tight relationship between any maintenance team and the operations people and management is critical to making it all work, says Hedges.

Companies mentioned in this article: