Back in the 1960s, the Los Angeles Department of Water and Power (LADWP) began using helicopters to patrol its transmission infrastructure spanning California, Utah and Nevada. Federally mandated climbing restrictions were the driving force behind a new program at LADWP — human external cargo (HEC).

LADWP has been using the long line method to transport tools and materials to transmission crews for years. Following the changes in fall protection and tower climbing, LADWP began exploring the short haul, or external rope, method to transport linemen from the ground to a transmission line or tower. In the HEC method, a short haul line is used to connect the linemen, who are wearing harnesses and sometimes sitting in specialized chairs, to the helicopter.

The utility launched the program in less than four years with training from Air Rescue Systems (ARS) and support from the Joint Training and Joint Safety Institutes, Power System Safety and IBEW Local 18. 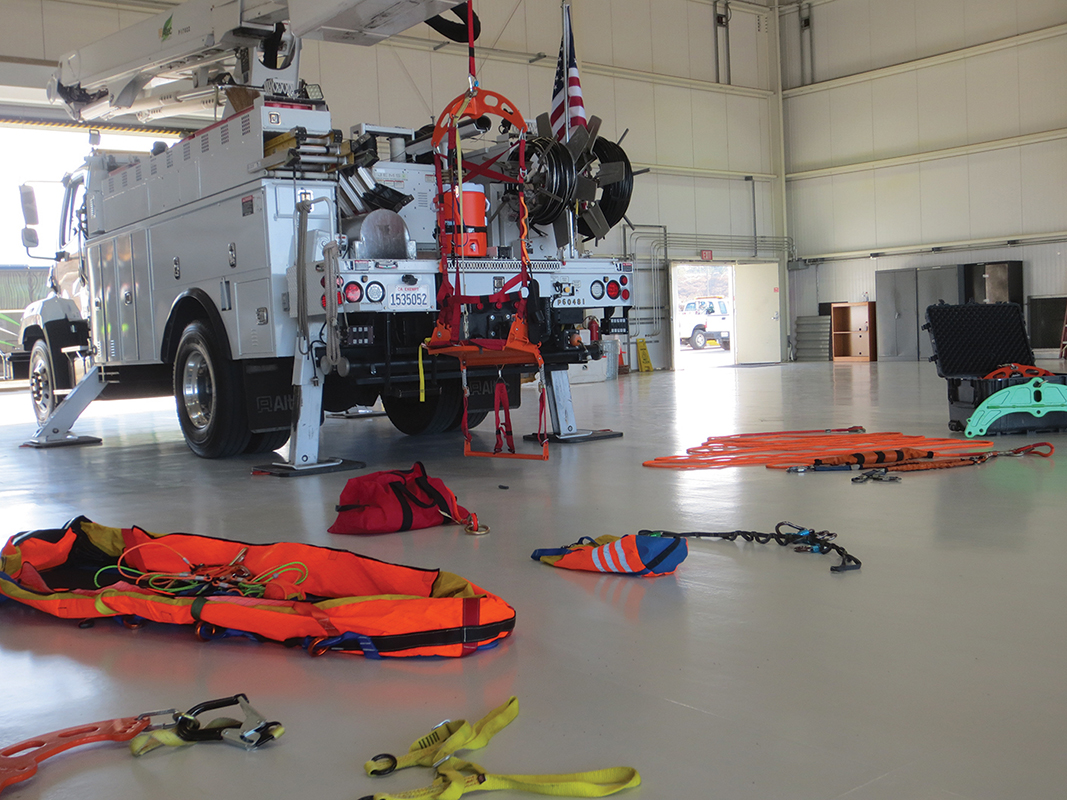 To launch its new program, LADWP invested in the necessary equipment including rescue vests, harnesses, Air Chairs and specialized ropes. 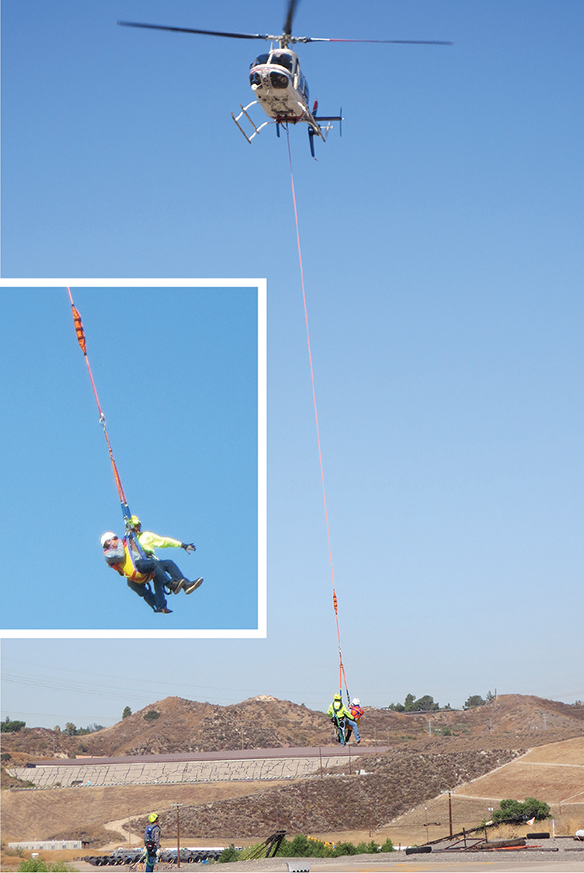 LADWP demonstrated its HEC and rescue techniques at the TDMMA 2019 conference in late August.

Within the on-site hangar, LADWP can not only house its helicopters, but can also provide training for long line and short haul HEC operations. The utility continually trains linemen and pilots in the HEC method at their Truesdale Training Center and at Hokinson Heliport, where a new transmission tower was constructed. As a result, the pilots can practice inserting HEC qualified personnel onto a tower and also in the wire environment to perform a particular task.

Twenty-eight journeymen linemen, five foremen and four pilots are now trained in HEC training methods. Since last October, pilots and linemen have worked together to inspect and maintain LADWP’s 3,500 miles of transmission lines.

To volunteer to serve on the HEC crew, the journeymen linemen completed nine days, or 90 hours, of rigorous training. During these training sessions, which included both classroom and hands-on instruction, linemen learned more about the operating characteristics of the aircraft being used, performed tower transfers, and flew in double and single Air Chairs. Linemen also practiced installing marker balls, installed insulators and travelers, line dampers and patch rod. 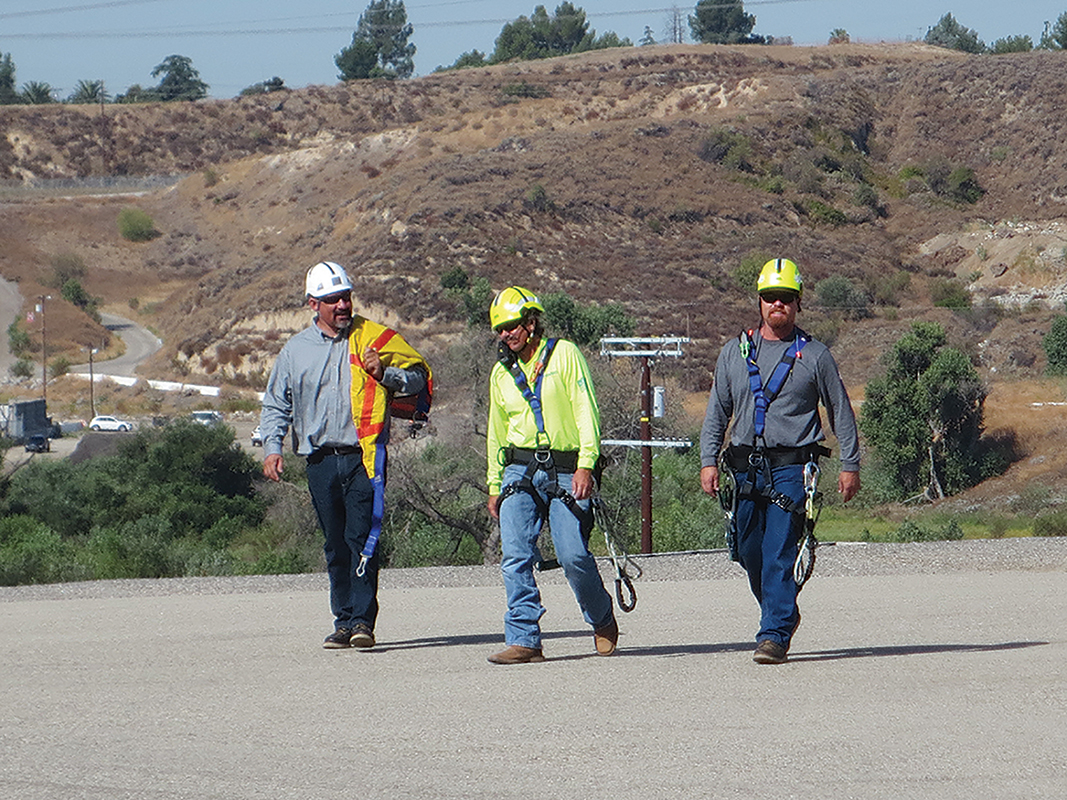 Jim Schultz (center) and his team were trained in the HEC method by Air Rescue Systems.

LADWP has discovered that the HEC work method reduces journeyman fatigue by allowing the linemen to be transferred from tower to tower instead of climbing every structure.

“One of the benefits of HEC is there is a lot less stress and fatigue on personnel to climb with all of the federally mandated climbing restrictions,” said Jim Schultz, electrical distribution mechanic supervisor for LADWP.

The most significant benefit, however, is the tower rescue portion of the HEC program. As part of their training, the linemen learned new techniques to safely rescue a fallen worker off a structure using a rescue vest.

For long line work, the pilots have access to different kinds of cargo hooks, which they can use to hang spacing buggies, set poles or transport bags of materials. Four passengers can sit comfortably in the HEC-equipped helicopters and depending on what job they are working on, multiple aircrafts may be working simultaneously.

“We may have one aircraft short hauling and the other long lining — it all depends on what we are doing at that particular time,” Schultz said.

As a multi-function utility, LADWP uses its helicopters for both power line patrols and inspections of the 473-mile Los Angeles Aqueduct system, which begins in the Eastern Sierra Nevada and provides on average, 27% of the annual water supply to Los Angeles. The aqueduct includes local transmission corridors as well as eight reservoirs.

Beyond these patrols, the pilots also provide personnel flights and perform security patrols.

“Having these four aircrafts allows us to respond to a lot of different needs at the department. HEC is another skill in the toolkit that we can use,” Schultz said.

Looking to the future, LADWP plans to use the HEC method for tower line construction and maintenance, wire stringing and marker ball replacements. So far, the utility has already used the work method to inspect towers and replace spacers in hard-to-access areas within its service territory.