The Platts Atlantic and Pacific shipping rates for LNG spot vessels have been assessed higher at $100,000/day, representing a year-to-date high for both basins.

The ballast rates in both basins were assessed at 100%, meaning owners are fully compensated while the vessel is ballasting.

In the Pacific, only one cold TFDE tanker was heard available for loading from now until H2 November The latest reported fixtures include Tangguh LNG taking Tokyo Gas’s Energy Glory to load between 2H October and early November. The day-rate heard was $130,000/day, and could be above round-trip economics. Meanwhile, Pavilion was heard to have fixed a steam vessel for a November 23 Bintulu load from mid-$50,000s to mid-$60,000s/day. 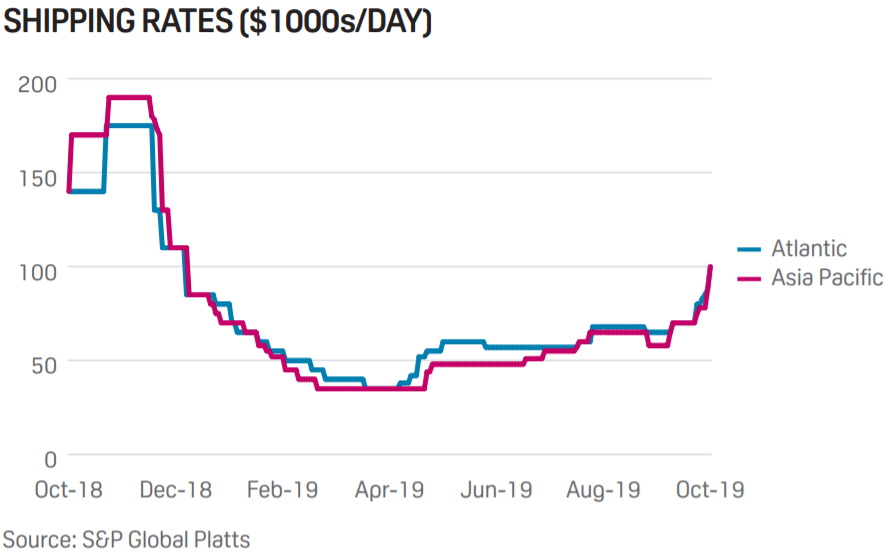 Several shipping sources said that, while the cold Energy Glory TFDE fixture was done at $130,000/day, it may not be representative of the market. One shipowner said that, as an example, the recently fixed steam vessels, priced in the $60,000s/day, could normalize to $90,000s to $100,000/day. The source added that the market is trending higher, with vessel inquiries lacking laycan, as charterers just want to find a ship in a particular basin.

In the Atlantic, one modern vessel heard available for loading until H2 November. The latest reported fixture was Gunvor taking the warm BW Aranda for a maiden voyage, which was heard last week. One shipping source said that the Atlantic market was increasing without a fixture, due to low supply. No result was heard yet for Pavilion’s inquiry for late November Cameron load.

Shipping typically accounts for 5%-20% of the delivered price ex-ship of LNG, meaning large movements in rates can have a significant effect on the final price of delivered gas.
Source: Platts