FedEx Corp. (FDX)  was mentioned by Jim Cramer during his “Mad Money” program Tuesday night, as the stock has been in a downtrend for the past two years. Traders and investors, thus, are pretty discouraged at this stage. But sometimes a fresh opportunity can be found by shifting through the charts of the “unloved.” Let’s check out the charts and indicators of FDX.

The 50-day moving average line bottomed in October and has turned higher in November. The trading volume looks like it has been stronger since the middle of October, suggesting that investors have become more interested in FDX in recent weeks. The On-Balance-Volume (OBV) line shows some improvement from early October, signaling that buyers of FDX are more aggressive. The Moving Average Convergence Divergence (MACD) oscillator recently crossed above the zero-line for an outright go-long signal and the indicator is still pointed higher unlike earlier crossovers.

In this weekly bar chart of FDX, below, we can see that prices are testing the declining 40-week moving average line. The weekly OBV line has turned up from late September and the MACD oscillator has crossed to the upside for a cover shorts buy signal.

In this Point and Figure chart of FDX, below, we can see a projected upside price target of $205. 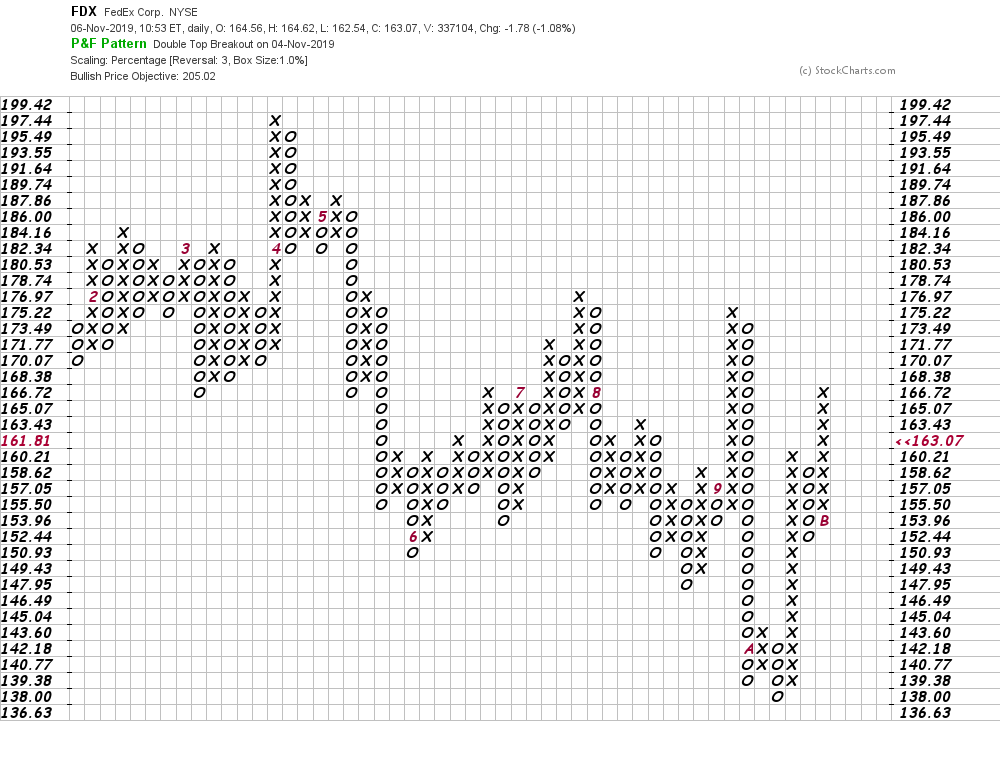 Bottom line strategy: Buy and hold investors in FDX have suffered the past two years, but now the charts are more positive. Aggressive traders could go long FDX here and risk below $150 looking for a rally above the April highs.

Get an email alert each time I write an article for Real Money. Click the “+Follow” next to my byline to this article.