Lufthansa’s logistics division reported its second loss in a row during the third quarter of the year as market conditions continued to take their toll.

The logistics division, which includes Lufthansa Cargo, time:matters, Jettainer and its share of AeroLogic, saw third-quarter revenues decline by 9.2% year on year to €598m, while earnings before interest and tax (ebit) fell to a loss of €49 compared with a €33m profit last year.

Despite this, cargo traffic for the period was up by 1.1% to 2.2bn RTK as the airline began selling bellyhold capacity on Brussels Airlines’ aircraft. The cargo load factor fell by 4.6 percentage points on last year to 58.8%.

It is the second quarter in a row the division has reported an operating loss – during April-June period it lost €10m.

The carrier said that results were affected by weaker pricing and demand, particularly in the Asia Pacific region, and higher costs as it took over the marketing of Brussels Airlines’ belly space and higher depreciation due to the investment in new freighters.

In response, the carrier is to speed up the retirement of its older MD-11F freighters. It currently operates 10 of the aircraft but plans to have exited the type by the end of next year, with two more set to leave this year.

It also today announced the order of two more B777Fs, which it said are more efficient than the MD-11Fs they will replace. In total, in plans to operate a fleet of nine B777Fs while it also has access to the cargo capacity of four Boeing 777Fs operated by AeroLogic, a joint venture between the German carrier and DHL.

“[A] cost-cutting programme is being implemented consistently and extended; fleet modernisation will bring further medium and long-term improvements to cost structures,” the company said in its third-quarter report.

The carrier is also modernising ground infrastructure in Frankfurt and has increased automation of sales and production. 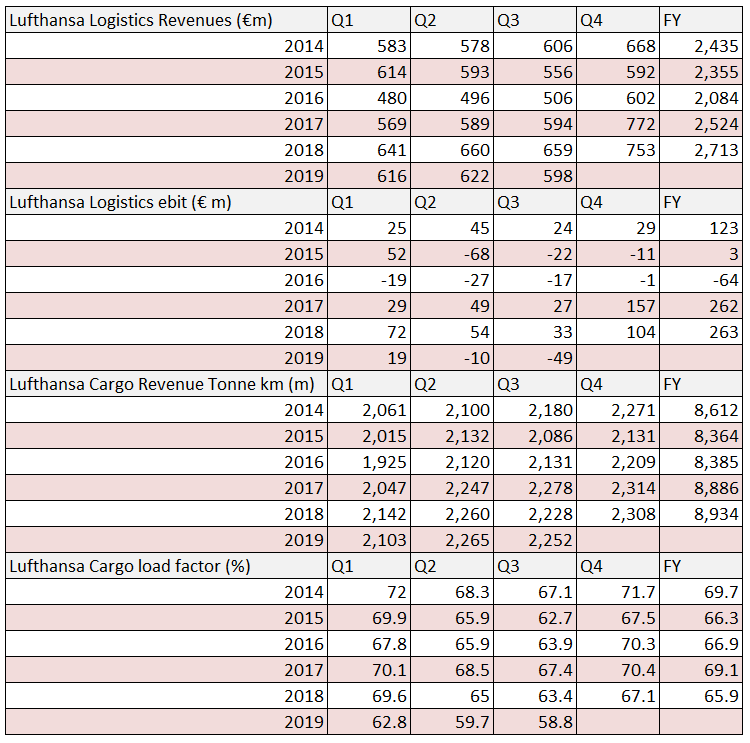