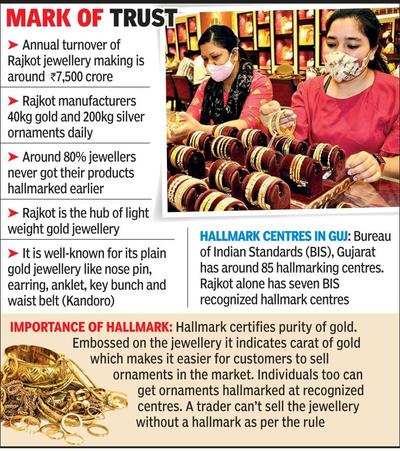 Rajkot: After the new law, making hallmarking of gold jewellery compulsory from June 16 came into force, hallmarking centres across Gujarat have been facing a huge pile up of inventory. The government has fixed the August 1 deadline to get backlog stock to get hallmarked.
Rajkot, the hub of lightweight gold jewellery design in the country, is especially facing the toughest challenges implementing the order owing to its lengthy procedure which has stalled supply to other states as well as abroad. The city manufactures around 40 kg gold jewellery every day. Industry sources claim that 80 percent jewellers in Rajkot never got their ornaments hallmarked earlier.
Hallmark gold is a sign of trust. But in making the mark mandatory, the labyrinthine process is proving to be very cumbersome for the jewellers. Estimates suggest that in a day, barely 10% of the orders are processed. “Earlier, we used to process an estimated 2,000 requests in a day, but now we barely manage some 150 orders,” said a well-placed source working with a hallmarking centre.
Earlier, the centre had to randomly check gold carat from 10% articles in one lot. But now, they have to generate a six digit HUID (hallmark unique identification number) for each article from a BIS portal. “The entire method of inspecting has gone online. We must upload all details like weight, volume, type of gold used, grammage and other information online on the BIS server. We cannot release it till we get the HUID number, which is taking time. As a consequence, there is significant piling up of gold at the hallmarking centres,” said the source.
Bhayabhai Soni, who runs the biggest hallmark centre in Rajkot, said, “We have to upload every detail on the portal and create job cards. We have to generate a minimum 400 mg scrap of one lot of jewellery and mention that detail too. The entire process takes nearly two hours and in one day we can hallmark only 50 pieces.”
Soni, who is also president of Rajkot gold dealers association, further said that server problems add to the long hours. According to a rough estimate around 70 to 100 kg gold ornaments lie piled up waiting to get a hallmark in Rajkot.
Industry associations seek ease in compliance of norms for hallmarking jewellery. Ramesh Lolaria, a consultant of jewellers on hallmark issues said, “We have suggested to the government to take a declaration from the traders of stock before June 16 and allow these to be sold without a hallmark. This will clear the huge backlog and waiting period.”
Divyesh Patadiya, president of Rajkot gems and jewellery association said, “Because of this waiting period, we have to make advance planning so that we can deliver ornaments to customers for marriage or festival which requires huge investment. Small traders can’t afford such investments.”
Jitendra Bhindi, a Junagadh jeweller who was part of the committee on hallmarking, said that the government is positive in addressing all the problems. “HUIN is definitely a serious issue and the government has already formed a separate committee to find a solution to that issue,” he said.
(With inputs from Niyati Parikh in Ahmedabad)