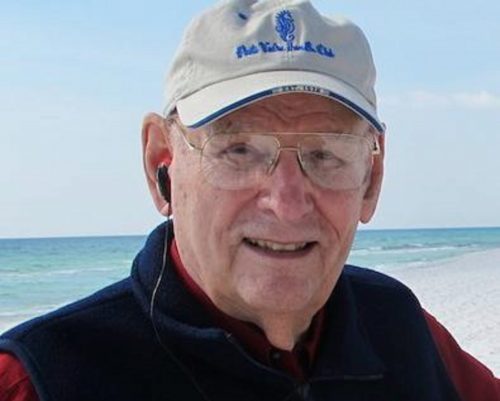 David A. Howard, a maritime industry icon who founded American Shipper Magazine at the time containerization in shipping was being universally accepted, died Sunday just two months short of his 100th birthday. Mr. Howard never lost his interest in the international trade and transportation industry and continued to stay involved until his passing.

Former Federal Maritime Commission Chairman Steve Blust, who knew Mr. Howard from his own career at the Jacksonville Port Authority some 35 years ago, said: “Dave Howard was a true leader in maritime media and a great individual.” He added: “He has left a legacy and cadre of fellow journalists, including his son, Hayes and grandson, Edward, who all continue to provide straight forward professional news and analytical information that helps keep the maritime community well informed and up to date.”

Mr. Howard commenced publishing the magazine in 1959 understanding that without shippers there would be no shipping and without shipping there would be no shippers or world trade. He verbalized the interdependence of the world’s oldest professions at American Shipper, providing significant understanding channels between the two entities in modern times.

With the support of the global community, in 1974 Dave Howard along with his son, Hayes H. Howard, turned the Florida Journal of Commerce, which he established in 1959, into the internationally accepted American Shipper Magazine. While David retired in 2000 at the age of 80, Hayes remained publisher until the sale of the magazine to FreightWaves earlier this year. Hayes has remained as head of the company’s BlueWater Reporting and ComPair Data, both handling data and analytics for the shipping industry, where he is now joined by his son, Edward Howard.

American Shipper has enjoyed a robust global audience from its inception for the clarity with which they communicated the realities of international commerce and the impact of containerization and intermodalism, as well as de-mystifying regulatory affairs around the world.

Michael J. DiVirgilio, a former executive with NYK Line and Ceres Terminals and president of the Containerization and Intermodal Institute noted: “Dave Howard was a visionary. His sense of how containerization would evolve as a major part of what is today’s supply chain was remarkable. He saw and wrote about that in the 70s. Few others had done that. He recognized the adversarial relationship between ocean carrier and shipper and used the magazine as a conduit to have both sides better understand each others’ points of view.” He added: “As young staff working for a major ocean carrier, the “American Shipper” magazine served as our textbook. We were fortunate to have it available.”

Hayes Howard noted that his father was an editor who held himself and his staff to professional journalism standards. “He appreciated good writing and also worked to hire the best communicators around. Until he became ill in recent months, he still had a critical eye when he read the magazine and considered himself involved in what was going on in ‘the industry.’ He had exceptionally high standards-not just for us, but for himself as well. He was disciplined in all he did.”

Joseph Bonney, a former managing editor of American Shipper, was quoted as saying Mr. Howard “was among the first to recognize that changes in regulation and technology were changing the way shippers operated, and that transportation was only one link in a company’s supply chain. He was covering logistics in detail when other publications – and even many in the industry – were still learning how to spell it.”

One of four children and the son of two teachers, David Howard was born February 14, 1920, in Nashville, NC. He was raised in Black Creek, NC. His three siblings, two of who are still living and one who passed away recently, lived to be more than 100 years old. The longevity of the family was part of a study done by the Mayo Clinic Health System.

He began at UNC as a math major and changed to journalism when he pulled a B grade in a math class. Graduating in 1940, Dave Howard began his first connection with the sea by joining the U.S. Coast Guard. He served in the North Atlantic, North Africa, the Caribbean and the Pacific during World War II.

In 1945 he began his journalism career with the international wire service, United Press International, in Raleigh, NC. He moved to Jacksonville, Florida, when he married Kitty Jo Hickman the following year. His assignment included maritime and port news when he worked as a reporter for the Florida Times Union. In 1951 at the urging of the shipping community, he established Howard Publications Inc., the publishing company that has remained a force since then.

The initial publication was Jacksonville Seafarer launched the next year. In 1959, a Florida-wide publication Florida Journal of Commerce commenced. Both regional publications gained national traction and were already well read, quoted and respected and were carrying international advertising when the FJOC morphed into American Shipper 15 years later.

A career business journalist himself, Joe Bonney attributed Mr. Howard’s “vision, persistence and hard work” for his success. Barbara Spector Yeninas, a maritime public relations executive who knew David Howard for more than 50 years since her days as a shipping journalist herself, said that he was “a one-of-a-kind self-starter whose opinions-often published-were honest and informative and mostly right-on. He was the kind of journalist who believed in the facts and not sensationalism. There are few such newspersons around today.” She added: “And he loved the industry.”

Mr. Howard was honored with many awards including the U.S. Propeller Club Man of the Year, recognition with a Lifetime Achievement honor by the Containerization & Intermodal Institute, and the Maritime Hall of Fame. In 2000, Howard became editor emeritus of American Shipper in 2000, a role he took seriously until it was sold to FreightWaves Inc. on July 1.

His wife passed away in 2000. David remarried two years later and is survived by wife, Nancy Cavanaugh Tucker. His older brother, Fred of Walton Beach, FL, died at age 104, earlier this year. His survivors include sisters Margaret Nicholson, age 103, of Winston-Salem, North Carolina, and Frances Norton, 101, of Moscow, Idaho.

Services are 2 p.m. Friday at Oaklawn Cemetery in Jacksonville. The family asks that in lieu of flowers, that contributions be made in his name to the Containerization and Intermodal Institute scholarship fund.