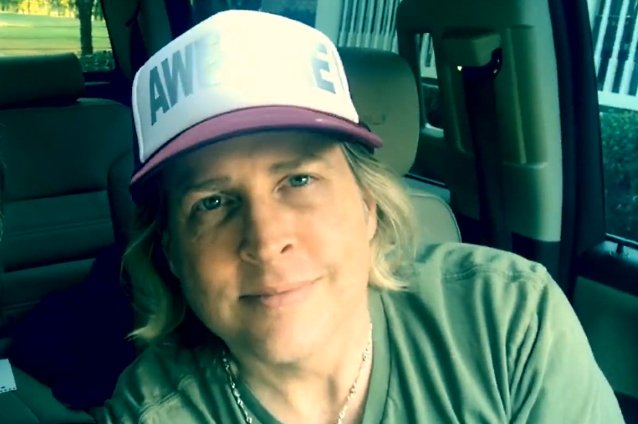 NELSON bassist/vocalist Matthew Nelson recently spoke with Trav of the Fargo, North Dakota radio station 95.9 KRFF. The full conversation can be streamed below. A few excerpts follow (as transcribed by BLABBERMOUTH.NET).

On the ongoing “Christmas With The Nelsons” tour:

Matthew: “We have a long tradition of entertainment in the family, and for anybody that was a fan of ours or is a fan of ours and was a fan of our father, Ricky Nelson, or grew up with ‘[The Adventures Of] Ozzie And Harriet’, we have a little bit of everything. It goes through 50 years of Christmases in the Nelson family. We open up our scrapbooks and tell stories and there’s a lot of comedy and a little bit of God, which is not a band thing, and Christmas classics done the way that Matthew and Gunnar interpret them. It’s not just a regular show that we’ve thrown a couple of Christmas songs into — it is Christmas stem-to-stern. The whole event starts with an ‘Ozzie And Harriet’ Christmas episode and winds up with the audience singing together. It is really fun… Christmas always meant something really, really important to the Nelsons, because we’re always out working and it was the one time of year where everybody stopped what they were doing, settled down, reconnected with each other, took stock of where we’ve come from [and] where we’re heading. It’s a really important time for us, and we go through all those memories in the family and let people through the Nelson front doors for the first time and welcome them in and have a great time.”

Matthew: “Gunnar and I wound up selling 10 million records to people who had no idea who Ricky Nelson and Ozzie and Harriet were, just like our father, I think, sold a lot of his. Yeah, he got a little bit of exposure value on ‘Ozzie And Harriet’ — he used to sing at the end of the show — but the kids that bought his records, they weren’t really ‘Ozzie And Harriet’ fans or the big band-era. I think when you look through it and look through the decades, we’ve always done something specific to us. I think the only time that we ever got anybody kind of comparing and contrasting had to do really more with journalists and people that didn’t really want to get into what we had to say musically or who we were or how we came up. Gunnar and I, we always wanted to do what we do. We started playing [when] we were about six years old [and] started writing and playing in nightclubs in L.A. when we were 12. We worked really hard — I think a little harder than most people needed to, because we had a lot of people that we would run into that kind of wanted to show us what reality was for the first time. We don’t really talk about all that stuff, but we just looked it as, ‘Well, we’ve got each other, and it just makes us work harder, because one day, we’re going to need to be that tough and [have] that thick skin.’ That’s what it takes — I don’t care if you’re a legacy coming from a sports family. Our uncle is [actor] Mark Harmon, and Mark was a quarterback at UCLA and a great athlete. His father won the Heisman Trophy — our grandpa Tom at Michigan in 1940. When he was coming up and trying to make his own way, everybody was always saying, ‘Oh, can you [fill] those shoes?’ The reality of it is, we’ve always learned to do what is we do best, and as my Uncle Mark says — and it’s really true — ‘They can’t take the work away from you.’ As long as you do great work. Gunnar and I have distilled it down to our three rules of success — be undeniably good; don’t lose your sense of humor; don’t be a jerk. Those three rules will get you a long way.”

On whether the band plans to commemorate the upcoming 30th anniversary of its debut album, “After The Rain”:

Matthew: “We’re working on that right now. We have an interesting situation here — just music business stuff. We have been talking to the parent label that absorbed DGC or Geffen Records, where ‘After The Rain’ came out way back in 1990. They’ve been talking about doing something special. We just located the analog masters for a live concert that we filmed when we did our ‘More Than Ever’ video. It was a whole concert down at the Olympic Auditorium in Los Angeles. It’s never been mixed, and what I’d like to do, since I got a chance to remaster from the analog masters last year ‘After The Rain’. We did a 180-gram vinyl audiophile release of it, but I’d like to bundle it with a live concert because we never did that. NELSON toured for 14 months. Every day, we played a show all over the world, and it’s remarkable that, unfortunately, due to a fire, it appears, on the Universal lot, that the video portion was destroyed. They can’t find it… It just goes to show you, when you get a chance to see a band that you want to see, don’t postpone that. Go and see them. I’m not saying we’re on the same level, but I always regret the fact that I really wanted to see Tom Petty before he passed, and I said, ‘I’ll get him next time,’ and there wasn’t one. For any artist, [if] you get a chance to see a live show, go support it.”

In a 2011 interview with They Will Rock You, Matthew‘s brother Gunnar mentioned wanting to release the full Olympic Auditorium concert. “We spent a lot of money to bring in a mobile track, really kick-ass audio system [with] seven separate camera angles,” he said. “I have checked with my old contacts at Geffen, and they cannot locate the master tapes. We spent close to $200,000 on that video shoot, and those tapes have to be in someone’s vault. I’m on the prowl for it as we speak.”

To comment on a
BLABBERMOUTH.NET
story or review, you must be logged in to an active personal account on Facebook. Once you’re logged in, you will be able to comment. User comments or postings do not reflect the viewpoint of
BLABBERMOUTH.NET
and
BLABBERMOUTH.NET
does not endorse, or guarantee the accuracy of, any user comment. To report spam or any abusive, obscene, defamatory, racist, homophobic or threatening comments, or anything that may violate any applicable laws, use the “Report to Facebook” and “Mark as spam” links that appear next to the comments themselves. To do so, click the downward arrow on the top-right corner of the Facebook comment (the arrow is invisible until you roll over it) and select the appropriate action. You can also send an e-mail to blabbermouthinbox(@)gmail.com with pertinent details.
BLABBERMOUTH.NET
reserves the right to “hide” comments that may be considered offensive, illegal or inappropriate and to “ban” users that violate the site’s Terms Of Service. Hidden comments will still appear to the user and to the user’s Facebook friends. If a new comment is published from a “banned” user or contains a blacklisted word, this comment will automatically have limited visibility (the “banned” user’s comments will only be visible to the user and the user’s Facebook friends).