NASA contracts SpaceX to launch another Dragon filled with cargo


The 19th SpaceX Commercial Resupply Services (CRS-19) contract mission for NASA carries a variety of cutting-edge scientific experiments to the International Space Station. The Dragon cargo spacecraft blasts off from Cape Canaveral Air Force Station in Florida on a Falcon 9 rocket no earlier than Dec. 4, 2019. Its payloads include investigations studying malting barley in microgravity, the spread of fire and bone and muscle loss, which will be added to the dozens of research projects already under way aboard the microgravity lab.

The space station, entering its 20th year of continuous human presence, provides opportunities for research by government agencies, private industry, and academic and research institutions. Such research supports Artemis, NASA’s missions to the Moon and Mars, and leads to new technologies, medical treatments and products that improve life on Earth.

Read more about some of the scientific investigations riding on Dragon to the orbiting laboratory on CRS-19.

A Better Picture of Earth’s Surface

The Japanese Space Agency (JAXA) Hyperspectral Imager Suite (HISUI) is a next-generation, hyperspectral Earth imaging system. Hyperspectral imaging has high resolution across all colors of the light spectrum, providing more information about the characteristics and physical properties of a target. Every material on the Earth’s surface – soil, rocks, vegetation, snow, ice and human-made objects – reflects a unique spectrum of light, making it possible to identify specific materials in an image.

HISUI provides in-flight performance verification of the system and its acquisition of data, as well as its usefulness for various tasks such as resource exploration and applications in agriculture, forestry and other environmental areas. This investigation is a follow-on to the Advanced Spaceborne Thermal Emission and Reflection Radiometer (ASTER) on NASA’s TERRA satellite.

Barley contains antioxidants, vitamins and minerals. Malting converts starches from the raw grain into various sugars suitable for use in brewing, distilling and food production. Understanding how barley responds to microgravity could identify ways to adapt it for nutritional use on long-duration spaceflights. Malting ABI Voyager Barley Seeds in Microgravity tests an automated malting procedure and compares malt produced in space and on the ground for genetic and structural changes.

The AztechSat-1 investigation demonstrates communication between a CubeSat and the GlobalStar Constellation satellite network in low-Earth orbit. Such communication could reduce the need for ground stations, lowering the cost and increasing the number of data downloads possible for satellite applications. Inter-satellite communication is critical to future human space exploration. Its reduced cost and increased data capability also could improve many satellite-based services used by people on Earth. The CubeSat will be deployed from the International Space Station’s Japanese Experiment Module airlock. This is the first CubeSat built by students in Mexico that will launch from the space station.

The Spread of Fire

Understanding how fire spreads and behaves in space is crucial for the safety of future astronauts and for understanding and controlling fire here on Earth. The Confined Combustion investigation examines the behavior of flame as it spreads in differently-shaped confined spaces in microgravity. More specifically, it will look at the interactions between spreading flames and surrounding walls. The spread of flames in confined spaces (such as buildings and vehicles) may pose a more serious fire hazard than flame spread in open spaces because of acceleration caused by heat radiating back from the surrounding walls. Studying flames in microgravity gives researchers a better look at the underlying physics and basic principles of combustion by removing gravity from the equation.

The goal of Rodent Research-19 (RR-19) is to investigate a proposed method of preventing bone and muscle loss. The human body evolved within the constant pull of Earth’s gravity. Astronauts have to exercise for multiple hours every day to prevent bone and muscle atrophy during their stays in space. Bone and muscle atrophy also occurs during normal aging, due to a sedentary lifestyle and during illnesses. RR-19 investigates myostatin (MSTN) and activin, molecular signaling pathways that influence muscle degradation, as possible targets for preventing muscle and bone loss during spaceflight and enhancing recovery following return to Earth. This study also could support the development of therapies for a wide range of conditions that cause muscle and bone loss on Earth.

Nobody wants a spacecraft to spring a leak – but if it happens, the best thing you can do is locate and fix it, fast. That is why NASA launched the Robotic External Leak Locator (RELL) in 2015, and a second RELL in April 2019. Operators can use these tools with the Dextre robot to quickly detect leaks outside of station and help engineers formulate a plan to resolve an issue. On CRS-19, NASA is now launching the Robotic Tool Stowage (RiTS), a docking station that allows the RELL units to be stored on the outside of space station, making it quicker and simpler to deploy the instruments. Outside storage eliminates the need to rely on crew member and airlock availability to move a unit to the outside. These capabilities can be applied to any place that humans live in space, including Gateway and eventually habitats on the Moon, Mars and beyond.

CRS-19 carries upgrades for the Cold Atom Laboratory (CAL), a multi-use facility that produces clouds of atoms chilled to temperatures much colder than deep space. Atoms have almost no motion at such low temperatures, making it possible to study fundamental behaviors and quantum characteristics that are difficult or impossible to probe at higher temperatures. Microgravity may allow for cooling to even colder temperatures than on the ground, and also allows researchers to observe atom clouds for longer periods of time. The new package launching on CRS-19 will include hardware that will allow scientists to make subtle measurements of gravity. This could enable scientists to probe fundamental theories of gravity and lead to the development of improved sensors that can be used for spacecraft navigation and to study Earth’s climate.

These are just a few of the many investigations currently being conducted aboard the orbiting laboratory. For daily updates, follow @ISS_Research, Space Station Research and Technology News or our Facebook. Follow the ISS National Lab for information on its sponsored investigations. For opportunities to see the space station pass over your town, check out Spot the Station. 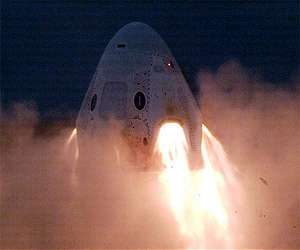 
SpaceX has completed a series of static fire engine tests of the Crew Dragon spacecraft in advance of an in-flight launch escape demonstration, known as the In-Flight Abort Test.

The engine tests, conducted near SpaceX’s Landing Zone 1 on Cape Canaveral Air Force Station in Florida, began with two burns for a duration of one-second each for two of Crew Dragon’s 16 Draco thrusters.

The Draco thrusters are used for on-orbit maneuvering and attitude control, and would also be used for re-orient … read more