No end in sight to the industry’s supply chain woes 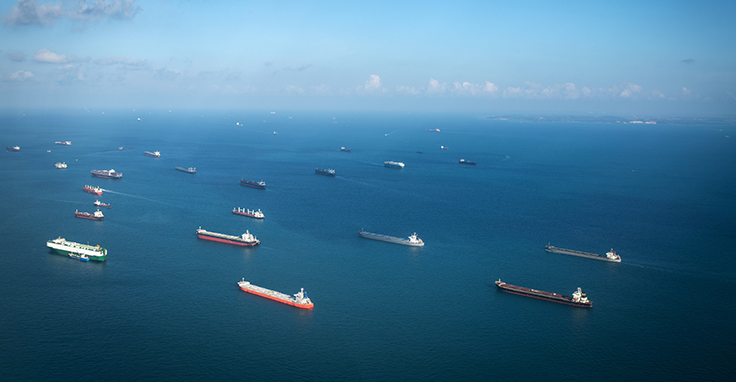 Today’s supply chain is very much a global one, but pandemic-induced issues are contributing to a slowdown in equipment, parts and raw materials from overseas. Photo: taikrixel/E+/Getty Images

Getting everyone on the same page about anything is a unique feat. But dealers everywhere seem to agree that the supply chain they currently face is as chaotic as any they’ve ever seen.

COVID-19 is to blame, creating ripple effects on equipment availability, lead times and pricing. Nobody knows when the supply chain storm will calm, either, churning up uncertainty among customers who fortunately continue to produce.

“We’re a unique dealer who deals with several manufacturers, and it doesn’t seem like any of them are in a better position than others,” says Micah Tysver, aggregate business development manager at General Equipment & Supplies, which is based in Fargo, North Dakota. “Everybody is competitive with pricing, with raw material costs up and significant price increases.”

Prices are still moving upward, too.

“We always get our price increases at the beginning of the year, which we did this year,” says Mike Murphy, owner of Aggregate Crusher Specialists, a dealer serving the West. “But now we’re seeing second and third increases over the last 30 days. Steel supply is pretty hard. Product deliveries are just horrible. Whether it’s coming from out of the country or from within, getting raw supplies and manufacturing something is really getting hard to do.”

Even when victories are seemingly within a dealer’s grasp, a last-minute supply chain development can throw a plan off track.

“We get to a point where machines are supposed to ship in a week and find out there’s a delay in components – and it takes two months to get components to complete,” says Andy Schwandt, vice president of sales and marketing at Road Machinery & Supplies, which serves the Upper Midwest. “It will probably continue to be challenging in the near future.”

Murphy sees many of the same shipping dynamics at play.

The unsettling thing is that no one knows when the supply chain will settle down. It could be many months more before stability arrives.

“I went to [the] AED [Summit] to talk to some of the manufacturers,” Murphy says. “They’re all very concerned. They didn’t see an end in sight, as well. It’s very volatile. Nobody knows.”

Customers through the chaos 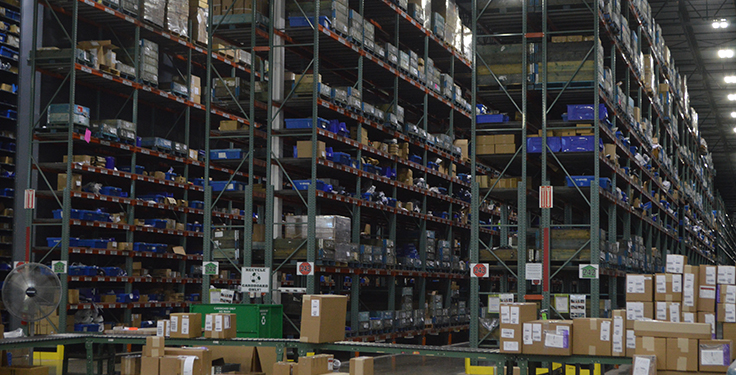 Although dealers are trying to ramp up their inventory, they must aim to strike the right balance so they aren’t sitting on too much equipment and parts next year and beyond. Photo: P&Q Staff

Many aggregate producers were upset when issues first surfaced in the supply chain months ago. Eventually, however, producers realized their dealers weren’t the only ones facing serious supply challenges.

“If everybody comes back with the same song and dance and realizes what this is, they are more understanding yet still needing equipment,” says Sy Harrison, COO of Goodfellow Corporation, which serves the West. “But you’re constantly pulling rabbits out of your hat. You literally run out of whatever it is you need – and it’s not just you. It could be everybody across the board.”

Tysver’s experience with the current supply chain is much like Harrison’s in that customers have grown more understanding the deeper everyone gets into the chaos.

“It was more challenging at the end of 2020,” Tysver says. “In early 2021, customers would get their capex money, place orders and some wanted the equipment available by the late first quarter.”

Lead times got pushed out remarkably around that time, he says.

“It did create some challenges for our customers at that time,” Tysver says. “They were hesitant to accept those lead times and answers from us. But the more customers talk to other dealers, they realize everybody is in the same boat. And they’re starting to accept that it’s not just General Equipment, but it’s everybody.”

Still, with so many unknowns, regular communication from the dealer to the producer is a must.

“We started seeing all of this happening early in the year,” Schwandt says. “We did a training with our sales group on scarcity of supply and how we should communicate that with customers. We tried to get ahead of that as much as we could from a communication standpoint. A lot of it comes down to clearly communicating so we can make plans.”

“We increased our used equipment fleet, and we’re working with suppliers to have higher-turning products in stock,” Schwandt says. “But there are going to be times when we don’t have what you need. We’re working our best to prepare and try to source parts and equipment that we need.”

“There’s going to be lots of equipment that needs to be repaired this year, so capex will likely be strong next year, as well,” Schwandt says. 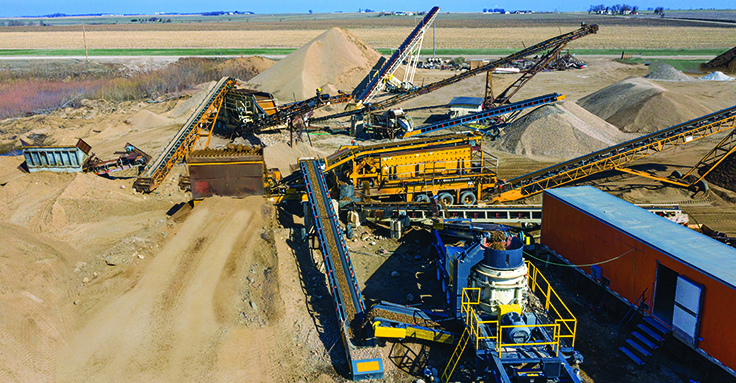 While preventive maintenance practices are good short-term measures for customers to enact, dealers are actively adjusting their plans to ensure they meet market demands.

Dealers should be somewhat careful as they stock up, Tysver adds.

“We have to be cautious not to go too heavy on our inventory stock orders at this time,” he says. “I do believe within 18 to 24 months – and that’s just a rough guess – that these crazy prices are going to level off and come back down slightly. We don’t want to be sitting on inventory that is significantly higher in value than comparable inventory in the industry. That’s going to create challenges to remain price competitive with customers.”

As Harrison describes, staying competitive is about making continuous adjustments.

“As our vendors make moves on our business, I’m counteracting their moves to make sure I’m in control of our success,” Harrison says. “For us, it’s about getting ahead of the curve and figuring out how far [out] that curve is so we can make adjustments.”

One plus for dealers is that orders are in a good place. Tysver says General Equipment’s orders, for example, are coming in as strong as they have in the past couple of years.

“Getting our hands on machines is the killer right now,” Murray says. “There are like 26 Powerscreen dealers in America, and we’re all fighting to get the next new machine from Terex. It’s hard.”

COVID-19 restrictions continue to present challenges with factories, he adds.

“We place an order with Terex in America, and then we get the orders sent through to [Northern] Ireland where the machines are built,” Murray says. “The COVID restrictions of every country are different. Machines coming out of the factory have slowed due to different regulations. Every country’s regulation is different.”

Factories are slowing down, in some cases, because of labor shortages. A shortage of critical components – ones needed to complete a crushing or screening plant – is also prevalent.

“They’re waiting on vendors to provide them the parts to build the machines,” Murray says.

Not surprisingly, then, equipment lead times are stretched out.

“Lead times are like never before,” Tysver says. “It used to be that 12- to 16-week lead times for certain units or a piece of equipment were standard. Now, if you’re seeing anything under 18 to 20 weeks, you’re surprised.”

Murray agrees lead times are unlike anything he’s previously seen.

“We’re trying to place orders into 2022 just to get in line at the factory,” he says. “Everyone is trying to get their place in the queue.”

But customers are becoming more accepting of current lead times.

“I have people ordering equipment that they know they’re not going to get for six or eight months,” Harrison says.

A shortage of new equipment is prompting dealers to look more intently at used marketplaces.

“There’s definitely a premium on used equipment right now,” Murray says. “We are looking everywhere we can for used Powerscreens – auctions, online, IronPlanet, Ritchie Bros. [and] little podunk, middle-of-nowhere places. We have to because we know getting our hands on a Powerscreen is limited.”

Once used equipment is purchased, dealers like Powerscreen Crushing & Screening will tidy machines up and, once again, prepare them for the market. Goodfellow Corporation goes this route, as well, acquiring used equipment and the necessary parts to make them viable processing machines.

“We’ve definitely done more critical rebuilds,” says Harrison, adding that rebuilding equipment strains parts availability because parts that might otherwise be utilized for a new crusher instead go into a used one.

Matt Dibble, a member of the sales team at Dibble Equipment, says parts availability is better right now than equipment availability. Chris Harris, the con/agg manager at Ohio Cat, argues that parts can always be made fabricated.

“While we have seen interruptions with parts, it’s not uncommon for a company to say they’re going to build one,” Harris says.

Harris also contends that the state of the supply chain might lead to more investments in domestically made equipment and parts.

“There’s maybe been a bit of return to valuing ‘made in America,’” Harris says. “I think we saw what can happen. We’ve become a global economy, but we’ve seen what can happen if we rely [globally].”

Murphy, for one, believes globalization is a source of today’s supply woes.

“My small bubble in California will never see steel manufacturing,” he says. “But, hopefully, it can come back. We get into trade deals with other countries, and I think a lot of it has to do with the volatility now.”