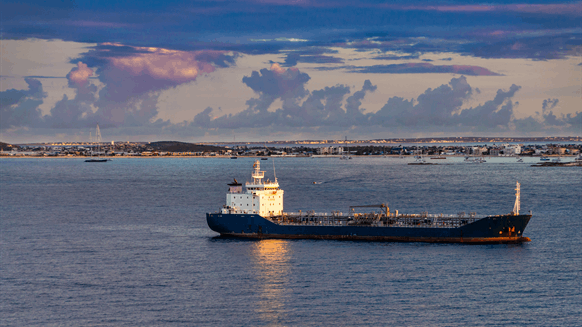 The fate of at least 15 oil tankers idling off the coast of China holds the key to determining the path of global freight rates.

(Bloomberg) — The fate of at least 15 oil tankers idling off the coast of China holds the key to determining the path of global freight rates.

The vessels are owned by a unit of Chinese shipping giant COSCO that was sanctioned by the U.S. in late September for carrying Iranian oil. They’ve been floating off the coast for over a month, ship-tracking data show, in limbo as owners, charterers and potential customers await clarity over the sanctions.

For as long as they’re stuck there, effectively removed from the market, global freight rates are likely to remain supported. The impact of the sanctions was magnified by the fact that many customers avoided booking any COSCO vessels due to confusion over whether they would run afoul of the U.S. In the weeks after the penalties were announced, shipping fees spiked and, while they’ve since retreated, they’re still well above where they were.

Some clarity could come on Dec. 20, a U.S.-imposed deadline for charterers and business partners of the companies to wind down their activities. COSCO’s lawyers have been in discussions with American authorities regarding potential sanctions relief, while the Chinese government has also reportedly asked the White House to lift the penalties as part of trade-deal negotiations.

“The ships are likely waiting for more sanction clarity after Dec. 20,” said Michal Meidan, director of the China Energy Program at the Oxford Institute for Energy Studies. This could take a while and unless COSCO Shipping can clearly explain its ownership structure to the market and insulate itself from the sanctioned units, these vessels, as well as some of the company’s other ships, may remain offline for a few more months, she said.

It’s unclear if any of the 15 or so vessels, owned by COSCO Shipping Tanker (Dalian) Co., have been transferred to other COSCO units. Nobody at COSCO Shipping Energy Transportation Co., the Dalian unit’s parent, or China COSCO Shipping Corp. answered phones or responded to emails seeking comment.

The Baltic Exchange Dirty Tanker Index, a gauge of the costs of shipping crude and fuel oil, surged 130% to an 11-year high on Oct. 14. It’s still 48% higher than just before the penalties. The higher costs have also flowed through to vessels carrying fuels such as gasoline and diesel, with the Baltic Exchange Clean Tanker Index also at elevated levels.

Tanker rates are also under upward pressure as some vessels have been removed from the market to prepare for International Maritime Organisation rules being introduced Jan. 1. The standards, known as IMO 2020, limit the amount of sulfur in shipping fuel unless pollution-reducing kits are installed.

Around 45 ships were affected by the U.S. sanctions, Huang Xiaowen, an executive vice president at COSCO Shipping, said last month without elaborating. COSCO Shipping Energy Transportation had a fleet of 50 VLCCs as of June 30, according to its website.

It’s not clear if more or fewer ships will ultimately end up being sanctioned beyond the Dec. 20 deadline, so there could be some more upside risk to freight rates, said Li Li, research director at Shanghai-based commodities researcher ICIS-China.

The Chinese shipping giant has reshuffled some of its assets to move vessels out of the sanctioned units. COSCO’s Dalian unit transferred 50% of China LNG Shipping (Holdings) Ltd. to COSCO Shipping Energy Transportation, according to a filing to the Hong Kong Stock Exchange in late October.

“It’s hard to predict an outcome here, especially if the COSCO sanctions become immersed in the protracted, erratic trade, geopolitical and diplomatic skirmishing between the U.S. and China,” said John Driscoll, chief strategist at JTD Energy Services Ltd. “Sanctioned vessels can’t hold out indefinitely and may already be devising loopholes to circumvent the restrictions.”


Generated by readers, the comments included herein do not reflect the views and opinions of Rigzone. All comments are subject to editorial review. Off-topic, inappropriate or insulting comments will be removed.


MORE FROM THIS AUTHOR