On-Demand Warehouse/Transportation: LS2, Cranking up the speed of delivery 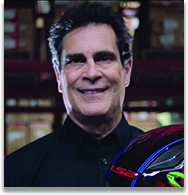 Phil Ammendolia was on a business trip in Maine when he realized that the fulfillment model his manufacturing company was using for more than 20 years was no longer good enough for today’s fast-paced business world. Customers loved LS2 Helmets, but they just weren’t willing to wait days on end for them to be delivered.

“I was showing our products to our local distributor rep in Maine, and he seemed very impressed with our helmets and loved our programs and margins,” recalls Ammendolia, president and CEO of the Aurora, Ill.-based manufacturer, “but he wasn’t going to place an order. He knew that if he stocked the product, he’d have to maintain reasonable inventory levels.”

By serving brick-and-mortar motorcycle retailers that stock its helmets in their stores, LS2 has established a broad base of dealers nationwide. These dealers are critical because the company doesn’t sell directly to any individual customers, rather, it sells to wholesalers and distributors. But with just one warehouse location in Illinois, the manufacturer’s West and East Coast deliveries were taking as much as four or five days.

If customers walked into a store and couldn’t find the LS2 helmet they were looking for, they were likely to leave the store and buy the helmet online if the dealer couldn’t get the product restocked from LS2 by the following weekend. Once that reality sank in, Ammendolia realized that the most competitive pricing and highest-quality products in the world wouldn’t help LS2 get its helmets to their destination within the desired timeframe.

“I came back from that trip realizing that I had to do something,” says Ammendolia, who was primarily concerned with the amount of time it took to get deliveries to customers located on both the East and West Coast. Some of LS2’s competitors were shipping from five to 10 different warehouses nationwide. This took significant investment, but it also meant that the companies could essentially serve the entire continental U.S. with overnight deliveries.

For LS2, the solution was to develop a broader distribution network that positioned its helmets closer to those dealers. It was soon clear that the legacy fulfillment models of either purchasing another warehouse or partnering with a third-party logistics provider (3PL) were going to be constricting, expensive and risky. 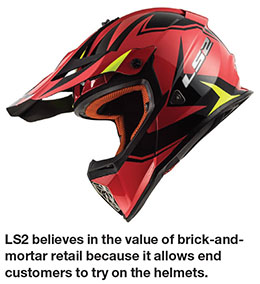 Ammendolia and his team began looking for third-party partners. Their wish list included a platform that was scalable and testable for LS2’s expanding brand; that didn’t tie the manufacturer into long-term commitments; and that would help the company adapt to meet its customers’ demands.

“Our UPS representative told us about Ware2Go and it sounded intriguing,” says Ammendolia. A flexible and on-demand warehousing and fulfillment network, Ware2Go enables seamless inventory and order management. “We set up a meeting with them and the platform seemed to be pretty foolproof and flexible,” Ammendolia recalls. “The costs are also reasonable.”

Working with Ware2Go, LS2 opened a new warehouse in Salt Lake City and then later moved it to Reno to be closer to its West Coast dealer network. Knowing that it didn’t want to build a distribution center in California, the helmet manufacturer looked to Nevada instead. Reno immediately surfaced as a good option for its central location on the West Coast.

“We decided that it was more important that we get to both Los Angeles and Seattle versus just to San Diego within a certain timeframe,” says Ammendolia. “Ware2Go can cover all of those destinations from Reno, so that’s where we went.”

LS2’s history dates back to China in the 1990s, when Arthur Liao first borrowed $500 from his parents to start a small helmet manufacturing business out of his home. Today, LS2 maintains headquarters in Barcelona, but it also has a global presence. It expanded into North America in 2011 and established its U.S. headquarters in Aurora.

Upon setting up shop in the United States, LS2 experienced near triple-digit revenue growth on a year-over-year basis, and top-line growth has continued to be strong, averaging 65% per year in the last four years. Ammendolia joined the company in 2012 and says because he’s “not a logistics expert,” the on-demand warehousing model complements LS2’s strengths perfectly.

Using that model, LS2 gets an affordable, pay-as-you go arrangement that puts it in touch with a wide network of transportation options. The manufacturer is also leveraging Ware2Go’s supply chain insights to get actionable data; receive recommendations on locations for its distribution networks; and better control both its inbound and outbound freight costs.

Since expanding its fulfillment and shipping model, LS2 has increased its delivery speed by 60% and reduced its West Coast delivery times down to one or two days from the previous four or five days. “This helps our motorcycle dealers compete with the big online guys,” says Ammendolia, who believes in the value of brick-and-mortar retail for allowing end customers to come in, shop around and try on the helmets.

By strengthening those retailers’ inventory positions, LS2 can support a broader network of dealers who no longer have to “be afraid that a customer will walk in with a cell phone in hand, ready to place an online order with another seller,” says Ammendolia.

Early on, Ammendolia says that he was apprehensive about handing over control of LS2’s inventory and fulfillment to a third party. “It was less about the cost of doing it, and more about how difficult it would be to stay on top of our inventory when it was out of our sight,” says Ammendolia, who moved into his current role in 2018. He says the fact that Ware2Go is backed by UPS made the decision easier.

“Some of the staff from UPS got involved as we were putting this all together,” he explains, “and Ware2Go sent a couple of logistics experts out to our warehouse to help us get up to speed on some of the latest and greatest in supply chain packaging techniques and technology.”

When it looked into building a warehouse in northern Nevada, for example, LS2 quickly realized it would be an extensive, capital-intensive project. “That would have basically created another full-time job for me, and I already have three of those,” says Ammendolia. “I don’t need another one.”

With Ware2Go, LS2 gets a safe, secure place to store its inventory. All orders are shipped same day or next day if they don’t meet the daily cutoff time, allowing LS2 to do what it does best: design and make some of the world’s best motorcycle helmets. Along with adding on-demand warehousing to its portfolio, LS2 also transitioned from floor-stacked pallets to warehouse racking, and concurrently implemented both an SAP enterprise resource planning (ERP) and warehouse management system (WMS).

According to Ammendolia, one of the unforeseen benefits of adopting an on-demand warehousing environment has been the supply chain flexibility and scalability that the manufacturer now has. For example, it’s now ready to replicate its West Coast success on the East Coast—a move that it will make in early 2020. “Once that happens,” he says, “we’ll be able to service the majority of the United States in two days or less.”

Ware2Go also helped LS2 select warehouse locations, factoring in considerations like the cost of shipping from one location (i.e., Salt Lake City) versus another (Reno). “The move to Reno saved us quite a bit per-container and improved shipping times to the most western region,” says Ammendolia, “which is the area that we really needed to be able to service the best.”

Other unexpected benefits included the platform’s ability to “cover” while the manufacturer shored up aspects of its own warehousing and fulfillment approach. “You don’t foresee disaster, so to speak,” says Ammendolia, whose team ran into challenges during its technology overhaul. “Ware2Go sent experts who spent time with us, helping our warehouse manager map out changes and policies. That’s priceless.”

Finally, Ammendolia says the provider’s in-depth knowledge of the shipping environment and transportation costs make it an invaluable partner for LS2. “We can always compare and see whether we’re getting the right rates and the best deals,” he explains. The manufacturer has a customer service employee who staffs the portal during the day and that makes decisions about what to ship from where and when.

“It’s that simple,” says Ammendolia. “I’m not trying to be a supply chain expert. I’m trying to get my products to my customers in a timely fashion. Because of this, ease of use is key.”

Looking ahead, Ammendolia anticipates further integration of Ware2Go into LS2’s new SAP system. When that happens later this year, the on-demand warehousing platform will be more integrated with its ERP. “We’ll still use the portal of course,” says Ammendolia, “but at that point it’ll actually talk to our system.”

Today, when LS2 is considering a new shipping location, it calls on Ware2Go to help with the decision-making process. If the decision comes down to Kansas or Texas, for example, the on-demand warehousing provider will typically present anywhere from three to five potential points of distribution for the manufacturer to choose from. “We get to weigh out the pros and cons of each,” Ammendolia adds, “and figure out which one best meets our goals as a company.”

The Keys to Lower Inventory Costs